Calling the life ban imposed on S Sreesanth "bizarre", his lawyer Rebecca John said the tainted pacer will challenge the BCCI's decision in court as it is "completely against the principles of natural justice".

Sreesanth was banned for life by the BCCI after being found guilty of spot-fixing in the IPL in an internal inquiry conducted by the Board's Anti-Corruption and Security Unit chief Ravi Sawani. 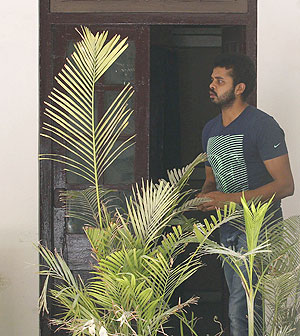 "The (BCCI) order is completely against the principles of natural justice," John told ESPNcricinfo.

"It has based its findings on personal interactions with members of Delhi Police as well as taken material from the chargesheet that has been filed by the police before a sessions court.

"If that is so then they should have waited for the court to determine whether or not any of this holds up in legal proceedings," she pointed out.

John described the Sawani report as "loose" and questioned the basis of its findings.

"They just picked up conversations they had with members of Delhi Police where they said Sreesanth and other members of the cricketing community confessed before them. It is a very, very loose report with little or no substance in it," John said.

She asked how the evidence which wasn't enough to keep the accused players in jail, could be considered proof of their guilt by the BCCI. Sreesanth, along with four other cricketers, is currently out on bail after spending quite a few days in jail.

"The fact is that the sessions court has released players on bail and said none of this adds up as a case. (The court said) it is very, very tenuous -- the link between whatever bookie you are saying had a role to play and the players, particularly Sreesanth, and granted him bail," she said.

"And then this BCCI's one-man committee says that Sreesanth is guilty of spot-fixing and hands over a life sentence to him. Not only is it is excessive, it is completely contrary to all principles of natural justice," she reasoned.

John said Sawani's findings are based on conversations with policemen who are investigating the case, which cannot be enough to impose a life ban.

"How does he come to a conclusion? By having personal conversations with police officials? And you are basing your findings on these?" she asked.

"If you want to read these audio tapes, which are part of the Delhi Police (evidence) in a criminal trial, the link is so tenuous. You will believe it only because the Special Cell of Delhi Police is saying you will have to believe it in a particular way. In any case these are allegations which have to be assessed, processed and a finding has to be determined by a court of law," John said.

She claimed that the life ban was imposed at the behest of BCCI's President-in-exile N Srinivasan.

"The only reason the life ban was imposed -- Mr Srinivasan was very keen to tell the public and the people of India he was treating (the issue) with a heavy hand and some people had to be made scapegoats," John said.

"What is more annoying form the point of the view of the players is that they have let the big fish get away. What happens to Mr Srinivasan? He is the owner of Chennai Super Kings and there is a case of conflict of interest pending in the Supreme Court against him.

respectively) from corruption charges," she added.

John said her client has been made a scapegoat in the entire scandal.

"Now when the BCCI, of which Srinivasan is the de facto or de jure head, conducts itself in this kind of fashion and then it hands over these sentences to players, who are soft targets, it is a little bizarre," John said.