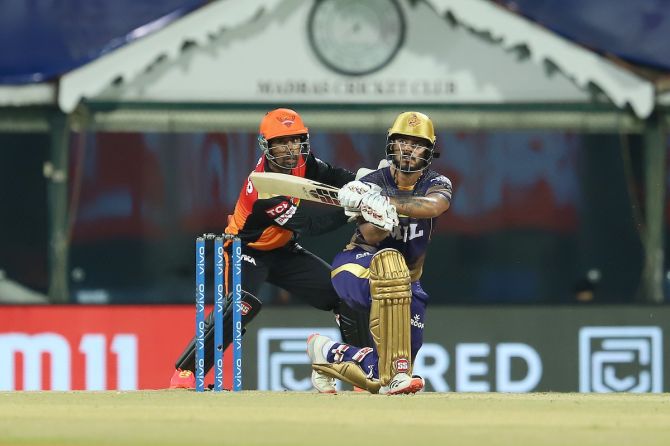 IMAGE: Kolkata Knight Riders opener Nitish Rana sends the ball to the boundary during the IPL match against Sunrisers Hyderabad, in Chennai, on Sunday. Photograph: BCCI

Kolkata Knight Riders excelled with bat and ball to beat Sunrisers Hyderabad by 10 runs in their opening match of Indian Premier League 2021, at the M A Chidambaram stadium, in Chennai, on Sunday.

Powered by blazing fifties from opener Nitish Rana and Rahul Tripathi they put up an imposing 187 for 6 and then restricted the Sunrisers to 177 for 5 despite a gutsy 61 not out by Manish Pandey (61) and Jonny Bairstow's 55.

There was some big hitting from Pandey, Mohammed Nabi (14) and Abdul Samad (19) in the final overs, but those knocks were not enough to spoil Kolkata's day. 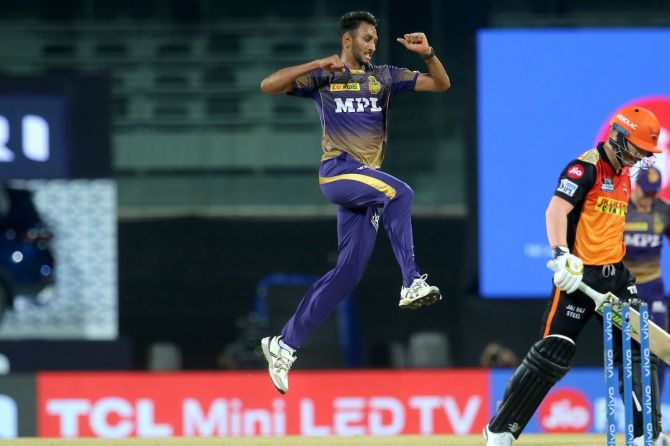 Prasidh Krishna, with figures of 2 for 35, including the key wicket of David Warner in the second over, was KKR's most impressive bowler.

Earlier, Rana top-scored with a 56-ball 80 while Tripathi hit a 29-ball 53, before Dinesh Karthik chipped in with a 9-ball 22 not out in the death overs to hoist the Knight Riders.

Sunrisers staged a late comeback, with Rashid Khan leading the way with figures of 2 for 24. Mohammad Nabi also took two wickets for 32 runs as Kolkata gathered only 42 runs in the last five overs. 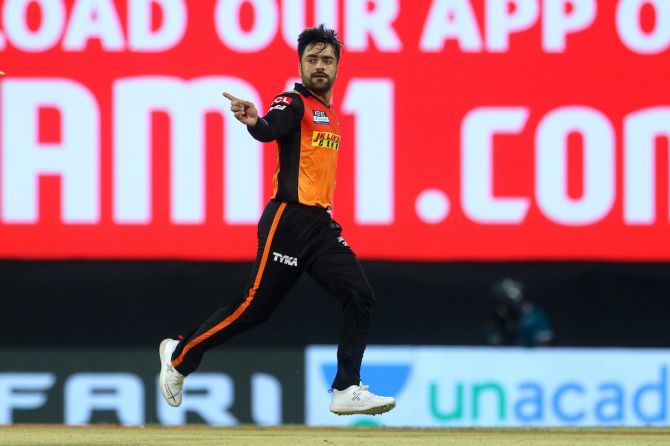 Left-handed opener Rana struck the ball hard and clean to provide his side a confident start after they were asked to take first strike.

Kolkata Knight Riders opened with a left-right combination in Rana and Shubman Gill and the decision worked. The duo attacked from the start and kept the scoreboard ticking as the first six overs yielded 50 runs. Rana contributed 36 off those runs from 25 balls, while Gill 14 off 11. 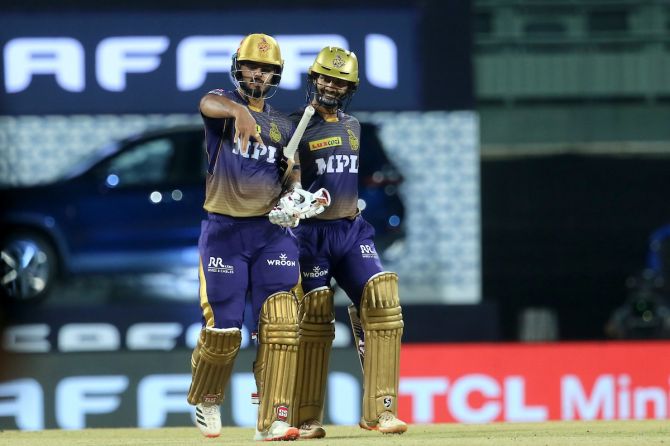 IMAGE: Nitish Rana celebrates after getting to 50 as Rahul Tripathi applauds. Photograph: BCCI

However, the introduction of Rashid Khan after the powerplay overs got Sunrisers Hyderabad the breakthrough. The Afghanistan spinner bowled a googly and Gill tried to slog-sweep but missed it and was bowled out for 15. KKR were 53 for 1 after seven overs.

Rashid almost had another wicket after rapping Rana on the pads. The umpire raised the finger following his big shout for LBW. However, he took the review and won it. 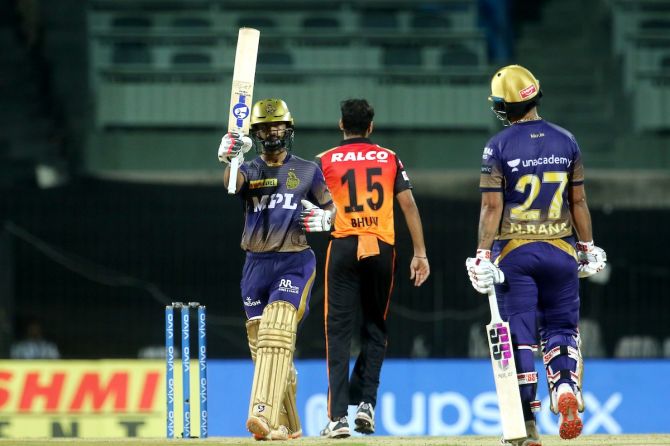 The leg before scare hardly mattered as Rana continued to fire and brought up his 50 with a brutal six off Vijay Shankar.

Tripathi soon joined in the run-riot with Rana and brought up his 50.

He also stroked confidently and fluently, smashing a massive six off Bhuvneshwar and then followed it up with a cheeky four in the third-man region. 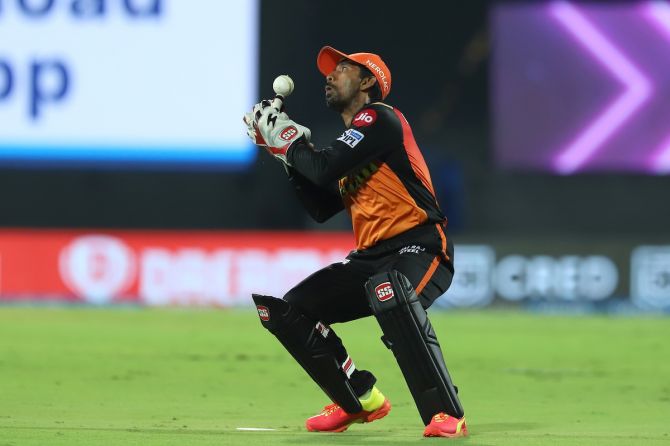 He completed his fifty with another boundary off Bhuvneshwar but was dismissed by T Natarajan soon after when he top-edged the ball.

Rashid sent back the dangerous Andre Russell (5) while Mohammed Nabi got rid of Rana and Eoin Morgan (2) off successive balls in the 18th over. 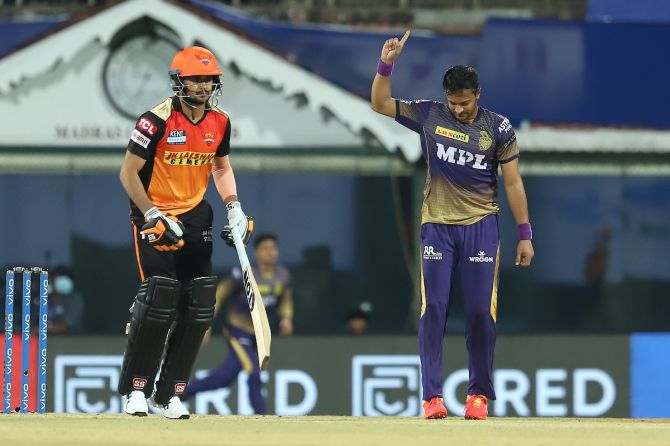 They could manage 177 for five in the end. 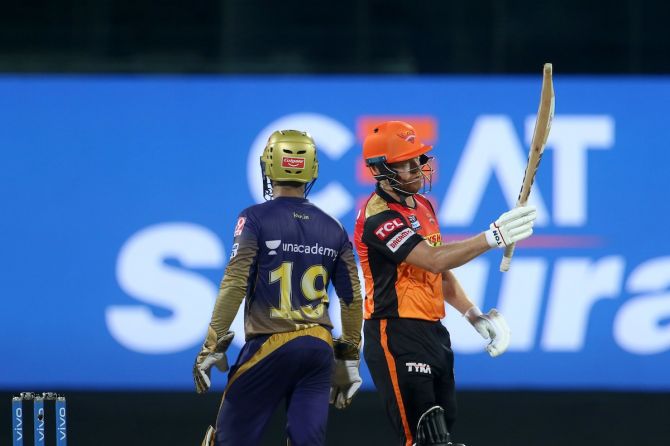 Warner was dropped on naught by Pat Cummins in the first over, bowled by Harbhajan Singh, but he could not make the best of the 'life' and became pacer Prasidh Krishna's victim, while Saha was cleaned up by Shakib-Al Hasan.

Bairstow and Pandey then formed a partnership at a steady run-rate and looked well-set to challenge the imposing total. However, Australia pacer Pat Cummins ended their 92-run stand when he had Bairstow caught at backward point by Rana. 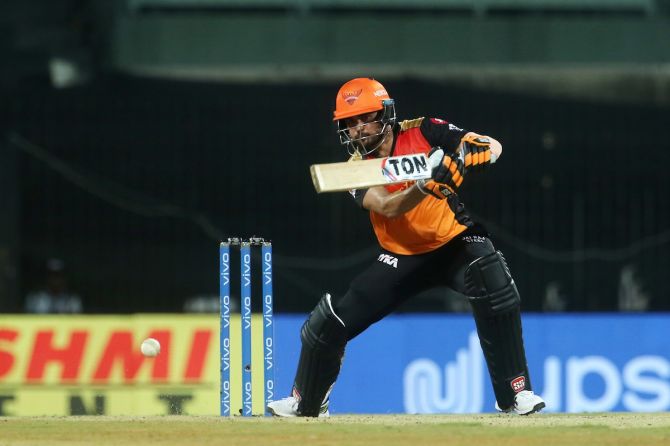 The Sunrisers needed 70 off the last five overs.

Mohammed Nabi (14) was hit on his neck by Krishna, but the Afghan responded with a cracking six. However, in his bid to chase down the target he went after a slower one and was caught by Eoin Morgan.

The 19-year-old Abdul Samad, who hails from Jammu and Kashmir, creamed off two sixes and a four off Cummins in the penultimate over to keep Sunrisers in the hunt.

They required 22 runs from the last over, but KKR's Andre Russell held his nerve to see his side home. 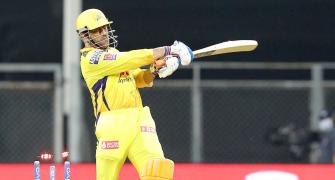 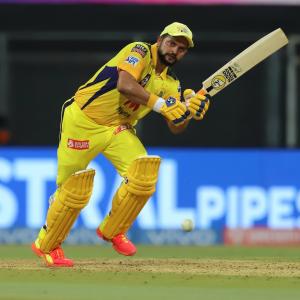 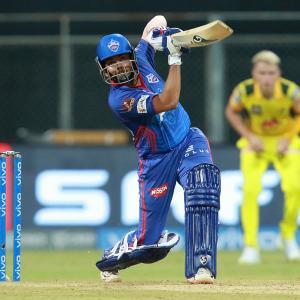