Mumbai Indians inched closer to earning a play-off berth as they rode on a disciplined bowling performance to eke out a five-wicket win over Pune Warriors in a Pepsi Indian Premier League (IPL) match on Saturday. 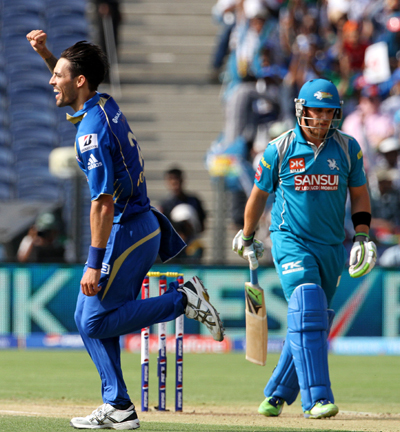 Mitchell Johnson led the way with an economical figures of 2-8 off his four overs before skipper Rohit Sharma's patient knock of 37 off 41 balls guided Mumbai to a win with seven balls to spare at the Sahara Subrata Roy International Stadium.

Speedsters Lasith Malinga and Abu Nechim Ahmed, too, came up with impressive performances, picking up two wickets each. Off-spinner Harbhajan Singh also impressed with a spell of one for 14, which included the wicket of Yuvraj Singh, who was the lone bright spot for the Warriors with a 29-ball 33.

Chasing a modest total, Mumbai were off to a disastrous start, losing opener Dwayne Smith in the innings' first delivery, the batsman's off-stump knocked over by Ashok Dinda.

Sachin Tendulkar helped himself to a few boundaries before Ajantha Mendis had the veteran batsman caught at long-on by Manish Pandey. It was the carrom ball and Tendulkar tried play it over the bowler's head.

And when Dinesh Karthik slog-swept a Yuvraj delivery straight to the waiting hands of long-off fielder Pandey, it seemed Mumbai were intent on making a heavy weather of the chase.

Ambati Rayudu smashed a few quick runs with the help of two fours and a six, but he failed to see the visitors through as Dinda had him caught at deep square-leg. Sharma, however, was composed at the other end.

With Mumbai needing 13 off the last three overs, their latest million-dollar signing, Glenn Maxwell, playing in his first match, hit Dinda for a four and six to make the scores level. Sharma, after doing all the hard work, got out to Kane Richardson before Harbhajan lofted the bower over extra cover to complete the chase.

Earlier, Johnson was the standout performer with the ball for Mumbai. Electing to bat, Pune Warriors were off to a poor start as both their openers, Robin Uthappa and skipper Aaron Finch, departed in quick succession.

Johnson once again struck early as he dismissed Finch for 10 when the Australian ended up hitting a short of length delivery straight to short cover, where Dwayne Smith completed an easy catch.

Malinga then trapped Uthappa leg before for 11, with the Pune scorecard reading 25 for two inside five overs. Yuvraj and Manish Pandey shared a 59-run stand for the third wicket to revive Warriors' sagging morale before departing.

Yuvraj, who was recently dropped from the Champions Trophy squad owing to indifferent form, finally found some touch as he laced his innings with one four and two sixes.

He found an able ally in Manish Pandey, who came up with an useful run-a-ball 29. Pune, who were cruising along at 84 for two, suddenly slumped to 85 for five as Mumbai bowlers pegged them back with three quick strikes.

Pandey was the first to go as he was caught at deep square leg by Ambati Rayudu off M alinga. Angelo Mathews (0) could call himself unfortunate as he took off for a non-existent single and Sachin Tendulkar's direct hit found the batsman a couple of inches short of his crease at the non-striker's end.

Harbhajan then landed Pune a body blow when he had the dangerous looking Yuvraj trapped in front - he had failed to judge the line of the ball.

Warriors never recovered from there and lost three more wickets in the form of Abhishek Nayar (11), Kane Richardson (8) and Bhuvneshwar Kumar (2) to cap off a pathetic batting display. 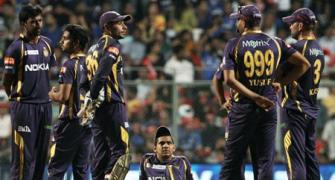 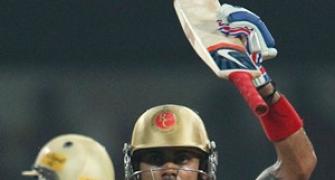 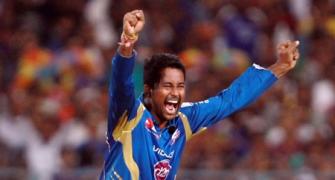 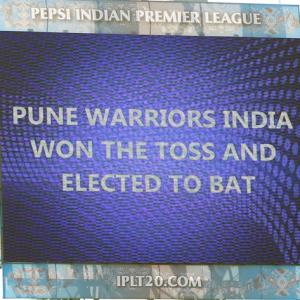 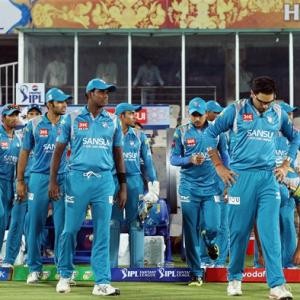