Mumbai Indians finally annexed their maiden Pepsi Indian Premier Legue title upstaging a jittery Chennai Super Kings by 23 runs in the final in Kolkata on Sunday to bring the curtains down on a tarnished sixth season of the cash-rich T20 league.

Mired in spot-fixing controversy after the arrest of owner N Srinivasan's son-in-law Gurunath Meiyappan, Chennai Super Kings found the 149-run target, usually an easy ask by their standard, a little too much as they finished on 125 for nine on a difficult track.

Kieron Pollard was named the man-of-the-match for his superb all-round effort.

Skipper Mahendra Singh Dhoni has now lost back-to-back IPL finals despite being the lone man standing in the end with an unbeaten 63. 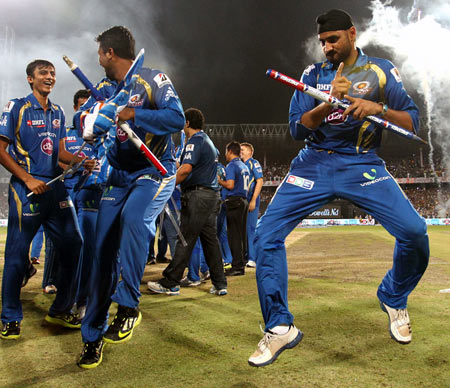 As soon as the last delivery was bowled by Pollard, senior pros Sachin Tendulkar, Ricky Ponting along with Team Mentor Anil Kumble rushed to the ground. Just like 2011 World Cup final, Tendulkar did a lap of honour with the teammates like Harbhajan carrying him on their shoulders.

Lasith Malinga (2/22) and Mitchell Johnson (2/19) set the tone before Harbhajan Singh (2/14) joined in the act as it was a rare batting disaster for the IPL heavyweights who featured in four straight, five overall, finals.

Four of their batsmen including Suresh Raina and Ravindra Jadeja got out for noughts while tournament top-scorer Michael Hussey (1) was dismissed first-up by a perfect Lasith Malinga toe-crusher to set the tone.

With the team reeling at 57 for seven after 11th over, there was no chance for the Chennai to make a comeback although Dhoni did try his best.

Down with a wrist injury, Tendulkar however celebrated every moment of their triumph as the trophy was like a farewell gift for the 40-year-old, who announced his retirement from the IPL.

"Had to wait for 6 years but this win is special since it is my last IPL," Tendulkar said after the victory.

Earlier, Pollard stood tall among the ruins with an unbeaten half-century to help Mumbai Indians post a competitive 148 for nine as they recovered from a horror start.

Pollard hit two huge sixes from the last two deliveries of the innings to end the proceedings in grand style as he smashed a 32-ball 60 not out studded with seven fours and three over-boundaries to push MI's total close to 150.

It was a good toss to lose for Mahendra Singh Dhoni as his seamers duo of Mohit Sharma (1/26) and Albie Morkel (2/12) giving them a dream start rocking Mumbai Indians for 16/3 in the fourth over.

Later, it was Dwyane Bravo who earned the Purple Cap in style with his four-wicket blitz that rattled the Mumbai Indians batting.

The two-time defending champions played to their reputation as the Dhoni's men played without being affected by the controversy and the script just went their way at a jam-packed Eden Gardens.

The embattled Super Kings could not have asked for a better start with pacer Mohit dismissing Dwayne Smith (4) in the first over.

The dangerman Smith was trapped right in front when an in-cutter had him plumb in the fourth ball. The young Mohit almost had another in the same over when Dinesh Karthik had an outside edge, this time off an away swinger, but it was a little wide of Ravichandran Ashwin, the lone slip fielder.

Aditya Tare's (0) stint lasted for one ball ball with Morkel rattling the youngster's leg-stump in the first ball, and came back in the next over to dismiss Rohit Sharma (2) caught and bowled.

The young Mohit justified the faith on him as he kept things tight from one end running through his full quota with impressive figures of 1/26 but it was an otherwise silent Morkel who roared back to form.

He ripped apart the top order in a fine first spell (3-0-12-2) that ensured that Mumbai Indians were under pressure going less than six runs an over at midway stage.

Such was the run crisis for Mumbai Indians that only eight boundaries were scored inside first 10 overs, while sixer remained a distant dream.

From Mumbai's perspective, Rayudu did not do anything silly as he along with Pollard stitched an important 48-run fifth wicket partnership that came off 34 balls.

Bravo went on to concede 17 runs in the 18th over with Harbhajan Singh's eight-ball 14 hitting some useful runs at the end along with Pollard. 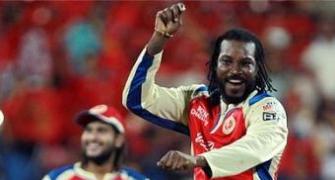 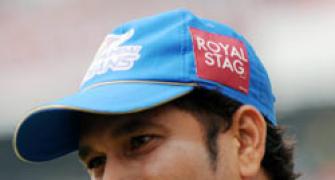 This is my last IPL, announces Tendulkar 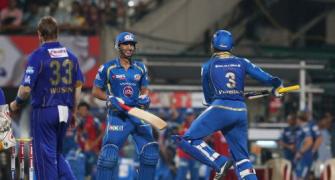 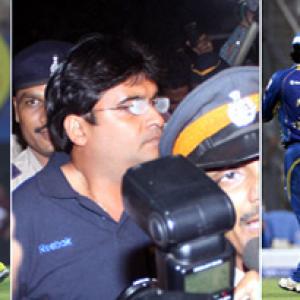