IPL: Mumbai edge past Rajasthan, to play Chennai in final

Mumbai Indians huffed and puffed their way to a four-wicket win over Rajasthan Royals in a thrilling match here tonight to set up a summit showdown with Chennai Super Kings in the Pepsi Indian Premier League.

Chasing a stiff target of 166, Mumbai had a flying start with opener Dwayne Smith (62) once again coming good up front, before Rajasthan Royals bounced back with Kevon Cooper (2-33) striking in the middle. 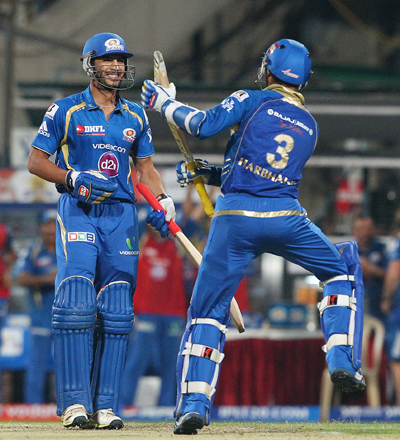 Mumbai Indians almost choked in the middle yet again but some sensible batting by young Rishi Dhawan and Harbhajan Singh helped them pip Rajasthan.

It will thus be a repeat of the 2010 final which Mumbai lost.

There was a little twist in the tale when Royals took three wickets -- Karthik (22), Rohit Sharma (2) and the prized-scalp of Smith -- in successive overs to leave them at 132 for four in 16.3 overs.

But Pollard calmed the nerves with a first-ball six taking them closer to the target.

There was more drama in store when James Faulkner dismissed Pollard in the next over with 25 runs needed from 15 balls and with five wickets in hand.

With 23 needed from the last two overs, Rayudu hit Cooper for a six before being dropped by Brad Hodge, which proved to be the turning point of the game.

Rayudu hit a boundary in the next ball to make it an eight-run issue in the last over, which was again full of drama when Watson bowled the batsman with his second ball.

With six needed from four, young Rishi Dhawan, who was included in place of Munaf Patel, showed amazing calm in pressure situation as he walked across the crease before hitting a boundary with a scoop shot that almost settled the issue for Mumbai.

A target of 166 might look stiff from the Eden Gardens' context but Mumbai Indians approached it in a quiet yet effective manner with Tare and Smith giving them a flying start.

Earlier, Rajasthan Royals rode on a gritty 43 by Rahul Dravid before Dishant Yagnik upped the ante with an unbeaten 17-ball 31 to post a fighting 165 for six.

Dravid was Royals' top-scorer as they seemed to struggle in the middle before Yagnik, who hit five fours, and Hodge (19 not out) added 57 runs in 27 balls to prop up their side. They were also helped by some shoddy bowling by Malinga in the last over.

Harbhajan Singh made full use of the overcast conditions returning with figures of 3/23, including the prized scalp of Dravid, before Kieron Pollard took two in one over to further damage Royals' scoring rate after they opted to bat first. Mumbai Indians got their script wrong in a horrible last over by Malinga who conceded 18 runs including seven extras.

An interesting duel was on display with a different-looking Dravid taking the attack on Mumbai Indians quickie Johnson, hitting the Aussie for consecutive boundaries with some classical flicks and drives. That Johnson had troubled Ajinkya Rahane with his rising bouncer hitting the young opener's helmet a while ago, must have surely made the Aussie frustrated.

Finding him at the receiving end, Johnson, who conceded 23 runs from his three-over first spell, was seen losing his cool with some mild exchanges in the middle.

But the retired Indian batsman went about his way silently as his aggressive demeanour brought the otherwise downcast atmosphere alive. The spinners got some help from the slow track that was aided by the overcast condition.

Ojha, who was introduced in the third over, troubled Dravid, conceding just three runs from his first over. But the veteran was quick to adjust himself in the next over as he took the aerial route that was enough to clear the 30-yard circle.

Dravid was a perfect blend of classic and contemporary -- he even fell off in the crease while trying to clear the ball and his intent was a perfect sight for his fans. But the problem for Royals was that Dravid did not get any support at the other end after Harbhajan took Rahane (21) and Watson (6) in successive overs.

Just when the opening partnership was looking good, Rahane was castled behind his legs, while Watson had a sloppy dismissal.

Malinga gave Mumbai Indians the third breakthrough --  Sanju Samson (0) -- while Harbhajan completed his quota with the prized scalp of Dravid with a soft catch at midwicket. The frustration was writ large on the veteran's face.

With Mumbai getting regular wickets, they did not let the Royals go off the hook as Dravid's team struggled to put on a partnership in the middle.

There was just one six in the Royals innings, and that too came as late as the 12th over, when Stuart Binny hit one against Ojha.

Earlier, evening showers delayed the start by an hour even as there was no reduction to the stipulated 20 overs. 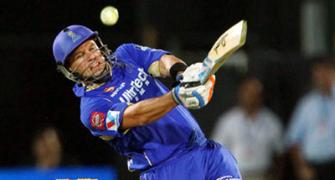 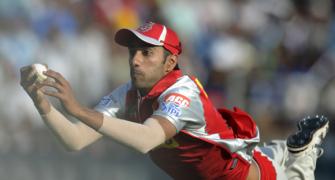 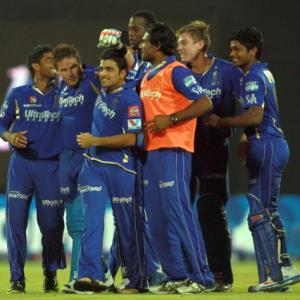 It's David vs Goliath as Rajasthan take on Mumbai's might