Miller played a scintillating 41-ball 80 knock laced with five fours and an equal number of sixes while Mandeep hit 58-ball 77, decorated with seven fours, to help their team secure victory with just one ball to spare.

Needing 29 off last two overs, Miller hit two consecutive fours off Ashok Dinda in the 19th over to ease down the pressure. Kings XI managed to get 13 runs off the over.

With 16 required off the last over, Miller hit two huge sixes off Luke Wright to hand the hosts their third win from six matches.

Earlier, Pune rode on skipper Aaron Finch's strokeful half-century and significant contributions from Yuvraj Singh and Wright to post an imposing 185 for four. 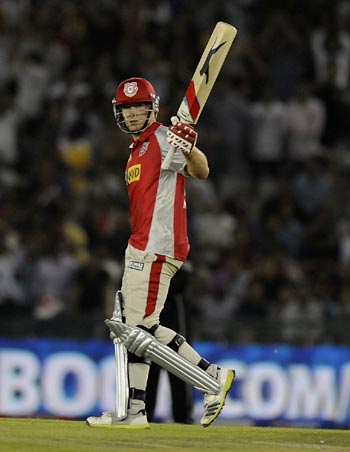 Finch scored an attractive 42-ball 65 with the help of eight fours and two sixes while Yuvraj hit an impressive 24-ball 34, laced with two fours and three sixes. Wright helped the visitors finish with flourish, courtesy his breezy 34 off 10, during which he found the fence six times.

In fact, 17th over from Azhar Mahmood yielded 17 runs as Wright hit him for four consecutive boundaries.

Opener Robin Uthappa also scored a useful 37 off 33 deliveries with the help of four fours and added 83 runs for the opening wicket stand with Finch.

Chasing the target, Kings XI got off to a disastrous start as they were two down with just five runs on board.

While Bhuvneshwar Kumar dismissed Gilchrist in the first over, Ajantha Mendis struck in the second over to send back Azhar Mahmood putting Punjab on back foot.

Gilchrist scored just a boundary before getting caught behind by Robin Uthappa. Mahmood failed to get off the mark and was trapped leg before.

Mandeep and Manan Vohra then joined hands in the middle and started the repair job in pursuit of a challenging target.

Both scored at brisk rate as they took Punjab past 50 in the sixth over.

However, Yuvraj struck in the seventh over to end the 53-run stand for the third wicket between the two. Vohra was castled by Yuvraj while going for the sweep for 22 to put Punjab in more trouble.

Miller walked out in the middle and destroyed the confidence of the Pune bowlers with a flurry of fours and sixes to put his side back in contention.

Miller launched a sensational counter-attack in the company of Mandeep and cut, drove and pulled to keep the mounting run-rate under check.

He first smacked Yuvraj for beyond the long on boundary and then came down hard on Sri Lanka's mystery opener Ajantha Mendis, hitting him for one four and a six.

In the process, Mandeep reached his half-century with a four off Rahul Sharma in the 14th over to bring about the first 50-plus score for a Kings XI Punjab player in this edition of the IPL.

Soon after, Miller also reached his double-digit figure after hitting Wright for a huge six over deep extra cover.

This was Miller's first-ever 50 in the IPL which came off just 29 deliveries.

Both added an unconquered 128 runs in just 79 deliveries for the fourth wicket partnership to script an impressive victory for the Punjab team.

Earlier, Finch led from the front after being dropped by Gilchrist off Mahmood in the second over of the innings.

Both Finch and Uthappa gave the visitors a flying start as they took the side to 77 in first ten overs. Punjab’s bowlers appeared clueless as the duo helped Pune cross 50-mark in just six overs.

Parvinder Awana gave Punjab their first breakthrough by dismissing Uthappa, who was caught by Gilchrist behind the wickets in the 11th over.

Next man-in, Yuvraj made his intentions clear from the outset as he smashed leg-spinner Piyush Chawla for a six and a four in the 14th over.

Finch raced away to his 50 in just 33 deliveries and was looking good for a big total just when pacer Manpreet Gony got rid of him. He was caught by Manan Vohra at sweeper cover.

Yuvraj was unperturbed by the dismissal and went about his business in style hitting two sixes off Awana before being caught at extra cover by Gurkeerat Singh off Mahmood.

Wright, who walked in after the dismissal of Yuvraj, was in ominous form as he clobbered Mahmood for four successive fours.

He came down hard on an otherwise economical Praveen Kumar in the next over and smashed him for two fours and six to accumulate 20 runs off his over.

He was dismissed in the last over of the innings, caught by David Hussey at long on off Mahmood. 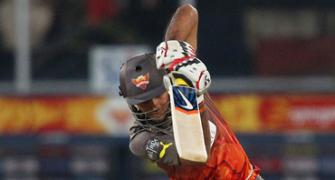 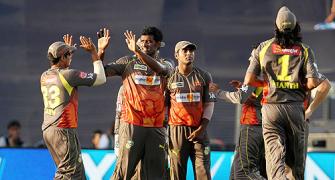 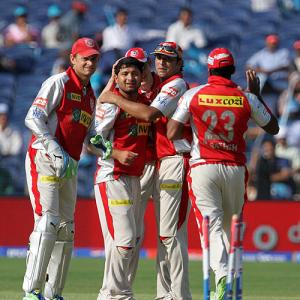