IMAGE: Royal Challengers Bangalore's Pawan Negi celebrates with teammates after picking the wicket of Delhi Daredevils' Shahbaz Nadeem in the final over during their Indian Premier League match in Bengaluru on Saturday. Photograph: BCCI

Royal Challengers Bangalore got back to winning ways after they squeezed past Delhi Daredevils by 15 runs on a batsman-friendly wicket in their Indian Premier League match at the Chinnaswamy Stadium in Bengaluru on Saturday.

Chasing 158 for a win, Delhi ended at 142 for 9 and young Rishabh Pant's 57 off 36 balls went in vain. For Delhi, Pant was the only standout batsman -- his half-century included 3 fours and 4 sixes.

Delhi lost wickets at regular intervals in the light of some tight bowling from RCB and none of their specialist batsmen stayed to give Pant company at the crease. The shot selection of most of the Delhi batsmen left a lot to be desired.

Having lost crucial wickets at regular intervals, Delhi were in the hunt till the closing stages of the match as they needed 37 from the final four overs and 21 from the final two but Amit Mishra consumed a lot of deliveries without adding much to the scoreboard.

That added pressure to Pant who was out in the final over. Left-arm spinner Pawan Negi proved to be the late match-winner picking two wickets in the last over, the crucial one being that of Rishabh Pant, having him bowled around his legs. With 19 needed off the last over and a set Pant at the crease, it looked like Delhi would squeeze past the total.

However, RCB captain Shane Watson's gamble to bring Negi into the attack in the last over paid off big time.

Negi had Pant bowled off the very first ball of the last over and two balls later had Shahbaz Nadeem caught and bowled. He bowled accurately to give away just three runs in that last over and ensure RCB went over the line. IMAGE: Kedar Jadhav put on a rescue effort to help Royal Challengers Bangalore set a total of 157 for 8. Photograph: BCCI

Earlier, Kedar Jadhav played a lone hand with a brilliant 69 off just 37 balls as Royal Challengers Bangalore scored 157 for 8 against a clinical Delhi Daredevils bowling attack in their IPL match.

Opting to bat first after winning the toss, RCB began scoring at a brisk pace but lost two quick wickets early on, putting the brakes on their scoring rate.

Jadhav then produced an excellent innings as he shifted gears from being watchful to hitting a flurry of big shots.

But once Delhi captain Zaheer Khan ended Jadhav's innings in the 17th over, RCB could add just 15 runs off the remaining three overs with Chris Morris picking up two more wickets to restrict RCB to a modest total. Jadhav hit five fours and as many sixes in his 37-ball knock. None of the other RCB batsmen could contribute much with captain Shane Watson's 24 being the next highest.

Watson's choice to bat backfired as RCB lost two quick wickets early on with Chris Gayle and Mandeep Singh getting out cheaply as the home side were reduced to 41 for 2 in the sixth over.

West Indian Gayle, who needed 31 runs to become the first player to score 10,000 runs in T20 cricket before this match, was dismissed by Morris for just six.

Number 3 batsman Mandeep (12) did not last long, facing just 10 balls before he fell to Pat Cummins. The two early wickets slowed down the pace of scoring but RCB's woes were compounded after captain Shane Watson was out stumped off the bowling of Shahbaz Nadeem.

Watson (24 off 24 balls), who batted cautiously after the two early wickets, was done in by the extra bounce and a bit of turn and was completely beaten.

Rishabh Pant collected the ball outside off and did the rest.

RCB were 61 for 3 at the halfway stage but Jadhav decided to score some quick runs as he hit Amit Mishra for two fours and as many sixes to take 24 runs from the 13th over.

Jadhav continued with a four and six off Carlos Brathwaite to add another 16 in the next over as RCB scored 48 runs in three overs. 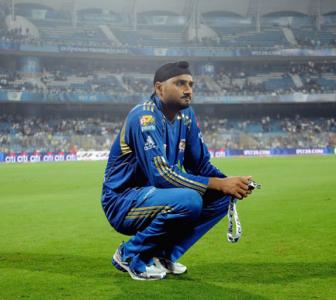 IPL: 'Leaving out Harbhajan was a tactical move' 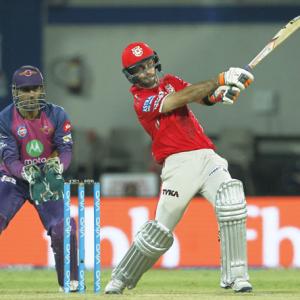 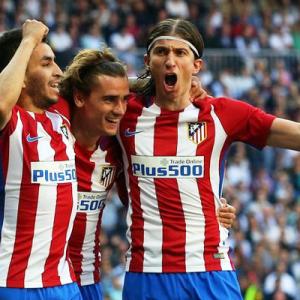