Maintaining that their son is innocent, the parents of Shantakumaran Sreesanth, who is under arrest in the IPL spot-fixing scandal, on Wednesday declined to comment on the Delhi police invoking the stringent MCOCA provisions on their son.

"Sreesanth is innocent and we need the support of everyone," they told reporters in Kochi.

Asked about the invoking of MCOCA on the tainted India pacer, they said they do not have anything to say on that.

The Maharashtra Control of Organised Crime Act (MCOCA) had been imposed by Delhi police on Sreesanth, Ajit Chandila, Ankeet Chavan and 23 others who have been arrested in the IPL spot-fixing scandal. 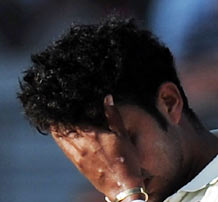 Sreesanth and Chandila are lodged in Tihar jail in Delhi while Chavan has been granted interim bail for his marriage.

Sreesanth on Tuesday moved fresh bail application before a Delhi court after the police invoked stringent MCOCA against him and others in the IPL spot-fixing scandal.

Additional Sessions Judge Sanjiv Jain issued notice to the police seeking its reply on the application and fixed the same for hearing on June 7.