News
Business
Movies
Sports
Cricket
Get Ahead
Money Tips
Shopping
Sign in  |  Create a Rediffmail account
Rediff.com  » Cricket » 'We will try to give everybody a game in the upcoming Asia Cup' 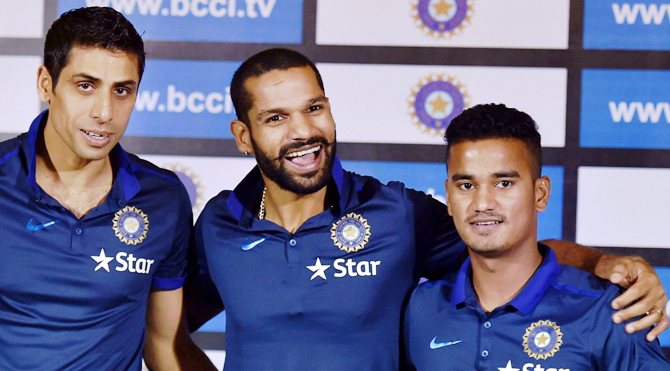 IMAGE: Shikhar Dhawan, Ashish Nehra and Pawan Negi interact with the media before leaving for Dhaka to participate in the Asia Cup. Photograph: PTI

Indian limited overs captain Mahendra Singh Dhoni has indicated that the team would look to give everyone a chance in the upcoming Asia Cup so as to get their balance right ahead of the World T20.

"We will try to give everybody a game. It's something that is as important as to play as a settled team," said the captain. "It's important to give everyone a game under their belt but we will look to win the games and that's our top priority.

"I feel the conditions will allow us to give others opportunity. From the team's perspective, it's important to make sure you keep repeating your performances and do well for the team and enjoy the team," he added.

Speaking about preparations, Dhoni further said, "Often you don't get too many games before the World T20 so it's good to have some games to get into the groove."

"I've the belief and talent required to win a big tournament. This team has all the ingredients. It's important to keep everyone fit. If everybody gets a chance to play it will be very good for us.

India launch their Asia Cup campaign against Bangladesh on February 24.