India's captain is the seventh wicketkeeper to complete 251 catches in 90 Tests.

Statistical highlights of the opening day's play in the third India-Australia Test in Melbourne. 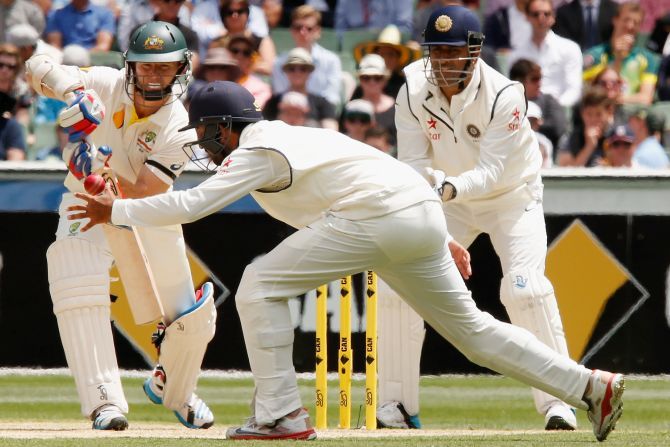 Australia opener Chris Rogers bats on Day 1 of the third Test against India at the MCG. Photograph: Darrian Traynor/Getty Images

David Warner posted his first duck in nine Tests in 2014. His second duck versus India is his third in Tests.

# Despite his duck, he averages 64.47 in Tests this year, his tally being 1096, including six hundreds and three fifties, in nine Tests.

# Chris Rogers registered his eighth fifty in Tests – his third vs India. He has posted three consecutive fifties against India for the first time in Tests - 55 and 55 at Brisbane and 57 at Melbourne.

# He enjoys an outstanding record in three innings in Tests at Melbourne - 61 & 116 vs England in December last year and 57 vs India. He averages 78.00 while amassing 234 runs at the MCG. # With 251 in 90 Tests, he became the seventh wicketkeeper to complete 250 catches in Tests.

# Shane Watson (52 off 89 balls) scored his first fifty in nine innings - his last half-century being 83 not out off 90 balls vs England at Melbourne in December 2013.

# His fourth half-century vs India is his 23rd in Tests. In the course of the said innings, he completed 500 runs at an average of 83.33 in five Tests at Melbourne. His tally includes a century and five fifties.

# Ravichandran Ashwin bowled 27 overs - the second-most bowled by a spinner on the first day of a Test match at Melbourne Cricket Ground since 2009. Saeed Ajmal had bowled 32 for Pakistan at the end of the first day vs Australia at the MCG in December 2009.