Indian bowlers, led by spin duo of Iqbal Abdulla and Bhargav Bhatt, put up a dominating performance as they closed in on a victory after forcing New Zealand to follow-on on second day of three-day match in Emerging Players Tournament in Tounsville.

The Indian side had reduced the Kiwis to 24 for two in their first innings on day one after rattling up 404 for six declared and then they bundled out their opponents for 272.

India further tightened their gripped over the match as they took three more wickets for 48 runs after asking Kiwis to bat again.

Abdulla (3/78) and Bhatt (3/39) took three wickets each as they broke the back of the Kiwi middle order.

Dean Brownlie was top scorer for the Kiwis with a 55-run knock while skipper Daniel Flynn (52) and Luke Woodcock (48) also resisted the Indian attack.

When the Kiwis began their second essay, India yet again made an impressive start, getting both the openers -- Rob Nicol and Brad Wilson -- out for ducks.

Vinay Kumar struck in the fifth ball of the innings to get rid of Nicol while Jaydev Unadkat removed Wilson in his first ball.

Flynn (24) and Brownlie (9) were at the crease for New Zealand when stumps were drawn for the day. 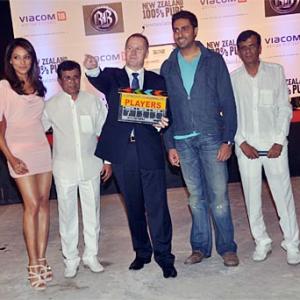 Kiwi PM bowled over by Bollywood