Newly appointed Pakistan Cricket Board chairman Shahryar Khan wants cricketing "powerhouse" India to encourage "democracy" in the functioning of the ICC after being forced to let BCCI have the control of the governing body along with England and Australia.

PCB was the last of the ICC members to give it consent to the ICC revamp after it was decided that the cricket-starved nation will be able to play against the full members in a bilateral series including one against arch-rivals India. 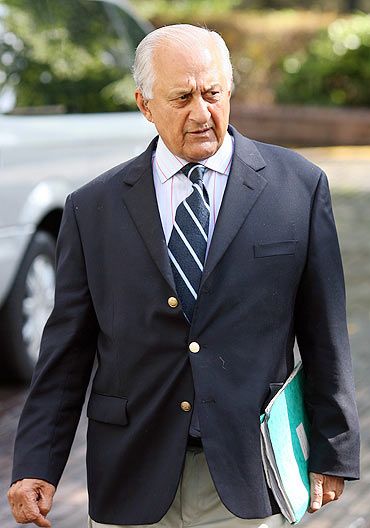 "Well, we have already agreed on playing each other (India and Pakistan) regularly from next year. We were the last ones to accept the ICC revamp formula and that is how it is. India deserves to have a special status in the current scenario and I hope they look after the interest of Pakistan cricket," Shahryar told PTI over the phone in an interview.

Asked how he sees the "big three" controlling the game, the 80-year-old career diplomat said: "All members should have equal rights in the ICC. There has to be a democratic set-up. India's clout in international cricket is justified but I hope they do all what is required to promote democracy in the system."

The man, who played a vital role in turning India's historic tour of Pakistan in 2004 into a reality, wishes that PCB could host its neighbour in his tenure.

"Most in the cricketing world believe India-Pakistan series is even bigger than the Ashes and therefore it should happen frequently. Unfortunately, the security issue remains a problem in Pakistan and as of now, we can only think of hosting them at a neutral venue like UAE," said the Bhopal-born Pakistani referring to the first of the eight bilateral series scheduled to take place in December 2015.

The two cricket crazy countries last played each other in a bilateral Test series in 2007-08 in India.

He also hopes the BCCI will allow Pakistan players in the next edition of the Indian Premier League. The cricketers from across the border have been unable to take part in the IPL barring the first edition in 2008. Only Azhar Mahmood, courtesy his British passport has played in the sixth edition of IPL for the Kings XI Punjab.

"I will be talking to the BCCI bosses about all issues concerning Indo-Pak cricket at the next ICC meeting in October. I am planning to visit India soon to carry on the discussion regarding these matters.

"The Pakistani players unfortunately could not play because of security reasons. I really want to see them play in the IPL next year."

Shahryar is back at the helm after eight years and his biggest challenge is to get the game in Pakistan out of doldrums. Earlier in the week, the proposed Pakistan Super T20 League was again shelved indefinitely.

"There has been no international cricket in Pakistan for a long time now. People only get to watch top-quality cricket on television. We thought if we go ahead with the league, it will be difficult to get the fans to the stadium. We need more time to prepare," he said

"As of now, my focus is on improving the grassroots and the domestic competition. I am also looking to get A teams as well as the U-19's from other countries to play in Pakistan. But there is always the security aspect," he said.

He concluded with his thoughts on next year's World Cup in Australia and New Zealand. "Pakistan are a team short on stars. You don't have the likes of Shoaib Akhtar anymore. I hope these boys do better than last time."

Pakistan had lost to eventual champions India in the semi-finals of the 2011 edition at Mohali.

Source: PTI© Copyright 2021 PTI. All rights reserved. Republication or redistribution of PTI content, including by framing or similar means, is expressly prohibited without the prior written consent.
Related News: ICC, Pakistan Cricket Board, IPL, India, Shahryar Khan
SHARE THIS STORYCOMMENT
Print this article