# Munaf Patel has been a consistent performer, claiming eight wickets (ave. 13.37) in three games in the current. This is his career-best bowling performance in an ODI series.

# Lonwabo Tsotsobe has bagged 9 wickets at 10.44 runs apiece in three games. He is the leading wicket-taker on either side in the series.

# Zaheer Khan's figures of three for 43 are his second best at Newlands, Cape Town in ODIs. His best bowlers figures are 3 for 42 against South Africa on November 26, 2006.

# Yusuf Pathan has got his second MOM award in ODIs - his first against South Africa. This is also his first award on foreign soil.

# Pathan's aforesaid fifty is first against South Africa - his third in ODIs.

# Pathan has registered two successive innings of fifty-plus in ODIs for the first time. In his previous innings, he had recorded a career-best 123 not out against New Zealand at Bangalore on December 7, 2010. 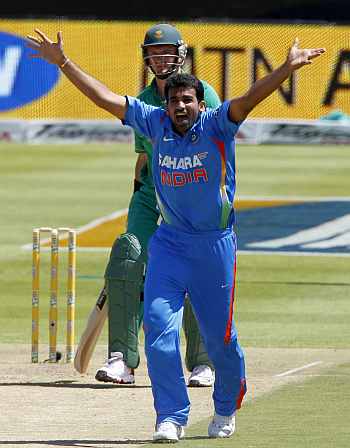 # Plessis and Duminy were involved in a fifth wicket stand of 110  - South Africa's highest against India for this wicket-position, eclipsing the 107 between Mark Boucher and Neil McKenzie at Dhaka on April 18, 2003.

# Morne Morkel (3/28) has registered his best bowling performance against India, outstripping the 2 for 12 at Durban on January 12, 2011.

# Plessis' splendid innings is the third best by a South African on his ODI debut. Colin Ingram had posted 124 against Zimbabwe at Bloemfontein on October 15, 2010 and Shaun Pollock 66 not out against England at Cape Town on January 9, 1996.

# Gulam Bodi is the only other South African to post a fifty-plus on debut - 51 against Zimbabwe at Bulawayo on August 22, 2007.

# Suresh Raina and Yusuf Pathan have added 75 -- India's highest for the sixth wicket against South Africa in South Africa, beating the 74 (unbroken) between Pravin Amre and Vijay Yadav at East London on December 19, 1992.

# With their magnificent victory, their first against South Africa at Newlands, Cape Town, India have taken a 2-1 series lead.

# India, for the first time, have recorded two ODI wins in a row against South Africa in South Africa -- by one run at Johannesburg on January 15 and by two wickets at Cape Town on January 18.

# India's two-wicket triumph is their narrowest margin in terms of wickets, surpassing the three-wicket win at Kolkata on November 10, 1991 and Kochi on March 9, 2000.

# Yusuf Pathan (1/27) has recorded his best bowling figures in South Africa, bettering the 1 for 56 against Pakistan at Centurion on September 26, 2009.

# Jean-Paul Duminy has posted his second fifty (52) against India - his eleventh in ODIs.

# With 138 runs at an average of 46.00, Jean-Paul Duminy is the top run-scorer in the present series. He is also the only player to register two fifties. 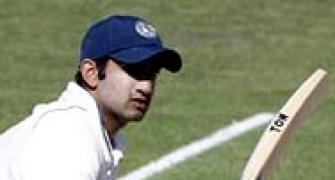