Bikash Mohapatra reports from Edgbaston, on the fourth day's play in the third Test between India and England.

The Indian dream is over; the humiliation complete.

England's comprehensive innings and 242-run win in the third Test at Edgbaston ensured the home team the series. Besides, it meant the hosts replaced their guests as the No 1 team in the ICC Test rankings.

Having won the opening two Tests, at Lord's and Trent Bridge respectively, England completed their dominance of the series with an authoritative bowling performance on the fourth day.

For India, the return to Edgbaston after a gap of 15 years was as humiliating as it was in 1996. The visitors lost for the fifth time in six Tests at the venue, where they was no dearth of support for them. It was only a convincing performance that they lacked.

Chasing 487 to make England bat again, the visitors crashed to 244 all out.

The result meant India had lost their first Test series in three years -- after a 2-1 reverse in Sri Lanka in 2008. 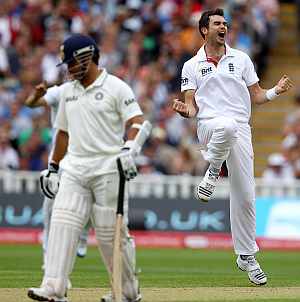 More importantly, it marked a complete annihilation of a team (that had promised a lot, delivered little) and shock that India's ever-supporting fans will take a long time to recover from.

It took 43.3 overs before England quelled the Indian resistance, rather the lack of it.

A disastrous morning session, where the visitors lost as many as five wickets, made an early finish inevitable.

MS Dhoni and Praveen Kumar delayed the same with some rearguard slogging, putting on 75 runs (off just 45 balls) for the eighth wicket to ensure the team didn't suffer its worst defeat ever -- the innings and 336 runs defeat against the West Indies in 1958 remains their worst. (Their worst defeat margin came at Lord's in 1974 when they lost by an innings and 285 runs after being bowled out for 42.)

India's captain, for a second time in the match, was aggression personified. He scored an unbeaten 74, his 79-ball innings inclusive of 13 hits to the fence.

It was his 23rd Test fifty, his sixth against England, following a fighting 77 in India's first innings. Only that it came too late in the day.

He suffered his first series defeat as captain of the Indian team, an embarassing one at that!

The overcast conditions on Saturday morning offered anything but hope for the hordes of Indian fans who turned up to watch the Test.

It was apparent that the same would be conducive for England's seamers and detrimental to Indian prospects.

Can our batsman save India this match? The question was asked by many, hoping for an impossible result.

Gautam Gambhir provided an early answer. The opener guided the first ball he faced in the day, off James Anderson, to Swann at second slip.

He was on 14 when he came out to bat, and that is what his final score was.

Seven balls later, Anderson dealt a second blow to Indian aspirations. A perfect outswinger forced Rahul Dravid (18) to play it and Matt Prior made no mistake behind the stumps. Dravid seemed uncertain whether he actually nicked it. However, he did not ask for a review.

Tendulkar, though, looked the most confident of all Indian batsmen. A couple of boundaries off his blade, off Anderson, helped the team surpass the 50-run mark.

However, Anderson returned to pick his fourth wicket of the innings, his third of the morning. Another outswinger took the edge of VVS Laxman's (2) bat and went straight to Prior's gloves.

India had lost three vital wickets in the first hour of play. Anderson, bowling from the Pavilion End, as opposed to the City End from which he bowled on Friday, had made a huge impact, his opening spell making for an impressive read (6-2-17-3).

In Swann's fourth over he hit a couple of boundaries before the bowler hit back with his last delivery, having the batsman out leg before.

The spinner gave his team the sixth wicket as well. As MS Dhoni hit a shot, the ball touched Swann's fingers on its way to the stumps. Tendulkar was found short at the non-striker's end.

An unfortunate manner to get out, but Tendulkar had to go. He scored a 60-ball 40, an innings that included eight boundaries.

Dhoni (nine not out) and Amit Mishra (16 not out) ensured there was no further damage before lunch, India going into the break at 116 for six (38 overs).

The third over after lunch witnessed the seventh Indian casualty.

Mishra (22) hit a Swann delivery straight to Broad at mid-on. India reduced to 130 for seven.

Praveen Kumar announced his intentions soon after his arrival to the crease, hitting the second ball he faced (off Swann) to the fence. In the spinner's subsequent over, he stepped on the pedal. The fourth ball was smashed over the bowler's head to the fence.

The fifth was smashed over long-on for maximum, a shot that saw India surpass the 150-run mark. The sixth was hit to the same area, yielding similar results. Kumar got 30 off the first dozen balls he had faced.

His assault inspired his captain. Dhoni hit Anderson for successive boundaries to bring up the 50-run partnership for the eight wicket.

There were a plethora of boundaries thereafter. However, it was nothing but a brief period of entertainment.

With Kumar being severe on Swann, Strauss replaced the spinner with Broad and the result was immediate.

Broad struck with his second ball, having Kumar caught by Ravi Bopara at mid-off. The 24-year-old's 18-ball knock was inclusive of five hits to the fence and three over it.

Dhoni completed his fifty soon after but Broad returned to have Ishant Sharma (0) leg before. The end came in quick time, Bresnan having Sreesanth (5) caught by Pietersen at gully.

India were bowled out with more than four sessions left to be played.