Bikash Mohapatra reports from Lord's on the second day's play in the first Test.

The home team declared their first innings on 474 for eight.

At stumps, India were 17 without loss in reply.

Pietersen's 202 not out was a significant innings in every sense. The 326-ball knock, inclusive of 21 hits to the fence and one over it, was his first double century against India, and third overall.

More importantly, the South Africa-born batsman was involved in a plethora of substantial partnerships that helped the English cause -- be it the 98-run third-wicket stand with Jonathan Trott (70), the 110-run fourth wicket stand with Ian Bell (45), the 120 runs for the sixth wicket with Matt Prior (74), or, for that matter, the quickfire 61 in partnership with Graeme Swann (24) for the eighth. 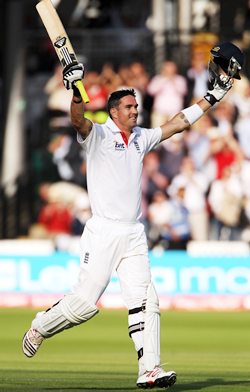 This is a historic Test -- the 2,000th and 100th between the nations involved -- and Pietersen ensured it will be a memorable one.

Praveen Kumar was the most successful bowler for India, picking all the three wickets to fall on the day and having figures of three for 106 at the end of the second session.

But, in the absence of the injured Zaheer Khan, the rest of the attack failed to pass muster.

Harbhajan Singh (none for 152) and Ishant Sharma (none for 128) were unable to rise to the occasion.

India won the toss and made early inroads on the opening day, but, subsequently, they lost out on their advantage.

With England having put up a sizeable first innings score, any hopes of India winning this Test is only wishful thinking.

MS Dhoni's men will go out to bat on Saturday in a bid to save the Test.

It was bright and sunny at Lord's on Friday, in sharp contrast to the inclement weather that spoiled almost half the day's play on the opening day.

However, news in the visitors' dressing room was anything but bright.

Zaheer Khan, who had limped off the field with a hamstring injury on Day 1, was ruled out of the first innings.

A statement from the Indian management, ahead of the start of the day's play, suggested Zaheer is undergoing treatment and would be available in the second innings.

In the absence of their spearhead, the Indian bowling attack looked considerably weakened.

Meanwhile, the umpires decided that 98.4 overs would played on the second day, and play would continue till 6.30 pm (local time) to make up for the lost time.

Jonathan Trott and Pietersen added 32 runs in under 12 overs before the former was the first to fall on the second day.

Praveen Kumar, back from the Pavilion End, provided India its first breakthrough, trapping the well-settled Trott plumb in front. The ball appeared to clip the leg stump and umpire Billy Bowden had no hesitation in raising his finger.

Trott scored a valuable 70 and was involved in an equally valuable 98-run stand for the third wicket with Pietersen, a stand that helped build the foundation of the England innings.

Kumar continued to trouble and seemingly had Pietersen caught by Rahul Dravid at leg slip, but the batsman was convinced the fielder had not taken a clean catch and did not leave the field.

Replays indicated that the ball had indeed touched the ground before Dravid collected it. KP survived.

Four balls later, he went on to complete a well-deserved half century with a single towards long leg.

Kumar, after an ordinary opening spell, was impressive in his second one (his figures reading 6-2-7-1).

Trust Dhoni to spring a surprise on more occasions than one.

India's captain did spring one immediately after lunch when he traded his gloves with Dravid and came in to bowl.

Dhoni conceded a single in his first over. However, off the third ball of his second, he appeared to have induced an edge off Pietersen's blade, Dravid making no mistake with the catch.

Umpire Bowden raised his finger and Dhoni and his teammates were palpably ecstatic. The batsman stood his ground, unconvinced.

The decision was reviewed and changed, hot spot clearly indicating there was no edge. Pietersen survived.

He bowled five overs for 20 runs before resuming with his keeping duties.

Ishant replaced his captain in the attack and started with the new ball, in the 88th over.

Pietersen continued to shine. A boundary of an over-pitched Ishant delivery helped him register his 18th Test ton, his fourth against India.

It was the 31-year-old's first hundred on home soil in almost three years -- his last Test hundred at home coming at The Oval against South Africa in 2008.

He celebrated the feat with another boundary, two balls later. 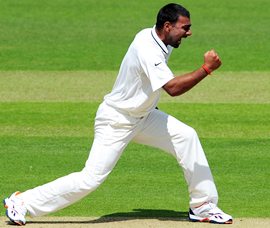 However, Praveen Kumar brought India right back into the match with a double strike in the next over.

Kumar had a well-settled Ian Bell (45) caught behind off the first ball. Three balls later he dismissed Eoin Morgan (0) in similar manner.

Bell's 76-ball knock comprised six hits to the fence; his fourth-wicket partnership with Pietersen yielded his side 110 runs.

Inspired by Kumar's success Dhoni brought himself back into the attack in the 98th over and bowled his first maiden over of the spell.

However, Pietersen and Prior negotiated the remaining overs well to put their side in a fairly comfortable position at the tea break.

Raina conceded nine runs and was replaced by Harbhajan after an over, the latter switching ends (to the Pavilion End).

Bhajji's first over was expensive as well, nine runs coming off it and the 50-run partnership for the sixth wicket also achieved during the over.

However, there was high drama in the offie's second over.

Pietersen's attempt to switch-hit didn't materialize and the bowler was convinced he's got his man. In fact, Bhajji jumped all over the pitch, demanding a positive response from the umpire.

Dhoni went ahead with his bowler's conviction and the decision was referred.

And Pietersen survived again, the replays clearly suggesting the ball had clipped the pads.

The English stepped up the scoring rate considerably in the final session, Prior reaching his 17th Test half century in the process.

Pietersen and Prior put together 120 runs for the sixth wicket before the latter was dismissed.

The England stumper's 93-ball innings was inclusive of seven boundaries. No points for guessing who got India the breakthrough.

It was Kumar again. Bowling what was his 40th over, he made twin strikes, first having Prior caught behind and then trapping Stuart Broad (0) leg before with the next ball. The last wicket endured him his first five-wicket haul in Test cricket.

The 31-year-old smashed the third ball of Kumar's next over to the deep midwicket fence to get past the 150-run mark.

It was his seventh 150-plus score. Pietersen celebrated the feat with a boundary over mid-off next ball.

England reached the 400-run mark in the same over.

KP and Graeme Swann (24) added 61 runs for the third wicket (in just nine overs) before the latter was cleaned up by Raina.

In Raina's next over though, Pietersen slammed 16 runs off four balls to reach his third Test double hundred.

England declared their innings immediately after.

Abhinav Mukund (8 not out) and Gautam Gambhir (7 not out) opened the batting for India and negotiated the six overs, the former surviving a few anxious moments. 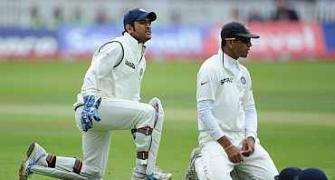 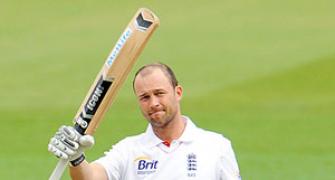 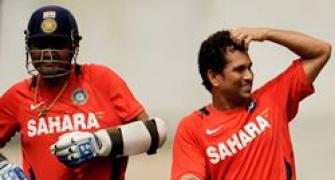 It's advantage India at Bangalore 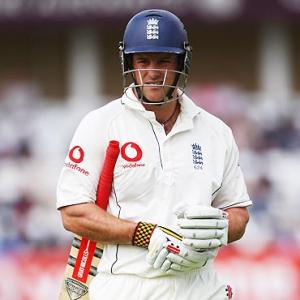