News
Business
Movies
Sports
Cricket
Get Ahead
Money Tips
Shopping
Sign in  |  Create a Rediffmail account
Rediff.com  » Cricket » The cricketer who announced the arrival of a New India

The cricketer who announced the arrival of a New India 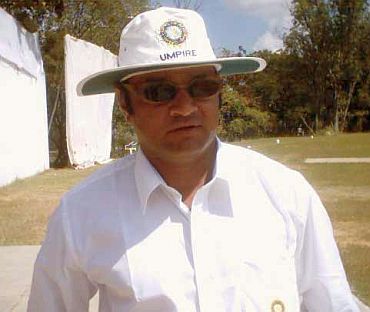 M P Anil Kumar recalls a momentous Indian victory and recounts the trials and tribulations of a forgotten star of that triumph.

The first cricket match that I watched live on television had featured arch-rivals India and Pakistan, on September 21, 1983. It also happened to be the first one played under lights in India. The arena was Jawaharlal Nehru Stadium, Delhi. Pakistan tallied 197 for 3, and then reduced India to a precarious 101 for 7.

Back to the wall, Kirti Azad and Madan Lal launched a rearguard counterattack to snatch victory by one wicket. En route, our spirits soared as high as the apogee of the three sixes a rampaging Kirti Azad blasted off Jalaluddin, who, only a September ago had claimed the first ODI hat-trick against Australia (Rodney Marsh, Bruce Yardley and Geoff Lawson).

Those days Doordarshan telecast the matches with two or three cameras, and the viewers could see action only from one end of the stadium. All that changed on March 3, 1985; Doordarshan beamed the World Championship of Cricket feed of Channel 9. The quality of the visuals and the telecast left us awestruck. It was like switching from an abacus to an electronic calculator!

What also left us awestruck was the undefeated run of the Sunil Gavaskar-led Indian team Down Under. Small wonder then that it was voted the best Indian one-day team of the last century.

Rajiv Gandhi had taken over as the prime minister and he raised hopes of building a New India. That March, a 22-year-old on the cricket field exemplified the spirit of New India. This stumper began life as a tail-end batsman, but grabbed every opportunity and went on to open the innings for the Syndicate Bank team and later the Karnataka state team. He contributed 92 and 77 in the 1982-83 final to help Karnataka win the Ranji Trophy. Till then no team had upset mighty Bombay (now Mumbai) on their home turf in a Ranji final.

And he was more electric behind the stumps. Anyone who saw the World Championship matches, and everyone who saw him stump Javed Miandad (off Sivaramakrishnan) in the final, would endorse it. This flamboyant wicketkeeper with cheetah-like celerity and gazelle-like grace was a bobby-dazzler.

His aggression and attitude were so infectious that the 1985 team excelled as a great fielding unit. He naturally captivated our cricket crazy nation, and everyone deemed Sadanand Viswanath to be a worthy successor to Syed Kirmani (his idol).

More notably, he got under the skin of opponents, but minus the theatrics of a Sreesanth or a Harbhajan Singh.

Yet, few would have noticed that spring that young Viswanath was actually announcing the arrival of New India.

The Benson and Hedges World Championship was surely his crowning glory. Later, in the same month, India won the Rothmans Cup in Sharjah, in which India bundled out Pakistan for paltry 87 runs after Imran Khan had skittled India out for mere 125 runs. In September, he pouched six catches in the third Test against Sri Lanka at Kandy to equal the Indian record.

He burst into our horizon as a meteor and then simply faded. What happened to this promising cricketer?

It was whispered that fame went to his head, he could not handle the adulation of fans and he hit the self-destruct button. The successive calamities that befell him too made the rounds. Then the word spread that he had hit the bottle and had become a bacchant.

I asked him and I heard the voice and story of a survivor. The voice of the chirpy fellow behind the stumps but tempered by the harsh trials of vicissitude.

He lost his dear parents, in devastating tandem, while he was trying to cement his place in the national team. A failed relationship was the third catastrophe to pummel him. An untimely finger injury worsened matters. Shattered, and deprived of emotional sheet anchor, young Vishy struggled to fend off competition from Kiran More, Chandrakant Pandit and a revitalised Syed Kirmani himself.

He began to drift like an anchorless ship across a choppy ocean. As normally happens, many friends who hung out with him in his halcyon days, deserted the adrift ship.

Worse, since he enjoyed sundowners and bubbly, he was branded a dipsomaniac and they hung him out to dry.

He was sidelined after the ODI against the West Indies played at Ahmedabad in January 1988. All together, he played just three Tests and 22 one-day matches for India.

When life is in a freefall, not deploying the parachute means termination in a crash. So he strove to put his life and finances in order, in anonymity. His first pit-stop was Abu Dhabi where an NRI happily offered him a job. But homesickness got the better of him in seven months; so he hopped back to Bangalore and rejoined the bank.

Four years later, in 1995, he quit the bank. With finances in desperate straits, he had to scrimp every pie to keep his head above water; so he moved out from a house into an inexpensive hotel room.

He took fresh guard to begin a third innings. Now a Level III coach, he started the Sadanand Viswanath Cricket Academy in 1996. About this time, a godsend arrived. A CCI invitation to appear for umpiring examinations. Ten former Test players (Bishen Bedi, Kirmani, Lalchand Rajput, Yashpal Sharma, Maninder Singh) turned up at Hyderabad. He got through.

Apart from this, Shashank Manohar, the present sovereign of BCCI, invited him to coach the Vidarbha boys. He was fully involved in cricket, again.

More good tidings arrived. Though two earlier attempts had proved fruitless, Brijesh Patel (and other office-bearers of the Karnataka State Cricket Association) succeeded in organising a benefit match for Viswanath in 2003, almost 16 years after he hung up his boots. He opened an auto showroom on the plot allotted by the Karnataka government in recognition of his World Championship heroics.

I asked him if he wished to share regrets. "The strife and the struggle to prevail were not ideal circumstances to think of nuptials. I hope I can tie the knot soon and settle down." Loneliness can be killing.

Since he had seen, been and experienced the crests and troughs of life, I prodded him to give a message to the youngsters. "Think big, go for it big from the beginning itself, stay focussed, dodge distractions; national interest is supreme; never forget your roots and sacrifices of your forebears. Yes, in life, be on the front foot, always."

What stumps me is that Viswanath has been umpiring for almost 15 years (at present, the only Test player as umpire) but he hasn't yet been elevated to the highest post -- officiating international matches. Mind you, other countries have been unsparing in promoting former national players (Paul Reiffel, Ian Gould, Asoka de Silva, Kumar Dharmasena). One hopes that the Board of Control for Cricket in India will accord him the springboard, soon.

March 10 is the anniversary of the remarkable World Championship conquest. Did he celebrate it this time? Of course, but in private.

What about last year, the silver jubilee of the triumph? "Low-key, not big as I expected," his voice trailed off.

He then waxed emotional about the unstinting support he received from Sunil Gavaskar and Ravi Shastri, and the privilege of rubbing shoulders with the giants of the game like Kapil Dev, Jimmy Amarnath, Dilip Vengsarkar, Kris Srikkanth, Mohammed Azharuddin, Roger Binny et al.

The momentous Melbourne Moment did not find a mention even as a footnote on March 10. Perhaps the media was too engrossed in cranking up further the hype and hoopla surrounding the ongoing cricket World Cup.

This nation of cricketaholics, fans and addicts obsessed with cricket trivia and records, and a media that gets high on every sniff of cricket domination has apparently not yet grasped the significance of March 1985.

Image: Sadanand Vishwanath is a coach and umpire now.

M P Anil Kumar, a former IAF fighter pilot, will contribute columns throughout the World Cup.
Please read more about The Pilot who is a Fighter

Read his recent columns:
How ads are sucking the fun out of Cricket
Of Gavaskar and memories of the Cup
The Original Master Blaster!

Keeper, keeper on the ball

1 bn in income, but BCCI pays umpires a pittance!