India scored a comprehensive innings and 135-runs victory over Australia in the second Test at Hyderabad on Tuesday to take an unassailable 2-0 lead in the four-match series.

Needing an improbable 267 runs, on a turning track, to make India bat again, the visitors collapsed for 131, adding only 57 runs (in 35 overs) on the fourth day of the Test. 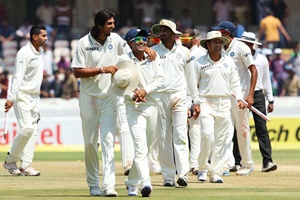 R Ashwin was the pick of the Indian bowlers, bagging five for 63, his eighth five wicket haul in Tests.

Ravindra Jadeja finished with figures of three for 33.

It took India only 13 minutes to make the breakthrough on the fourth morning.

Ishant Sharma, starting the proceedings for the home team, having not bowled at all on the third day, struck in his second over -- the third of the innings -- having Shane Watson (9) caught behind on the leg side.

It was his first wicket of the series.  Watson failed to add to his overnight score.

In his fourth over, Ishant made a similar appeal, trying to get Michael Clarke (on four) out. Umpire Kumar Dharmasena remained unmoved, though, the Australian captain going on to smash Jadeja over mid-off for a six in the next over.

Clarke (16) and Cowan put on 33 runs for the fourth wicket, taking the score past 100 before Jadeja produced a beauty that crashed through the defences of the former.

Australia's captain is their most consistent player in the series, and with his dismissal his team’s hopes ended.

For the record, Jadeja has had him on three out of four occasions in the series, twice in this match.

Cowan (44) was dropped by substitute Shikhar Dhawan at short leg off Ashwin. The opener, however, failed to add to his score, Jadeja having him caught by Virender Sehwag at first slip two balls later.

Jadeja, who struck twice in the space of five balls, contributed again, when his direct hit, despite of a misfield, ran Moises Henriques out even before the latter had opened his account.

Glenn Maxwell didn’t survive for long either, a carom ball from Ashwin catching him on the wrong foot. Neither did Peter Siddle (four), who became Jadeja’s third victim on the day.

Ashwin accounted for Matthew Wade (10), caught by Sehwag at first slip, the next ball.

And when Ashwin had James Pattinson (0) out leg before, it was all over for the visitors. The home team ensured they will not lose the series. 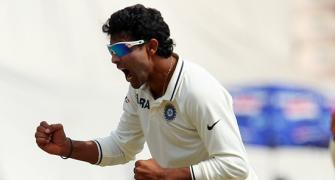 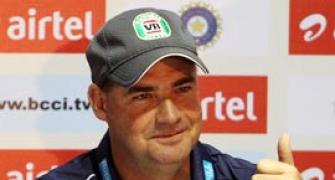 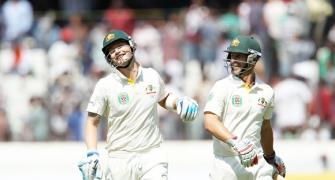 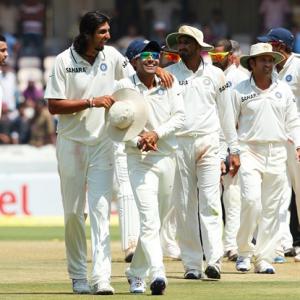 Photos: How the spinners wrapped the Test for Team India 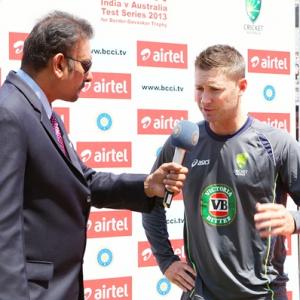 'There is no excuse for making 237 after winning toss'