In-form Dhawan's the one for India!

It wasn't the usual free-flowing Shikhar Dhawan innings one would generally associate with the dashing left-hander. The India opener had to graft and work hard for every run at the start while also benefiting from three 'lives' in the second ODI against Zimbabwe in Harare on Friday.

Had Zimbabwe made the best of the chances Dhawan offered them early in the match, they could have restricted the visitors to a meagre total.

The new ball was doing things early on and Zimbabwe's pacers, using the conditions to good effect, troubled Dhawan a lot in the first few overs. The opener needed 70 balls to complete his half-century, but once he got into the groove the boundaries started to flow. The next fifty took just 45 deliveries as Dhawan, in the company of Dinesh Karthik, rescued India from a precarious 65 for four in a brisk 157-run partnership for the fifth wicket and enabled them to get to a huge 294 for eight in their 50 overs.

This was Dhawan's third century in ODIs in 2013; he continues to get stronger with every passing game. Since coming back into the team with a swashbuckling century in the Test against Australia in Mohali, earlier this year, he has proved to be an important cog in India's batting line-up.

"I have been in really good form. Before I came into the Indian team I was scoring well in domestic cricket too," the left-hander claimed.

Dhawan also enjoyed the benefit of Zimbabwe's lacklustre showing in the field as he got as many as three 'lives'. He was bowled off a no-ball by Kyle Jarvis when on three and then dropped by wicketkeeper Brendan Taylor on 14 a few overs later.

The left-hander got his third lifeline on 70, when he slog swept leg-spinner Prosper Utseya but the fielder at deep midwicket misjudged it and the ball went through his fingers for a four.

"It was one of my lucky days, I nicked twice but they dropped it. It was my day but the wicket was not easy to bat on," he said after the match.

India took full toll of Zimbabwe's bowling in the second half of their innings, scoring 140 runs in the last 16 overs, with Dhawan leading the charge.

What was impressive about Dhawan's innings was that despite being unable to score boundaries freely in the initial overs he was content on playing patiently and accelerating in the latter part of his innings.

Despite getting off to a good start courtesy Vusi Sibanda's fluent half-century, Zimbabwe were never able to challenge India's huge score and went down tamely by 58 runs.

They now trail 0-2 in the five-match series. 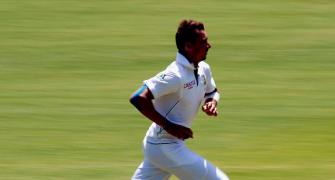 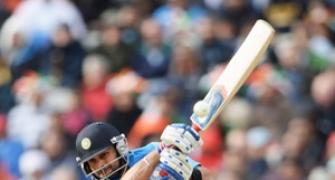