Suresh Raina hit a timely century to help India recover from a precarious situation to prevail over Zimbabwe by six wickets, finishing their group league engagements with a clean slate in the World Cup in Auckland.

The defending champions finished with an all-win record in their six Group-B league matches thereby stretching their number of successive victories in the tournament to 10 over two editions surpassing Clive Lloyd's West Indies’ record which stretched from start of 1975 Prudential Cup to the first match of 1983 edition (losing to India at Old Trafford).

They only have Australia in front of them with 24 straight wins between 1999 and 2011 editions, a feat achieved under Ricky Ponting's captaincy.

The defending champions will now meet neighbours Bangladesh in the quarter-final at the Melbourne Cricket Ground on March 19. India were in a spot of bother at 92 for four when skipper Dhoni joined Raina as the duo sealed the match with a defining unbeaten 196-run record stand for the fifth wicket off 156 balls.

Raina, who scored his fifth ODI ton had nine fours and four sixes, in his innings. There were the customary muscular heaves over deep mid-wicket region for sixes as were the delicate late cuts.

While the first 50 came off 67 balls, the next one took only 27 deliveries as the UP left-hander suddenly put his foot on the accelerator. The only blemish in his innings was a mistimed sweep off Sikandar Raza that was dropped by Hamilton Masakadza at short fine leg when he was on 47.

India off to a poor start India's Shikhar Dhawan looks at his shattered stumps after playing on to be dismissed during their World Cup match against Zimbabwe at Eden Park. Photograph: Nigel Marple/Reuters

It was a disastrous start for India as openers Rohit Sharma (16) and Shikhar Dhawan (4) went cheaply while Virat Kohli (34) frittered away a good start, so did Ajinkya Rahane (19) as Zimbabwe did try their best to push India hard.

But the experienced pair of Dhoni and Raina has seen India through in many such situations in the past and the opposition bowling didn't have the quality to keep a check on them for long as the inevitable happened.

After playing himself in, it was in the 30th over when Raina released a bit of pressure with successive sixes off left-arm spinner Sean Williams. One was hit over deep mid-wicket while the other was into the first tier of the stands over long-on.  That particular over yielded 15 runs and India’s chase was on track.

Dhoni then joined Raina to tee off with a couple of boundaries off medium pacer Solomon Mire. First was a pull-shot and it was followed by hard slash over point as the 50-run stand for the fifth wicket came off 57 balls. The 150 of the team duly came in the 34th over and there was no stopping after that.

Dhoni signalled India's victory with a six, triggering off scenes of celebrations in the dressing rooms with the players hugging each other and shaking hands. Earlier, Brendan Taylor played the innings of his life in his final ODI for Zimbabwe as his 138 helped the team manage 287 all out in 48.5 overs.

The total was highest by any country against India in the current edition surpassing Ireland's 259 in the previous game.

Taking the Indian bowlers by the sword after being put into bat, Taylor smashed the white ball around the small Eden Park ground, cracking 15 boundaries and five sixes in his 110-ball stay.

Having scored his first 50 off 64 deliveries, Taylor scored his next 88 runs in only 46 balls as the three-figure mark was reached in 99 deliveries.

It was his eighth ODI century and highest by any Zimbabwean and also the first against India in this edition of the mega event.

He got a standing ovation from the Indian supporters as the likes of Suresh Raina, Virat Kohli and Shikhar Dhawan congratulated the 29-year-old, who is migrating permanently to England after this match due to financial constraints. 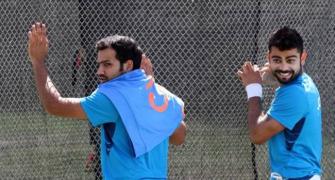 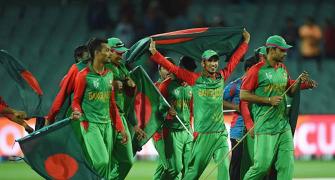 'India will do very well not to take Bangladesh lightly' 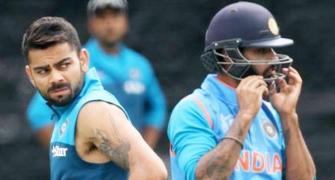 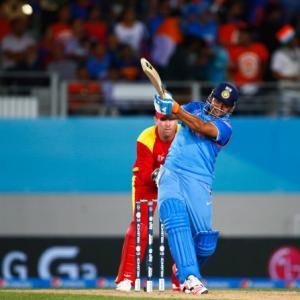 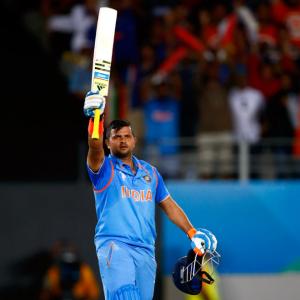