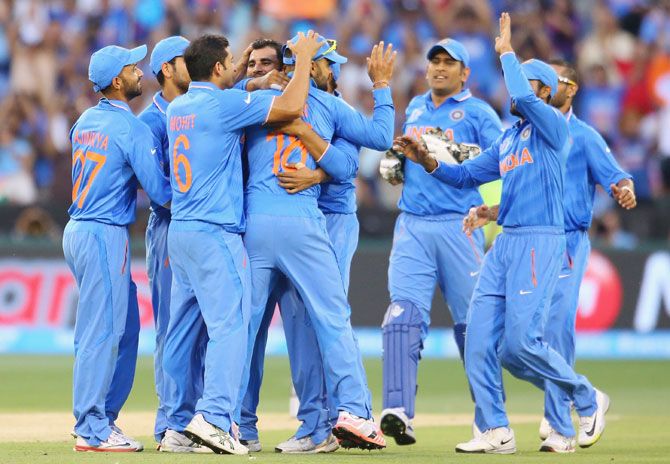 Shikhar Dhawan smashed 137 as India rode on a clinical display to break their World Cup jinx against South Africa with an emphatic 130-run victory in a pool B match at the Melbourne Cricket Ground on Sunday.

His career-best 137 propelled India to a comfortable 307 for seven before the bowlers performed brilliantly to bundle out the Proteas for 177 in 40.2 overs in what turned out to be a rather lopsided contest.

This was India's maiden World Cup victory over South Africa after having lost the meetings in 1992, 1999 and 2011. 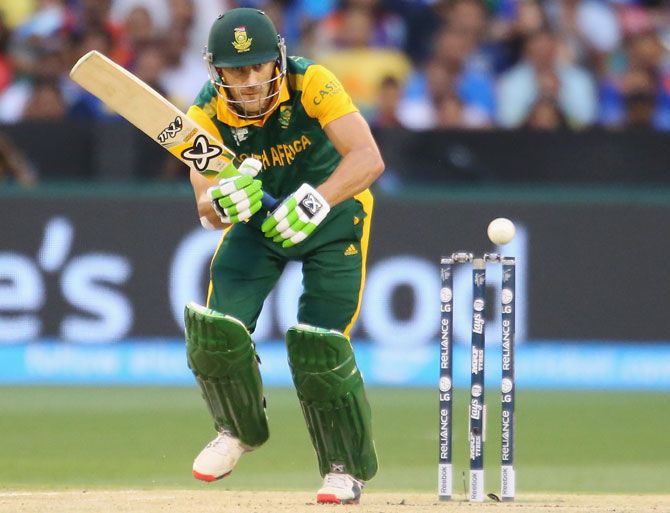 The bowling unit fired in unison as South Africa never recovered once skipper AB de Villiers (30) fell short of his crease, with Mohit's accurate throw on top of the stumps sending the destructive player back to the pavilion.

De Villiers and Du Plessis were going strong at one stage adding 68 runs for the third wicket as South Africa reached 108 for two before the skipper got run-out.

Du Plessis (55) tried his best to stem the rot but once he mistimed a pull-shot off Mohit to Dhawan at covers, it was just a mere formality for the 'Men In Blue', who hardly put a foot wrong in front of the 86,786 crowd of which at least 75,000 were Indian supporters.

With Sachin Tendulkar cheering them from the stands, it was an electric atmosphere at the MCG as Dhoni's men cantered home in style. The Indian dressing room erupted in joy and the players hugged each other after last man standing Imran Tahir was trapped leg before by Ravindra Jadeja. Earlier, Dhawan blazed his way to a career-best century as India posted a commendable 307 for seven. Courtesy Dhawan's 137 off 146 balls and Ajinkya Rahane's 79 off 60 deliveries, India posted their highest total in a World Cup game against the Proteas, surpassing their previous highest of 296 in Nagpur, in the last edition.

It was yet another mini-collapse at the death as India lost five wickets for 46 runs in the last 6.3 overs. En route his seventh ODI ton, that had 16 boundaries and two sixes, Dhawan earned the distinction of achieving the highest score by any batsman in a World Cup game against South Africa.

The Delhi left-hander's love affair with South African bowling continued as this was his second ODI hundred against the Proteas in successive ICC tournaments, after having scored one back in 2013 in a Champions Trophy game in Cardiff.

The Indian top-order once again fired beautifully. Dhawan and Virat Kohli again had a productive partnership that yielded 127 runs for the second wicket. Ajinkya Rahane of India bats during the Pool B match against South Africa in Melbourne. Photograph: Quinn Rooney/Getty Images

Rahane was in a mood to make amends for his failure in the Pakistan game and he matched Dhawan stroke for stroke during their rollicking 125-run stand for the third wicket in only 16.3 overs.

He hit seven fours and three sixes, as Dhawan, who regained form just when it mattered the most, started his innings from where he had left off against Pakistan.

Rahane showed why he is rated so highly. The six over long-off of Steyn's bowling was pure delight as was his step out off Tahir to dispatch him for maximum.

For South Africa, Steyn bowled a brilliant last over with four dot balls to end with figures of 1-55 while Morne Morkel had 2-59 from nine overs.

Wayne Parnell recorded the worst figures -- 1-85 off nine overs -- for the consolation wicket of Dhawan. 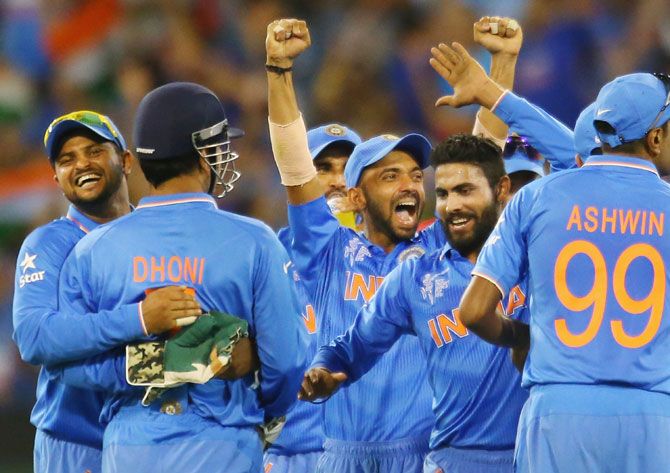 The Indian team celebrates the fall of a South African wicket at the Melbourne Cricket Ground. Photograph: Scott Barbour/Getty Images

Mohit Sharma (2/31 in 7 overs), Ravichandran Ashwin (3/41 in 10 overs) and Mohammed Shami (2/30 in 8 overs) kept the opposition batsmen under tight leash for a better part of the innings.

With two wins from as many matches, India now have a very good chance of qualifying for the quarter-finals as group leaders.

It was yet another commendable show by the Indians, who came into the tournament with a string of poor results in the tri-series preceding the mega-event.