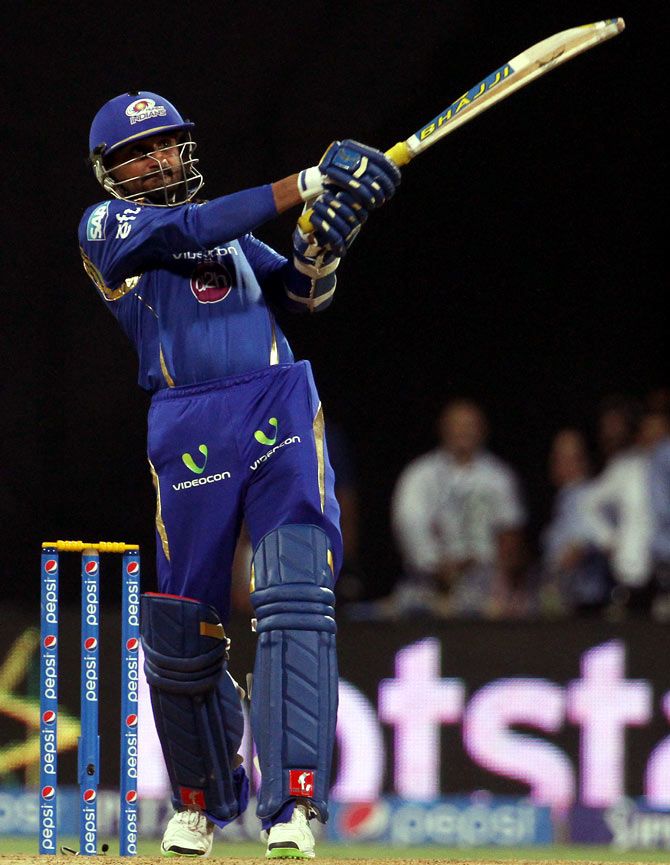 Harbhajan Singh slammed an entertaining half-century but could not prevent Mumbai Indians from going down to Kings XI Punjab by 18 runs in the Indian Premier League match at the Wankhede stadium in Mumbai, on Sunday.

Set 178 for victory, Mumbai were reeling on 59 for six in the 14th over when Harbhajan walked out to the middle and he nearly took his team to an unlikely victory, smashing an entertaining 64 from 24 balls, hitting five fours and six sixes.

He got good support from Jagadeesha Suchith, who scored 34 from 21 balls, as the duo put an amazing 100-run stand for the eighth wicket, from just 37 balls but in the end it was not enough to prevent Mumbai from suffering their second straight loss in the tournament.

Captain Rohit Sharma was dismissed in the first over of the innings, leg before wicket by Sandeep Sharma for a duck, while Aditya Tare was dismissed by Anureet Singh for seven.

Australian pacer Mitchell Johnson rocked Mumbai further with the wickets of Aaron Finch (8) and Corey Anderson (5) as the hosts slipped for 46 for five, in the 12th over.

Earlier, Kings XI Punjab, where off to a blazing start, had a wobble in the middle overs against spin before skipper George Bailey's well-paced unbeaten half-century helped them score a challenging total of 177 for 5. 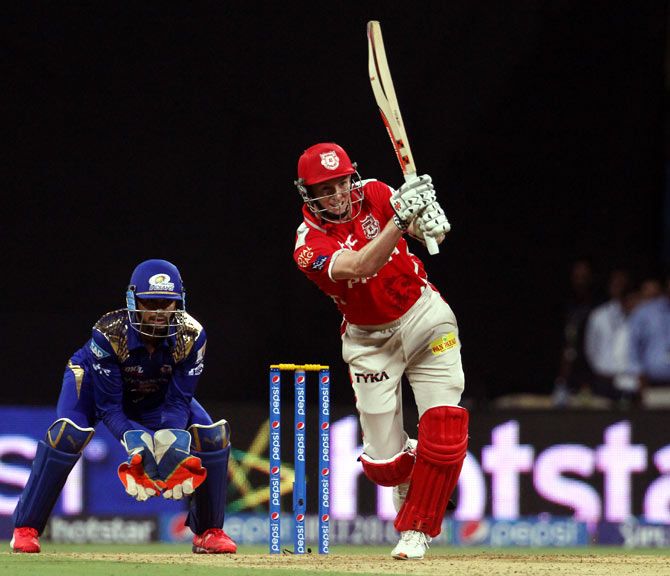 After the flying start provided by Virender Sehwag, who made a typically belligerent 35 in 19 balls, and Murali Vijay's 36 in 29 balls (the duo putting on 60 in 40 balls), the visitors got bogged down against Harbhajan before Bailey struck meaty blows and bailed them out with a 32-ball 61 not out, studded with three sixes and four fours.

Bailey, who came in at the fall of the third wicket at 88 in the 11th over, put on 46 runs for the fourth wicket with David Miller (24), which was the other good partnership in the innings.

For Mumbai Indians, Harbhajan was the most impressive bowler with 2 for 20 as he got rid of both the openers. Lasith Malinga (2/34) and debutant Jagadeesha Suchith (1/41) were the other wickets takers while Vinay Kumar was the most expensive to finish with none for 46.

Put in to bat, Kings XI raced to 46 without loss after the first five overs, with both Vijay and Sehwag, who hit six fours and a six, wading into the bowling of Vinay Kumar to cart the Karnataka pacer to all parts of the ground.

Vijay, who struck six fours, started the carnage by smacking Kumar in the opening over for two leg-side fours before Sehwag hit the Ranji Trophy winning captain for a couple of fours, the first a lucky one off the inside edge, and a flicked six with nonchalance.

Pawan Suyal, included in the side in place of Jasprit Bumrah who did not impress in the team's lung opener against title holders Kolkata Knight Riders on April 8, kept things quiet at the other end.

Sehwag then struck Lasith Malinga, who replaced Kumar -- after the latter's expensive 3-over spell for 35 runs -- for two successive fours to help the Punjab side to race past the 50 run mark.

The introduction of spin in the form of Harbhajan to bowl the sixth over brought about the breakthrough for MI as Sehwag skied the veteran off-spinner to Kieron Pollard at long on.

Rookie left arm spinner Jagadeesha Suchith, who replaced the experienced Pragyan Ojha in the playing eleven, then sent back the dangerous Glenn Maxwell through a catch at deep mid-wicket in his very first over to help the home side apply the brakes.

Harbhajan struck in the 11th over with a short ball that was mishit to deep square leg fielder by Vijay and another promising knock came to an abrupt end.

The good work of the spinners, particularly Harbhajan, kept Kings XI in check in the next five overs and at the end of 15 the visitors were 127 for 3.

Thanks to captain Bailey, the last five overs fetched the visitors 50 runs.