Harbhajan apologises, hits back at SGPC

Ace off-spinner Harbhajan Singh on Saturday apologised to the Sikh community for "hurting" their emotions by keeping his hair open in an advertisement.

Harbhajan, who was pulled up by the Shiromani Gurudwara Prabandhak Committee, the apex religious body of Sikhs, said he respects the emotions of the people of his community and did not do it intentionally.

"If my action has hurt the Sikh community, then I feel sorry for it. I will take note of it (in future)," Harbhajan said.

The SGPC on Friday demanded an apology from the ace spinner, saying Sikhs are prohibited from keeping their hair open.

However, Harbhajan on Saturday slammed the SGPC for raising the issue in the media.

"It's bad that the SGPC took up the issue in media. If they had any problem, they should have called me like a son and told me. But their action was wrong," he said.

Harbhajan said he had no idea that his photo-shoot in this fashion for an advertisement would become so big an issue.

"I respect the emotions of Sikhs and I never knew it would snowball into such a big issue."

The SGPC head had said they would seek an apology from the (liquor) company that had released the advertisement, also figuring other popular cricket stars Yuvraj Singh and Mahinder Singh Dhoni along with the spinner.

Avtar Singh had said that Harbhajan should learn something from English spinner Monty Panesar, who despite being brought up abroad and playing for England promotes Sikhism.

However, Harbhajan said there are thousands of Sikhs who had even cut their hair and are occupying highest posts in public life, but nobody pointed fingers at them.

"They compare me with Panesar, which is wrong. Comparisons should not be made in the first place, but if they have to, why SGPC does not compare me with Yuvraj Singh and Gurdas Mann (both Sikhs who have trimmed their hair)," he said. 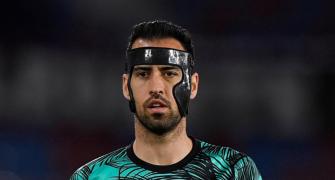