A statement from the West Indies Cricket Board said the trio had been left out of squad for the opening two games in the five match series as part of a policy to encourage the development of younger players.

The move comes after widespread disappointment with the displays from senior players during the recent World Cup, where West Indies again failed to impress. 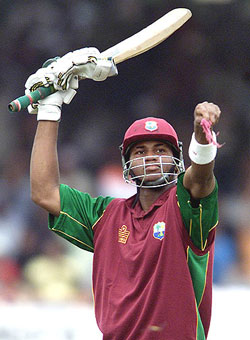 Nonetheless, the dropping of three former captains who have made up the bulk of the Caribbean run-making in the past five years is a drastic move.

Jamaican Gayle is 31, Sarwan is 30 and fellow Guyanese Chanderpaul is 36.

Ernest Hilaire, chief executive of the board, said the aim was to bring in players who could improve on the disappointing World Cup campaign which ended with a quarter-final defeat to Pakistan.

Antiguan leg spinner Anthony Martin is the only uncapped player named in the squad for the opening two games against the touring Pakistanis in St Lucia.

Marlon Samuels, the 30-year-old Jamaican batsman, is named in the ODI squad for the first time since serving a two-year international ban for passing on team information to an Indian bookmaker.

Among the players who will have a chance against the Pakistanis are Barbadian batsman Kirk Edwards, Guyanese leg spinner Devendra Bishoo and Trinidad opening batsman Lendl Simmons.

Trinidad all-rounder Dwayne Bravo has recovered from the knee injury he sustained in the recent World Cup and returns to the squad -- he will be vice-captain to skipper Darren Sammy.

After a Twenty20 game on April 21, the opening ODI games in St.Lucia take place on April 23 and 25 before two games in Barbados and the final ODI encounter in Guyana.

The teams will also face off in two Test matches in May in Guyana and St.Kitts before West Indies host world champions India for a single Twenty20, five ODIs, and a three Test series.

© Copyright 2022 Reuters Limited. All rights reserved. Republication or redistribution of Reuters content, including by framing or similar means, is expressly prohibited without the prior written consent of Reuters. Reuters shall not be liable for any errors or delays in the content, or for any actions taken in reliance thereon.
Related News: Marlon Samuels, ODI, Ramnaresh Sarwan, Dwayne Bravo, Anthony Martin
COMMENT
Print this article
Sarwan recalled for Windies World Cup campaign
Hail Harbhajan, Bravo Mumbai!

Dwayne Bravo on his efforts against India