Gautam Gambhir (69) scored a confident half-century to complement the good bowling as Delhi thrashed Bengal by six wickets to enter the summit clash of the Vijay Hazare trophy in Visakhapatnam on Saturday.

It was a superb all-round show by Delhi as they first dismissed Bengal for a meagre 156 in 40.1 overs and then overhauled the target with 15.3 overs to spare.

Now Delhi will clash with Assam, who beat Kerala by five wickets in the other semi-final, for the title of the domestic One-day tournament.

Had it not been for a fantastic 87-run knock by Manoj Tiwary and his 73-run partnership with skipper Laxmi Ratan Shukla (30), Bengal could not have even posted a respectable total.

Pravinder Awana drew the first blood as be castled Wriddhiman Saha and after that Narwal and Sangwan ripped apart the Bengal middle-order.

Sood played his part by cleaning up the tail.

Delhi also did not have a good start, losing opener Dhruv Shorey (10) early but its middle-order responded well. Unmukt Chand, who opened with Shorey scored 22 while Gambhir scored 69 off 78 balls.

Delhi lost Chand and Milind Kumar (18) while Gambhir batted superbly from the other end.

Delhi needed only 23 runs when Gambhir was dismissed by Anustup Majumdar and Rajat Bhatia (28) and Jagrit Anand (7) steered the side to comfortable win.

Assam rode on Gokul Sharma's all-round display to continue its fairytale campaign in this year's Vijay Hazare Trophy as they defeated Kerala by five wickets to enter the final of the domestic ODI championship.

After his three-wicket haul with the ball, Gokul (51) scored an unbeaten half-century to guide Assam to the historic win at the Y S Rajasekhara Reddy ACA-VDCA Cricket Stadium.

Opting to ball, Assam first dismissed Kerala for 197 in 48.5 overs and then overwhelmed the target with five wickets in hand and 24 balls to spare.

Only three Kerala batsman managed double digit scores with opener VA Jagadeesh top-scoring with a fighting 89 off 109 balls. Besides Jagadeesh, Raiphi Gomez (51) and Rohan Prem (34) were the other contributors with the bat for Kerala.

Chasing the modest target, Assam were in for early jolt as they lost their first three wickets for just 28 runs before Tarjinder Singh (49) and opener Pallav Kumar Das (37) steadied the ship with a 72-run fourth-wicket stand.

Just when it seemed Assam were in control of the proceedings, Pallav and Tarjinder departed in quick succession to make things difficult for the North-East team. 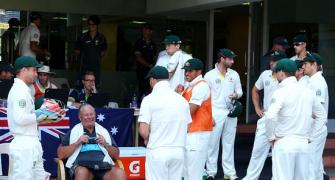 One down, can Australia do an England?