England will stay No. 1 for a long time: Harmison

Former fast bowler Steve Harmison, believes that with Andrew strauss in charge, England will stay on top of world cricket for a long time to come.

"With him (Strauss) in charge, I can see England staying No. 1 for a long time," Harmison was quoted as saying by The Mirror.

"It is just brilliant what the two Andys have done with the England team," the big-bodied speedster said.

"But I think Andrew Strauss really has been the man above all others though who has driven this team forward. He took over in ­difficult circumstances in the West Indies in 2009 and he has led with courage. I played with Straussy in the first academy intake in Australia. I saw then what a tough b***** he was. If you want a man in the trenches with you, Straussy is your man." 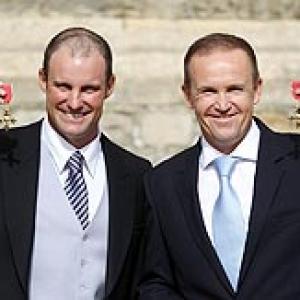