England criticised for not making most of conditions against Australia 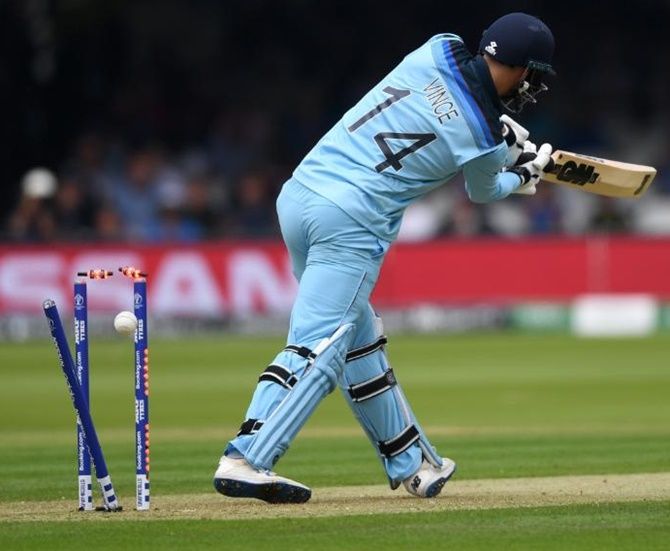 IMAGE: England were stumbling at 26-3 with James Vince, Joe Root and Morgan back in the pavilion by the end of the sixth over. Photograph: ICC/Twitter

England's 64-run loss to Australia in the World Cup on Tuesday left their semi-final qualification hopes in the balance and British media outlets settled on a similar theme, focusing on the hosts' lack of application as compared to their rivals.

Australia (12 points) sealed the first semi-final spot with their sixth win while England -- fourth with eight points and two games left -- must now keep one eye on other results with Bangladesh and Sri Lanka breathing down their necks.

England great Geoffrey Boycott called their batsmen 'one-dimensional' and 'flat-track bullies' and that was evident from some of their dismissals by bowlers Jason Behrendorff (5-44) and Mitchell Starc (4-43), who thrived in seam-friendly conditions.

"England have simply been unable to deal with surfaces that have not allowed them to play their go-to explosive and aggressive game," former cricketer Steve James wrote in The Times.

"(Eoin) Morgan said afterwards that it would have been a 'horrific' decision to bat first... in these conditions, but from now on should he consider batting first? That is three losses chasing now."

Although England won the toss and elected to bowl at an overcast Lord's, Morgan was let down by his bowlers as Australia's patient 123-run opening stand gave them a platform to set a competitive total.

By contrast, England were stumbling at 26-3 with James Vince, Joe Root and Morgan back in the pavilion by the end of the sixth over.

"England were guilty of bowling too short in seam-friendly conditions as Aaron Finch (100) and David Warner (53) made headway in an opening stand... their third ton-plus partnership of the tournament," David Ruse wrote on Sky Sports.

"Australia were 44 for no loss after their first 10 overs as they dealt with the short stuff, England were reduced to 39-3 after their initial 10 as they floundered against the pitched-up deliveries."

Former English captain Michael Vaughan was particularly critical of Vince, who he gave 1/10 in his player ratings in The Telegraph, after Jason Roy's replacement failed for the third time and fell for a duck in the second ball of the innings.

"England have a decision to make. No point continuing to play him (Vince) after three failures," Vaughan wrote.

"How is he going to suddenly turn it on against India in a game when if they lose they could be out (of) the World Cup when he has no form behind him?"

"They will have to wheel out Jason Roy or, if not, promote Moeen Ali or Chris Woakes to open. Neither options are ideal but they can't do any worse."

England's final two matches are against the two remaining unbeaten sides in the tournament -- India and New Zealand.

They are two teams England have not beaten in seven attempts at the World Cup since 1992, prompting another former captain Mike Atherton to borrow a phrase made famous by former Manchester United boss Alex Ferguson.

"It is squeaky bum time now."

© Copyright 2021 Reuters Limited. All rights reserved. Republication or redistribution of Reuters content, including by framing or similar means, is expressly prohibited without the prior written consent of Reuters. Reuters shall not be liable for any errors or delays in the content, or for any actions taken in reliance thereon.
Related News: England, James Vince, Morgan, Australia, Joe Root
COMMENT
Print this article 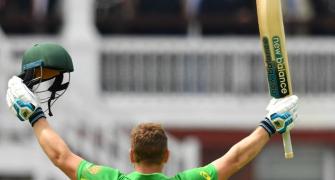 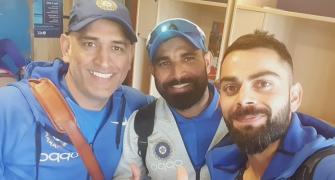 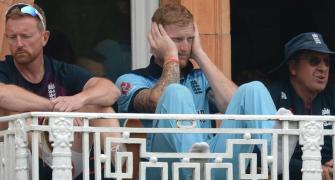 This is still our World Cup, insists Ben Stokes 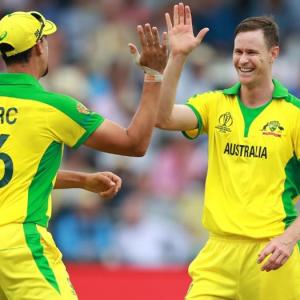 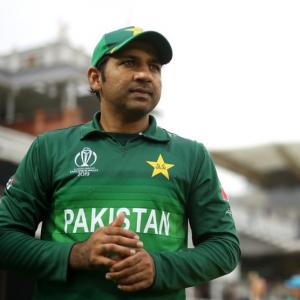