Nostalgia and anecdotes, given to us by cricket's great writers, do much greater justice to the game, says Uddalok Bhattacharya. 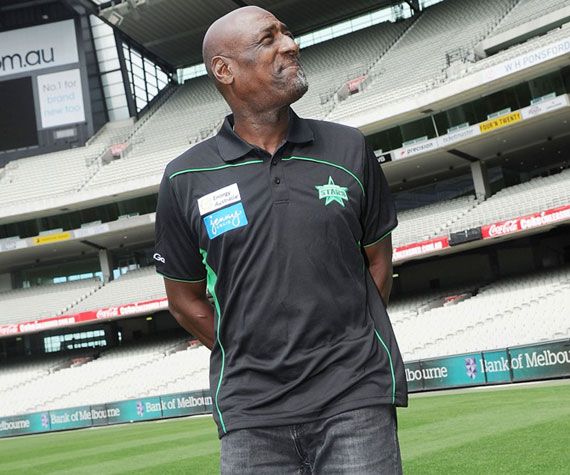 I did not keep track of cricket after 1991, the year Vivian Richards left the game and so I do not know who the best boys of the game are.

But when I am told that the best Indian cricketers of all time barring three (Sunil Gavaskar, G R Vishwanath and Kapil Dev) did not play before 1992, I cannot but resist the temptation of restating some honest truths. So let me begin with an anecdote.

How many cricket followers of the game today know that Vijay Merchant has the best average in first-class cricket after Sir Don Bradman?

The formidable Harold Larwood, when he saw batsmen wearing the helmet, asked: 'Why are they trussed up like turkeys? (They) should stand up and be counted like men.'

What he was referring to was the batsmen's 'fear' of fast bowling.

How many batsmen who played after 1992 are/were afraid of fast bowling I do not know. But one thing is certain and it is that the fast bowler is no longer as much a fearsome animal today as he was 40,50 years ago.

Not just the helmet, the batsmen today wear the shin guard, chest guard, elbow guard, thigh guard, and so on -- the equivalents of the medieval warrior's cuirass, breastplate, braces, greaves, casque, etc.

More important than all of these were the uncovered wickets.

Having to face the Andy Roberts of 1974, or the John Snow of 1971, or the Wes Hall of the late 1950s and early 1960s in those day's conditions was a different matter altogether.

If you do not believe me, ask Gavaskar.

There is again the additional advantage of the playing arena becoming smaller. Hitting an over-boundary then was no doddle. 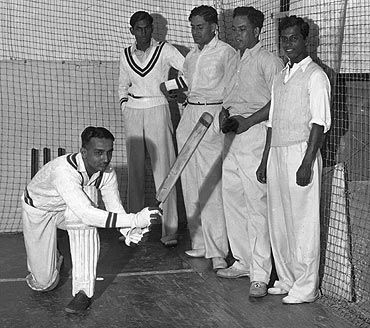 That India lost much more frequently than they won in its early years of cricket is well-known.

Most of our players were mediocre. But some were outstanding.

How many cricket followers of the game today know that Vijay Merchant has the best average in first-class cricket after Sir Don Bradman?

Take Vijay Hazare. He made his debut in international cricket when he was 31 because his best years were lost to the War.

Still he retired with an average of more than 47, which is the equivalent of, I would say, at least 55 in the helmet age (Sachin Tendulkar's average is lower than 55).

Statistics can prove things up to a point. They do not tell you how great Vivian Richards was nor do they reveal much about Neil Harvey.

One can bowl with one eye, but anyone with the slightest experience of playing cricket would admit that it is impossible to bat with that handicap. But Pataudi did, and scored six centuries and more than 3,000 runs.

Without the helmet and on uncovered wickets.

Sometimes fuzzy bits of statistics are used to prove the point India's recent spin bowlers are better than Bedi, Chandrashekhar or Prasanna. But what is not comprehensible even to the statistically minded is why Kapil Dev was chosen over Vinoo Mankad.

On both the two counts that hold for an all-rounder -- the batting average and the number of wickets taken per Test played -- Mankad fares better than Kapil Dev.

And on the criterion of the number of wickets taken per Test, Sydney Barnes of England possibly is on top, with almost seven wickets per match.

Has anyone heard of him in this day and age?

Until R Ashwin came, Prasanna had the distinction, among Indian cricketers, of taking the first 100 wickets in the least number of Tests (20).

And Chandrasekhar's strike rate is at par with that of Anil Kumble.

What is the upshot of this?

Statistics can prove things up to a point. They do not tell you how great Vivian Richards was nor do they reveal much about Neil Harvey. 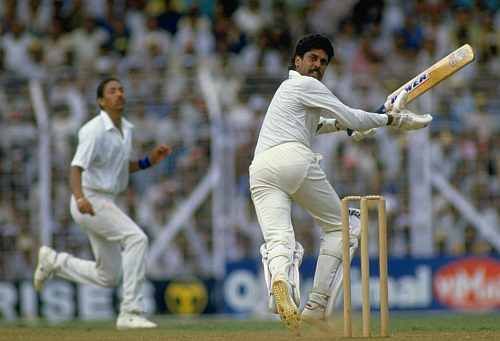 So in this respect nostalgia and anecdotes, given to us by cricket's great writers do much greater justice to the game.

Archie Jackson would have remained forever an unknown name but for Bradman's eulogy of him.

Australians who might have been 120 years old today would reluctantly admit that Victor Trumper was in some ways inferior to Bradman.

The modern generations have not heard of Trumper or Jackson, but so what? They haven't heard of James Dean either.

India are doing well in international cricket for the past three decades. But there is a catch here.

Consider badminton and table tennis. In the latter the last six world champions among men have been from China.

And in team championships, the Swaythling Cup has gone to China on the previous eight occasions.

The Chinese dominance is of the same level in badminton. But neither Victor Barna (table tennis) nor Erland Kops (badminton) was from that country.

Have the Chinese become suddenly so invincible? Or the others have drifted from the two games?

The story of cricket may be similar. 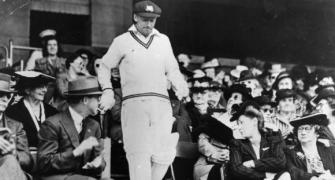