Dashing batsman Tillakaratne Dilshan stepped down as Sri Lanka captain following the team's dismal performance in South Africa, where they lost both the Test and ODI series.

Veteran batsman Mahela Jayawardene is likely to replace him as captain, but Sri Lanka Cricket is yet to make a formal announcement.

The 35-year-old Dilshan sent in his resignation on Monday from South Africa, where Sri Lanka concluded their tour on Sunday.

Dilshan's resignation did not come as a surprise. Under him Sri Lanka lost away series to England, Pakistan and South Africa, while also failing to win against Australia at home. He took over captaincy from Kumar Sangakkara after Sri Lanka's six-wicket defeat to India in the World Cup final last April.

Dilshan's own form with the bat dipped during his captaincy, and despite a historic Test win in Durban, Sri Lanka's first on South African soil, the loss in the Test and ODI series had him under pressure.

The continued failure of the team prompted sports minister Mahindananda Aluthgamage to sack the national selection committee last week and replaced it with a new team.

Coach Geoff Marsh, the former Australian opening batsman, was also asked to quit and replaced by Graham Ford, who coached South Africa between 1999 and 2002.

Source: PTI© Copyright 2021 PTI. All rights reserved. Republication or redistribution of PTI content, including by framing or similar means, is expressly prohibited without the prior written consent.
SHARE THIS STORYCOMMENT
Print this article
Sri Lanka to release 9 Indian fishermen
Majola will not quit Cricket South Africa 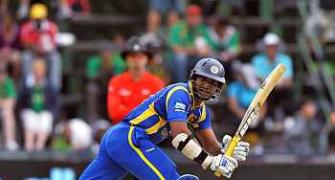