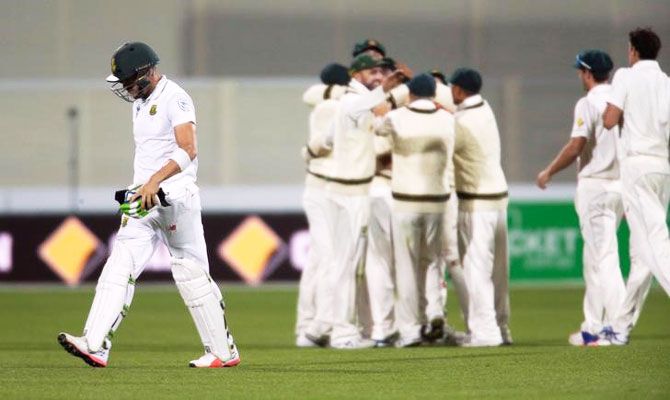 IMAGE: South African captain Faf du Plessis (left) walks off the field after being caught out by Australia's Peter Handscomb on the third day of the day-night Third Test match in Adelaide on Saturday.. Photograph: Jason Reed/Reuters

Australia took firm control of the day-night third Test on Saturday when they reduced South Africa to 194 for six at the close on day three, only 70 runs ahead of their hosts.

Desperate for a consolation victory to avoid a first 3-0 series sweep on home soil, Australia's tail boosted their first- innings tally to 383 before the bowlers took over.

Opener Stephen Cook was the one top-order batsman left standing after hitting 81 off 199 balls and will return to the crease on day four with Quinton de Kock, who had yet to score.

Paceman Mitchell Starc, who earlier completed his seventh Test half century, removed Elgar for a duck with the fifth ball of the innings before taking the key wicket of Du Plessis for 12 courtesy of a brilliant catch by Peter Handscomb.

The home side celebrated with the debutant as if they had won the match, an indication of the importance they placed on the wicket of Du Plessis, who contributed an unbeaten 118 to South Africa's first innings 259-9 declared.

Amla has been a less influential figure on this tour and, having been dropped on 13, lost his wicket to Josh Hazlewood for the fifth time in the series when he nicked behind for 45. Australia had resumed on 307-6 after enjoying their best day of batting in the series on Friday.

Usman Khawaja's match-changing innings ended when he was trapped lbw by Vernon Philander for 145 while Starc was caught and bowled by Kagiso Rabada for 53 to trigger the end of the innings.

After the string of batting collapses that contributed to humiliating defeats in Perth and Hobart, however, the hosts will have been pleased that their last four wickets were worth 100 runs.

Following Elgar's early departure off an outside edge, which Australia skipper Steve Smith took with a fine low catch in the cordon, Cook was even more circumspect as partners came and went at the other end.

Duminy (26) took the tourists past Australia's tally with two runs to third man but lost patience at the pace of scoring and tried to play across a Nathan Lyon delivery only to miss the ball completely and watch it take out his off-stump.

Bavuma made 21 before giving Lyon his second wicket shortly before stumps, the batsman attempting a sweep but getting an edge which looped off his arm for Smith to catch.

Lyon was getting serious turn by now and still had time to remove nightwatchman Abbott lbw for a duck to give the off-spinner figures of 3-48 and pin the South Africans firmly to the ropes.

© Copyright 2022 Reuters Limited. All rights reserved. Republication or redistribution of Reuters content, including by framing or similar means, is expressly prohibited without the prior written consent of Reuters. Reuters shall not be liable for any errors or delays in the content, or for any actions taken in reliance thereon.
Related News: Dean Elgar, Nathan Lyon, Faf du Plessis, Australia, Temba Bavuma
COMMENT
Print this article