David Cameron to teach Obama cricket. Can you help?

Sports can be a novel way of strengthening bilateral relations.

Barack Obama and David Cameron seem to have gone ahead and taken the initiative in that direction.

During the British Prime Minister's visit to the United States, the American President took time out to take his counterpart for a university basketball game.

The two leaders apparently spent good time together during the game between Mississippi Valley State and Western Kentucky in Ohio.

It is imperative here to mention that Obama is a huge fan of basketball. So much so that he has a court in the White House premises, one he uses on a regular basis to practice along with his daughters. 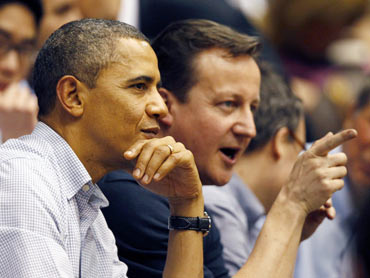 However, Cameron taking interest in basketball was a tad surprising. The American president did his bit to explain the nuances of the game to his British counterpart .

It was difficult for Cameron to grasp everything. But he was enjoying himself for sure.

"It's pretty fast and furious," he was quoted as saying during a joint interview at the interval.

"It's hard to follow sometimes exactly who's done what wrong," added the British Prime Minister, admitting Obama had helped him considerably in keeping up with the action.

The American President, though, seemed to have his own agenda.

"David Cameron is going to teach me the rules of cricket," said Obama, tongue-in-cheek.

The Gentleman's Game is not well-known in the United States and Obama's ignorance about the same is justified. But what better way to know it than ask the PM of the country that gave the world the sport?

"He's going to teach me cricket because I don't understand what's going on with that," continued Obama.

The two leaders had resorted to 'sporting banter' to further the relations between the two countries. But Cameron now has a tough job on hand.

May be, some of you readers can help. Suggest some tips that would help Obama understand how cricket is played. 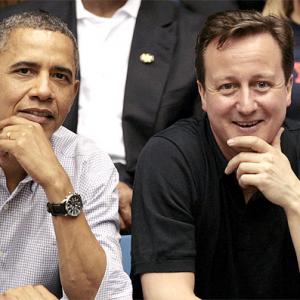