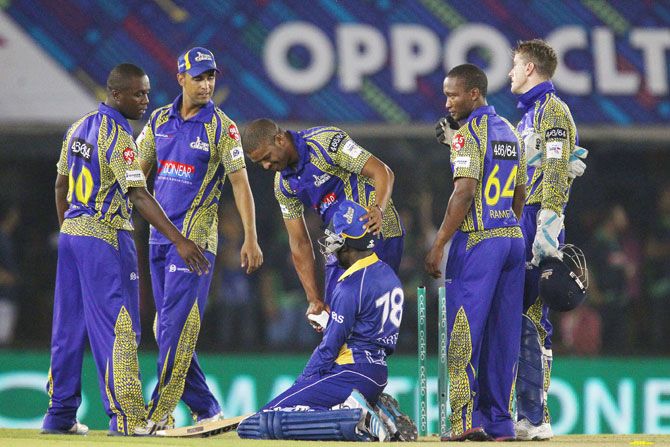 Vernon Philander of the Cape Cobras consoles Jonathan Carter of the Barbados Tridents after the match. Photograph: BCCI

Cape Cobras held their nerve at key moments to get the better of Barbados Tridents via the 'Super Over' in the Champions League T20 match in Mohali on Friday to keep their slender hopes of qualifying for the semi-finals alive.

Chasing a fighting target of 175, Cobras started in whirlwind fashion but lost momentum before scrambling up 174 for five to tie the scores. Jonathan Carter's brilliant unbeaten 111 for Tridents went in vain as the South African outfit came up trumps in a pulsating affair.

In the 'One-Over Eliminator' or 'Super Over', Cobras scored 11, with Dane Vilas hitting a boundary off Ravi Rampaul.

In reply, Tridents could only get 10, as offie Sybrand Engelbrecht bowled a tight last over, handing Cobras their first victory in the tournament.

Tridents could have won the match as Cobras required three runs off the final delivery, bowled by Ryad Emrit with Engelbrecht at the crease. But Englebrecht couldn't time his pull-shot cleanly and along with partner Justin Kemp set off for an improbable two.

Raymon Reifer threw from the deep and wicketkeeper Shane Dowrich made a mess trying to gather the ball as Engelbrecht made a desperate dive to save the situation.

Cobras had started with bang as burly opener Richard Levi smashed 39 off 18 balls, including three sixes and four boundaries, as the South African outfit put up 50 inside four overs.

However, once Levi was gone, Cobras got into a shell, unable to force the pace. And when Amla too departed in the 15th over, Tridents had the upperhand. But Engelbrecht and Kemp added 31 in last three overs to take the issue to the Super Over.

Engelbercht deservedly won 'man-of-the-match' award for his impressive show with bat and ball under pressure situation. 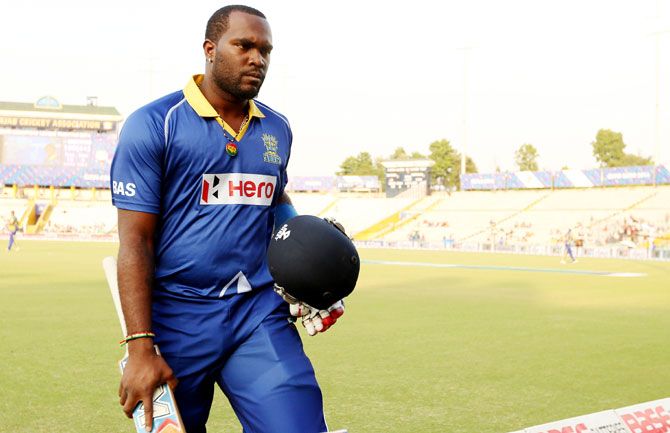 Jonathan Carter walks back after scoring a century. Photograph: BCCI

Earlier, Barbados Tridents overcame early jitters as Carter posted a brilliant unbeaten century to steer his team to 174 for eight after being put into bat.

Carter anchored the Tridents' innings with a well-crafted 111 not out off just 68 balls that consisted of 10 boundaries and five sixes, while opener Dilshan Munaweera (42) was the second highest scorer.

It was all credit to the West Indian, who almost single-handedly took the team past 170-run mark, even as only three batsmen in the side could reach double digits.

batsman Raymon Reifer (1) got out cheaply.

The combo of Carter and Munaweera consolidated the innings, putting on a solid 75 runs together for the third wicket to bring Tridents back on track.

Dropping Carter at 26 proved costly for the Cobras, as he stole two fours and a six in that very over off Justin Kemp.

However, it was an unfortunate end to Munaweera's knock that came off 21 balls, studded with five fours and two sixes, as the Sri Lankan batsman was run-out.

Carter, however, stuck to his guns at one end, although his new partners in James Franklin (3), Jeevan Mendis (10), Jason Holder (0), Ashley Nurse (0) and Akeal Hosein (6) were back to the dressing room in quick succession.

Carter alone went on doing his job to perfection even as wickets kept falling at the other end. The left-handed batsman kept hitting every loose balls to maintain a high run-rate.

For Cobras, Sybrand Engelbrecht (2/24) and Charl Langeveldt (2/29) finished with two wickets each. 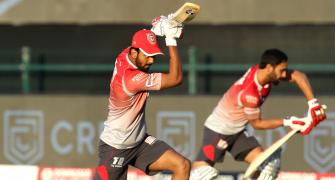