News
Business
Movies
Sports
Cricket
Get Ahead
Money Tips
Shopping
Sign in  |  Create a Rediffmail account
Rediff.com  » Cricket » Chennai Test: India one up against the Aussies

Another standout performance by the spinners, led by home favourite Ravichandran Ashwin, helped India register an empathic eight-wicket win over Australia in the opening match of the four-Test series at the MA Chidambaram stadium on Tuesday.

Having conceded a vital first innings lead to the hosts, thanks to a belligerent 224 by captain MS Dhoni, the visitors witnessed a batting collapse in the second innings in the face of continuous assault by the Indian spinners, on a wicket that had deteriorated even before the match had started. 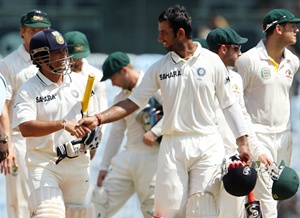 Needing 193 runs to make India bat again, Australia faced the prospects of an innings defeat before a dogged last wicket stand of 66, between Moises Henriques and Nathan Lyon, not ensured India batted for a second time but also took it to a fifth day.

However, it took only 22 minutes to end the Australian resistance on the fifth morning, Ravindra Jadeja having Lyon caught by Murali Vijay at short leg. Lyon had survived for 77 balls for his 11.

Debutant Henriques remained unbeaten on 81, to go with his 68 in the first essay. A memorable start in every way and one of the few positives Australia could take from this game.

Australia were bowled out for 241 (93 overs) in their second innings, adding nine runs in an equal number of overs on the fifth morning.

Ashwin had figures of five for 95 in the Australian second innings to finish with match figures of 12 for 198 on his home debut. Ravindra Jadeja took three for 72.

Forced to bat a second time, but needing just 50 runs to seal a win, Vijay’s flat six off Lyon in the second over indicated the obvious. The home team didn’t want to spend more time on the ground and finish off things early.

However, it wasn’t a smooth ride. James Pattinson, the lone Australian bowler to have impressed in the first innings, struck in his second over, having Vijay (6) caught by Henriques at mid-off.

A surprise selection, considering he had a forgettable domestic season, Vijay was selected ahead of a prolific Wasim Jaffer for this series, and given prominence over Shikhar Dhawan for this match.

The 28-year-old suffered a dual failure, on what was his home ground, thereby raising a few questions regarding the credibility of the selectors.

Virender Sehwag (19) hit three well-timed boundaries in his 23-ball innings but lost his wicket while defending a spinner, Lyon getting him edge to Michael Clarke at first slip.

Sachin Tendulkar (13 not out) started with successive sixes off Lyon, both over long-on, the hits taking India to 49 and Cheteshwar Pujara’s (eight not out) single off the spinner completed the win in the 12th over.

It was India’s fourth straight Test match win over Australia on Indian soil -- after wins in Nagpur in 2008 and Mohali and Bangalore in 2010 -- and sixth in the last eight matches. The visitors haven’t won in India since the third Test of the 2004 series in Nagpur, a series that they won.

The win was MS Dhoni’s 21st, tying him with Sourav Ganguly as the Indian captains with most Test wins. 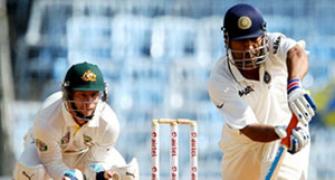 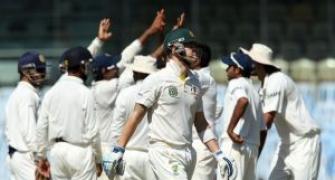 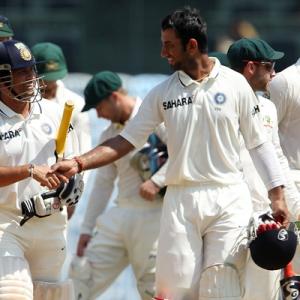 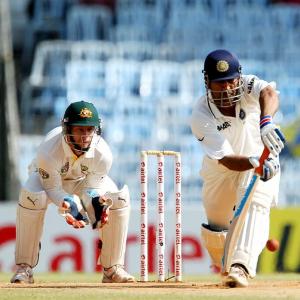