Shakib Al Hasan and Shahriar Nafees shared a record 180-run stand to take Bangladesh to a respectable 234-5 against Pakistan before bad light ended the opening day's play of the second Test on Saturday.

The pair surpassed Bangladesh's previous highest fifth-wicket stand of 144, set by Mehrab Hossain Jnr and Mushfiqur Rahim against New Zealand in 2008, to steer the team away from early trouble after a strong opening spell from Pakistan's Aizaz Cheemer 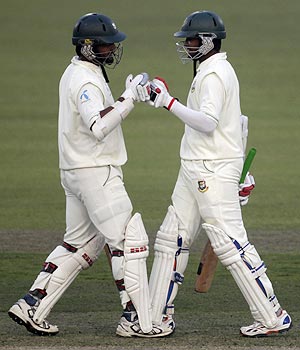 The stand was also Bangladesh's highest against Pakistan besting the 167 of Javed Omar and Habibul Bashar in 2003.

Shakib was unbeaten on 108, for his second Test century while Nafees fell to an awkward bouncer off Umar Gul on 97.

Wicketkeeper Adnan Akmal took a simple catch after the ball hit Nafees on the glove, ending his solid 177-ball innings that featured 12 boundaries.

Seamer Cheema had taken advantage of the bowler friendly conditions to claim three wickets and help reduce Bangladesh to 43-4 after play had been delayed by more than an hour because of dense fog.

The 32-year-old medium-pacer claimed had opener Nazimuddin (0) out leg before wicket with only his sixth delivery.

Gul then removed the under-performing Tamim Iqbal (14) when the Bangladesh opener's attempted hook shot was caught by Cheema at backward fine leg.

Cheema returned to bowl out Mahmudullah for a first-ball duck to leave the home side, who need to win the match to level the series after an innings defeat in the first Test, struggling on 21-3.

Nasir Hossain (7) was next to go in the 14th over when he edged a simple catch to wicketkeeper Adnan Akmal off the bowling of Cheema.

© Copyright 2022 Reuters Limited. All rights reserved. Republication or redistribution of Reuters content, including by framing or similar means, is expressly prohibited without the prior written consent of Reuters. Reuters shall not be liable for any errors or delays in the content, or for any actions taken in reliance thereon.
Related News: Cheema, Shakib Al Hasan, Adnan Akmal, Shahriar Nafees, Mushfiqur Rahim
COMMENT
Print this article
HC rejects bail plea of Hasan Ali aide Tapuriah Akmal, Misbah guide Pakistan to 4-1 series win
Azam Cheema may not be involved in 26/11 attacks