'He is great to have as a captain -- he just keeps everything simple and doesn’t change his emotions too much, which in the heat of the battle, (helps) to keep your mind clear' IMAGE: Along with the England management Eoin Morgan took a year to gather ideas and concentrate his thoughts into a plan for the team, with clear demands for the players and an approach to the game based on attacking cricket. Photograph: ICC/Twitter

England's run to their first World Cup final in 27 years owes much to the leadership of Eoin Morgan, the quietly-spoken Irishman who could achieve on Sunday what no England skipper has ever managed.

England completed a stunning victory over Australia on Thursday to set up a decider against 2015 runners-up New Zealand at Lord's.

A first World Cup triumph for England, just four years after one of their worst displays in the competition, would be one of the most remarkable turnarounds in English sport.

Former England captain Michael Vaughan has no doubt about Morgan's role in transforming the team from a laughing stock into one that could deliver such a complete performance in the eight-wicket thrashing of Australia.

"The reason why England’s one-day cricket has been revolutionised is down to Morgan," the Yorkshireman said.

Chris Woakes, whose fine spell of three wickets for 20 runs, helped bowl out Australia for 223, agrees that the 32-year-old's leadership has been central to the way England have coped with the pressure and expectation of being a host nation.

"Eoin is cool as ice with everything he does," Woakes said.

"He is great to have as a captain -- he just keeps everything simple and doesn’t change his emotions too much, which in the heat of the battle, (helps) to keep your mind clear," he added.

"He has led from the front in terms of the way the batsmen have played. They take the attack to the bowlers, they never sit off. He has decided that was the way this team should play. Everyone speaks about Morgs in the same fashion. He is a great bloke off the field and the same on it."

In the 2015 World Cup in Australia and New Zealand, England did not reach the knockouts, winning only two of their six group games and losing to Bangladesh.

Morgan consulted with leadership experts at the beginning of the four-year cycle, including England's own team psychologist David Young.

Along with the England management he took a year to gather ideas and concentrate his thoughts into a plan for the team, with clear demands for the players and an approach to the game based on attacking cricket.

Then England team director Andrew Strauss backed Morgan and his plan and could not hide his delight as he watched the win over Australia.

"I've found myself getting quite emotional watching it because all we wanted four years ago was for England to go out and play in a different style, a different brand of cricket," he told Sky Sports.

"We didn't know where it was going to lead us but we thought it was England's best chance of winning a World Cup and they've proved us right so far."

It was noticeable that in the immediate aftermath of the win over Australia at Edgbaston, Morgan, who had struck the winning runs and ended unbeaten on 45, was quick to acknowledge the role that his backroom staff had played.

"Yes, it's been a process for the last four years. In 2015 we were way off the mark, we struggled against the top teams, and the teams that sat below that, so there was quite a drastic change in the way we played and the way we looked at playing our 50-over cricket.

"That has worked out extremely well for us and given the support that we've had throughout, the ECB (England and Wales Cricket Board), the backroom staff, as players we have taken that as far as we can so far."

Now comes the biggest test, against a New Zealand team that were so impressive in their semi-final win over India.

The key to victory, says Morgan, is for England to maintain the same positive approach and not let the occasion at Lord's impact on their decision-making.

"Sunday is not a day to shy away from, it's a day to look forward to, much like today," he said.

"It will be a matter of the same again trying to produce everything that we can performance-wise but -- enjoy the day."

© Copyright 2020 Reuters Limited. All rights reserved. Republication or redistribution of Reuters content, including by framing or similar means, is expressly prohibited without the prior written consent of Reuters. Reuters shall not be liable for any errors or delays in the content, or for any actions taken in reliance thereon.
Related News: Eoin Morgan, England, Australia, New Zealand, Chris Woakes
SHARE THIS STORYCOMMENT
Print this article 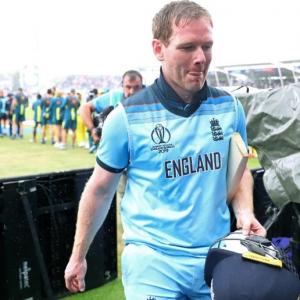