Dean Brownlie pulled New Zealand 'A' out of troubled waters with a fighting century as India 'A' lost their stranglehold over the hosts at stumps on the third and penultimate day of the second unofficial Test in Lincoln.

Resuming the day at a precarious 198 for five in reply to India's mammoth 554 for eight declared, Brownlie (106) stitched two century partnerships -- first with Luke Woodcock and then Sam Wells -- to save the Kiwis from humiliation.

Brownlie first shared a vital 107-run sixth-wicket stand with Woodcock (58) to help New Zealand 'A' avoid the follow-on, and then joined hands with Sam Wells for a 110-run seventh-wicket partnership to take their score to respectability.

While Brownlie played the second fiddle during the partnership with Woodcock, the latter took the attack to the opposition, smashing 11 boundaries during his 70-ball knock.

Brownlie hit some glorious shots during his 106-run knock, which was studded with 16 fours.

After Woodcock's dismissal, Brownlie found another able partner in Wells (69), who struck six fours and three six during 90-ball innings.

New Zealand 'A' declared their innings on 424 for seven, 130 runs behind India's first innings total, after Brownlie's dismissal, caught by skipper Abhinav Mukund off Suryakumar Yadav.

For India 'A' Bhuvneshwar Kumar was pick of the bowlers with figures of three for 94, while medium pacer R Vinay Kumar picked up two wickets for 83 runs.

India 'A' managed 119 for the loss of two wickets, an overall lead of 249 runs, when stumps were drawn.

Unmukt (44) fell just six runs short of his half-century, while coming in at number three, Naman Ojha managed just eight before he was caught by Hamish Rutherford off leg-spinner Tarun Nethula.

At the close of play, Mukund was batting on 56 and giving him company was Anustup Majumdar on eight.

The first Test between the two teams ended in a draw. 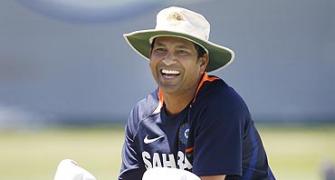 India A settle for draw against Kiwis