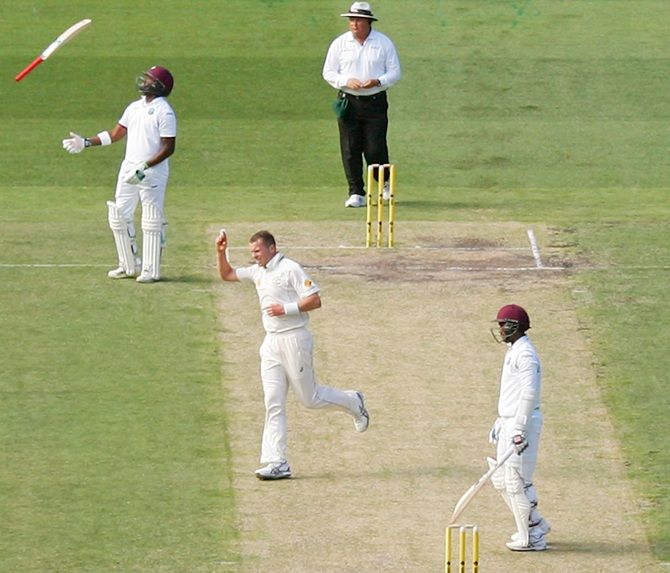 The West Indies batsmen crumbled late on Sunday to leave their team teetering at 91-6 and staring at another humiliating defeat at the close of day two of the second Test against Australia.

The dramatic collapse in the final session left the tourists 261 runs short of making the hosts bat again and came after centuries to Australia captain Steven Smith and Adam Voges drove the hosts to a mammoth first innings declaration at 551-3.

Darren Bravo was 13 not out, with debutant paceman Carlos Brathwaite on three, and their team in absolute disarray.

Openers Kraigg Brathwaite and Rajendra Chandrika had negotiated a nervous hour to tea but their hard work was undone straight after the break by Lyon. 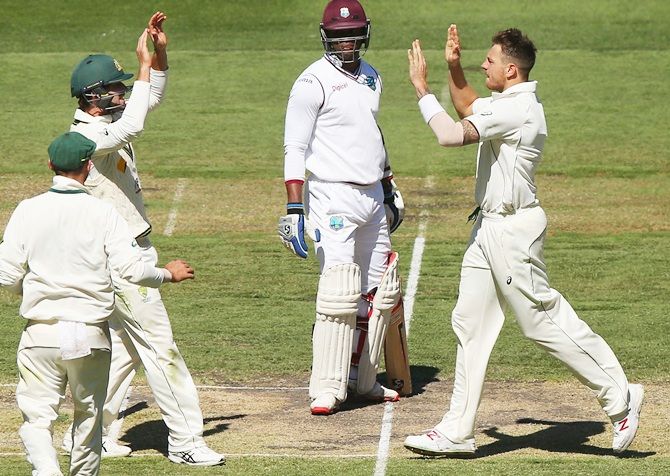 In his first ball of the session, the offspinner dismissed Brathwaite for 17, the Barbadian prodding a straightforward catch to Joe Burns at short leg.

Chandrika held on for another half-hour but was out lbw for 25 off Pattinson after failing to play a shot.

Pattinson needed only three more deliveries before grabbing his second wicket when Marlon Samuels was trapped lbw for a duck.

Jermaine Blackwood survived a contentious review decision after spooning a shot to Burns who claimed a low catch at short leg when on 18.

Umpire Marais Erasmus called on the TV replay for guidance and third umpire Ian Gould issued a not out decision to the howling derision of fans.

Jamaican Blackwood then skipped down the wicket at Lyon to hoist him over the fence for six but was caught and bowled by the spinner four balls later after attempting the same gambit.

Denied by Gould, Burns hit back to secure the fifth wicket for Peter Siddle, leaping to his right to catch wicketkeeper Denesh Ramdin for a duck.

Siddle bowled Jason Holder for a third duck next ball but was denied a second career hat-trick by a straight bat from Brathwaite.

West Indies had managed to prise only three wickets from nearly five sessions of cricket, but Australia's bowlers managed six in the final two hours.

Smith, the ICC Cricketer of the Year, earlier raised his 13th Test century and walked off unbeaten on 134 after declaring before tea.

His untroubled 177-ball innings was his sixth Test ton for the year and put him on top of the leading run-scorers for 2015 ahead of England skipper Alastair Cook.

Voges was also unbeaten, his 106 off 166 balls the Western Australian's fourth Test century since his debut at the age of 35 against the same opponents on tour in Roseau.

© Copyright 2022 Reuters Limited. All rights reserved. Republication or redistribution of Reuters content, including by framing or similar means, is expressly prohibited without the prior written consent of Reuters. Reuters shall not be liable for any errors or delays in the content, or for any actions taken in reliance thereon.
Related News: Nathan Lyon, Carlos Brathwaite, Peter Siddle, James Pattinson, Darren Bravo
COMMENT
Print this article 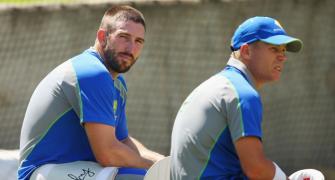 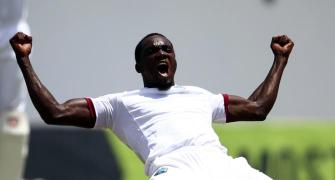 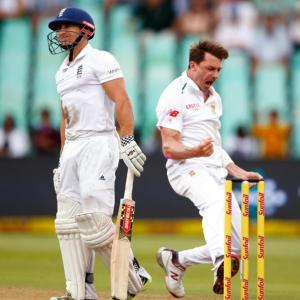 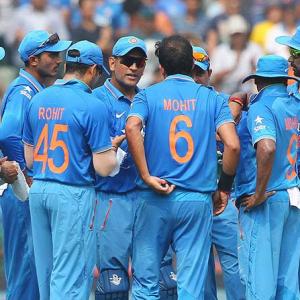