Alleged bookie Mazhar Majeed's links with the Pakistan cricket team seem to run quite deep as his brother Azhar had also acted as an agent for many former and current cricketers of the country.

Mazhar, an agent for some members of the Pakistan team, had claimed in a British tabloid's sting operation that he paid bribes to the suspended trio of Test captain Salman Butt and pacers, Mohammad Asif and Muhammad Amir to involve themselves ion spot-fixing in the Lord's Test against England.

Scotland Yard, which is investigating the allegations, on Friday submitted its initial report based on evidence against the three players to the Crown Prosecutors Office.

Now it has emerged that Mazhar's elder brother Azhar was also once an agent for many leading Pakistani players among them Shahid Afridi, Mohammad Yousuf, Abdul Razzaq and Saqlain Mushtaq.

"Azhar has also been investigated by Scotland Yard but they didn't charge him on any count and he is said to have told them he is not on talking terms with his brother and didn't know anything about his bookmaking business," one source said.

Former Pakistan off-spinner Saqlain Mushtaq, who is in Lahore on holidays these days from England, also confirmed Azhar had once been his agent.

"But I have never had anything to do with Mazhar Majeed. Azhar represented me and got me contracts with Sussex and Surrey. But I never heard anything wrong about him," Saqlain said.

The off-spinner, who finished a 12-month coaching contract with New Zealand cricket, also made it clear that he felt the spot-fixing controversy had badly damaged Pakistan cricket.

"If these players are indeed found guilty, punish them, but before that I think the media and former players should also be careful with what they report or say on this issue as it is Pakistan's image which is getting damaged," Saqlain said.

He also felt that the controversies that usually surround the Pakistan team are to blame for the team's poor performances in Australia and England.

"The circumstances that the team finds itself in are not good and in these conditions it is very difficult to obtain the on-field results that you want," he said. 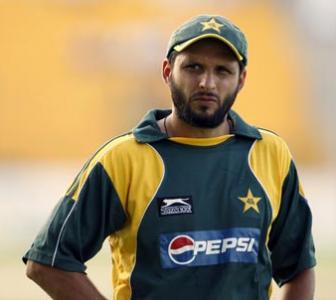 Majeed couldn't trap Afridi in his 'fixing' net
Pakistan to deliver their best against Eng: Waqar

Uncovered: Who is Mazhar Majeed