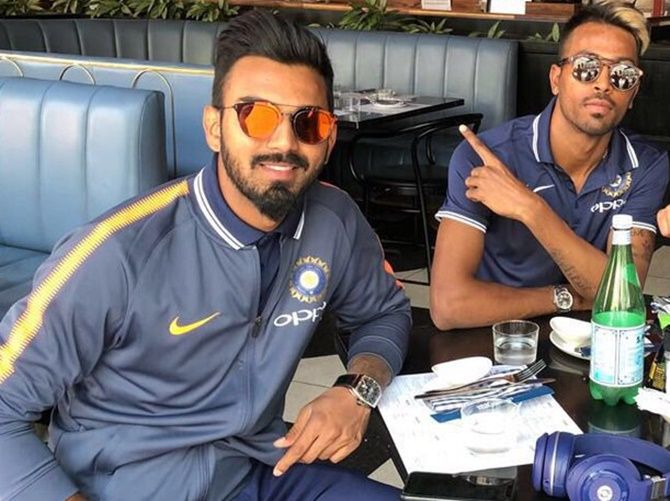 IMAGE: Pandya and Rahul were suspended by the BCCI and sent home from the tour of Australia following their sexist remarks. Photograph: KL Rahul/Twitter

The suspensions on Indian cricketers Hardik Pandya and K L Rahul were, on Thursday, lifted by the Committee of Administrators (CoA), two weeks after they were sent home from the tour of Australia due to their sexist comments on a TV show.

The 25-year-old Pandya is expected to take the earliest available flight to join the team in New Zealand for an ongoing limited-overs series, while Rahul might play in either the domestic circuit or show up for India A in the home series against England Lions, a Board of Control for Cricket in India source told said.

"The above matter and decision has been taken with the concurrence of the Learned Amicus Curiae, Mr. P.S. Narasimha. In view of the above, the suspension orders dated 11.01.2019 is immediately lifted pending appointment and adjudication of the allegations by the BCCI Ombudsman," read a statement from the CoA, issued by the BCCI.

However, an inquiry will take place into the matter, for which an ombudsman is to be appointed by the Supreme Court. The apex court has listed the matter tentatively for February 5.

In case Karnataka make it to the Ranji Trophy finals, the 26-year-old Rahul is now expected to open the innings with Mayank Agarwal.

Pandya and Rahul's crass comments on the show 'Koffee With Karan', where they spoke about hooking up with multiple women, were criticised by one and all and led to a social media storm.

While Diana Edulji wanted the BCCI office-bearers to be involved in deciding the fate of the two cricketers, CoA chief Vinod Rai had dismissed the suggestion as it would have been in violation of the Board constitution.

The CoA said the decision to suspend the two was taken under "Rule 46 of the approved BCCI Constitution", which covers players' conduct that can bring the Board into disrepute.

The idea of letting the players get on with the game was first mooted by BCCI acting president CK Khanna, who wanted the suspensions to be lifted pending inquiry.

In fact, Khanna refused to convene a Special General Meeting (SGM), which was the demand of at least 14 affiliated units. Most of these officials have allegiance to former board president N Srinivasan.

"I did not wish this issue to turn into an administrative mess. For me, it was paramount that Hardik and Rahul return to action and inquiry can also simultaneously continue. If Ben Stokes could continue playing while the court case was on, why can't that be applicable for Pandya and Rahul," Khanna said referring to the England all-rounder's role in a much-publicised brawl outside a pub.

"I did not convene the SGM as it was against the laws stated in the BCCI constitution. Hardik and Rahul have been punished enough and they will emerge as better human beings. For now, the focus should be on winning World Cup where Hardik might play a massive part," the acting president said.

The World Cup is scheduled to be held from May 30 in England.

Rai had initially sought a two-match ban on the duo but that suggestion was shot down by Edulji, who sought legal opinion on the matter. The subsequent drama left the two cricketers in lurch and triggered a debate on whether they deserved to be punished so severely.

Former India captains like Rahul Dravid and Sourav Ganguly, in fact, went on record to say that 'it's time to move on' as both would have learnt from their mistakes.

The man who conducted the controversial interview, Karan Johar, too pleaded for a closure.

"I feel very responsible because it was my show, it was my platform. I have had so many so many sleepless nights just wondering about how I can undo this damage, who is gonna listen to me," he had told 'ET Now'.

The COA has also decided to introduce a behavioural counselling programme for all representative national teams. Pandya and Rahul are expected to attend these classes with the senior team which will also have sessions on gender sensitisation.

Source: PTI© Copyright 2021 PTI. All rights reserved. Republication or redistribution of PTI content, including by framing or similar means, is expressly prohibited without the prior written consent.
Related News: Hardik Pandya, Board of Control for Cricket in India, Rahul Dravid, SGM, CoA
SHARE THIS STORYCOMMENT
Print this article 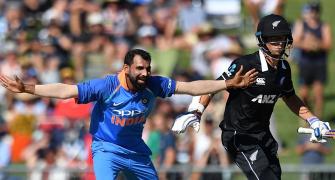 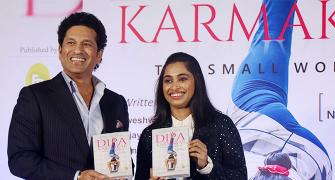 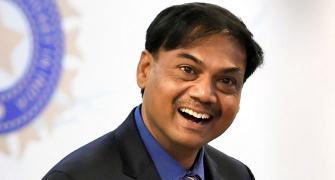