The Board of Control for Cricket in India's technical committee, headed by former India captain Sourav Ganguly, has called for a major revamp of the Ranji Trophy, recommending doing away with of the earlier Elite and Plate divisions and making it a 27-team tournament.

The committee, which met in Mumbai on Tuesday for over two hours, recommended an overhaul of the elite domestic event, which has been struggling for relevance.

The BCCI's Working Committee will study the recommendations and decide whether to implement them or not.

According to the new format, 27 teams will be divided into three groups of nine each; each will play eight matches in the league stage. The quarter-finals and semi-finals, like the final, will also be five-day affairs.

"We have recommended two major changes in the Ranji Trophy format. There will be nine teams in three groups -- A, B and C. Each team will play eight matches in the league stage and there will be promotion and relegation," Ganguly told reporters after the meeting.

"The changes will make the competition even and each team will play a few more matches. But all these are recommendations and the BCCI Working Committee will take the final decision," he added.

The new format brings parity in the number of matches that the teams will play against each other in the league stage.

Earlier, in the Plate division, a side could play five matches at the preliminary level.

The top three from Group B at the end of the season will be promoted to Group A, while the bottom three from the latter group will be relegated to Group B.

Meanwhile, the committee decided against making any changes to the format of the Duleep Trophy, scheduled for October instead of February.

Suggestions varying from home-and-away ties, playing on uncovered wickets to widening the gap between two games and a league format for the Duleep Trophy, were given at the annual Ranji Trophy captains' and coaches' conclave organised by the BCCI in March.

If in the Ranji Trophy knock-out phase a result on first innings is not obtained at the end of the fifth day, then the match will be extended into a sixth day.

If a result on the first innings is not obtained even at the end of the sixth day, then the winner will be decided by the spin of a coin.

The Ranji Trophy points system is a follows: an outright win win give the team six points while both teams will get three points each in case of a tie on both innings. If a team wins by an innings or by 10 wickets, it will get one bonus point.

If the innings results are not achieved with or without weather interference, one point will be awarded to each team.

According to another recommendation of the Technical Committee, each Under-22 side will now be called the 'A' team of that association. Players who are below 25 years of age, as on September 1 of that year in which the season starts, will be eligible to be a part of the team.

Every team will be allowed to field three Ranji Trophy players (those who have figured in the playing eleven in the Ranji Trophy in the ongoing season or immediate preceding season) in each game.

In Under-16 tournaments, all matches in the knock-out stage will be four-day affairs.

In September, Rajasthan, the Ranji champions of 2011-12, will play the Rest of India.

After the Ranji Trophy final in early 2013, the 2012-13 Ranji champions will play the Rest of India. 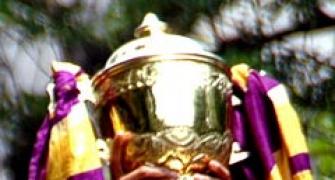 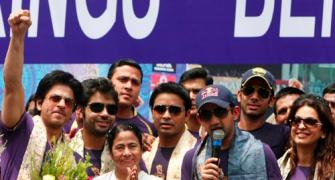