Bad patch happens to every player, Kohli will bounce back: Sehwag

'The hallmark of a good player is who can come out of bad form and Virat knows very well how to come back into good form.' 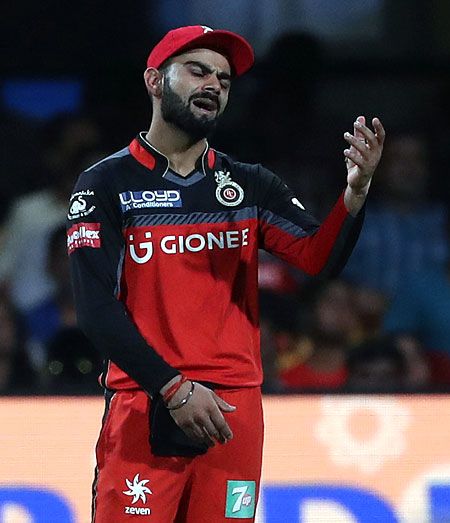 Unconcerned by the indifferent form exhibited recently by India captain Virat Kohli, former swashbuckling batsman Virender Sehwag said that a player of his calibre knows how to get out of the rut.

"It (bad patch) happens with every player. Even if you look at the great Sachin Tendulkar, he hasn't played the same (way) every year. Even your (media) questions keep changing time to time. When time changes, form also changes. The hallmark of a good player is who can come out of bad form and Virat knows very well how to come back into good form," Sehwag said in Mumbai on Friday.

Kohli, who has notched up 250 runs from nine games in the ongoing tenth edition of th Indian Premier League at a modest average of 27-plus with 64 being his highest score, will lead India in the ICC Champions Trophy tournament which is scheduled to start in England on June 1.

Sehwag does not agree with the view that the Indian players could be a bit jaded going into the 50-over Champions Trophy after taking part in the T20 League.

Sehwag, who is the mentor of Kings XI Punjab, believes that since his side's play-off chances in the IPL depends on other teams, it is crucial for them to maintain a good run-rate.

"Our qualification depends on other teams.  If (Rising) Pune (Supergiant) lose and (Sunrisers) Hyderabad lose, or KKR (Kolkata Knight Riders) lose then we have a chance to qualify. We have to maintain the run-rate and only then we can qualify," he said.

Kings XI, who defeated Mumbai Indians in a high-scoring thriller at the Wankhede Stadium on Thursday by seven runs to keep their qualification hopes alive, face Rising Supergiant in a must-win game in Pune on May 14.