Contrasting half-centuries from Mike Hussey and Glenn Maxwell led Australia to a series-winning three-wicket victory over Pakistan in the third and final One-day international in Sharjah on Tuesday.

Man-of-the-match Hussey used all his guile with clever reverse-sweeps and deflections as well as the odd lusty blow over midwicket to spearhead his side's pursuit of 245 for victory after Pakistan had made 244 for seven.

He did have a slice of luck when Pakistan chose not to review a leg before wicket appeal off the bowling of Saeed Ajmal before he had scored, but given that good fortune he went on to hit seven fours and a six in a 72-ball stay at the crease. 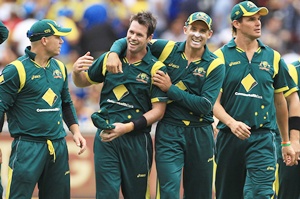 Although bowled by paceman Junaid Khan with 19 runs still required, his sixth-wicket partnership of 67 from just nine overs with Maxwell (56 not out) ensured Australia were well ahead of the required rate.

Maxwell, who faced only 38 balls and hit four fours and three sixes, was dropped on 34 on the deep midwicket boundary by Azhar Ali off the bowling of Junaid and went on to seal Australia's success with an on-driven six off the same bowler.

The defeat extended Pakistan's poor recent record in ODI series against Australia, having now gone 10 years since taking a 2-1 series win in Australia in 2002.

"It's a very special feeling and a very special win after our (4-0 series) defeat in England," Australia captain Michael Clarke said. "I've never played in heat or humidity like this and the series was won by the whole team.

"As a captain you always say it's important to have a blend of youth and experience and today we saw that as Mike Hussey continues to perform consistently while Glenn Maxwell played his natural game and showed no fear."

But temperatures never dipped below 30 degrees Celsius, even late at night, although that and the late hours of play did not seem to bother the crowds, who turned up in significant numbers to support the matches.

"We have to improve in every department," Pakistan captain Misbah-ul-Haq said, lamenting his team's third straight series loss. "We have to find ways of getting the right combination of fast bowlers and we have to improve our batting and fielding.

"At important stages we collapse and we mess up chances in fielding and we have to improve in those areas."

When Hussey and Maxwell came together at 159 for five in the 35th over following the dismissal of Matthew Wade (22) by left-arm spinner Abdur Rehman, Pakistan appeared to be moving into the ascendancy led by off-spinner Ajmal, whose first five overs brought him the remarkable figures of 3-11.

Australia's other top-order player to perish was opener Dave Warner (21) who, in contrast to his largely stroke-less innings earlier in the series, played with his characteristic aggression before lofting Abdur Rehman into the outfield.

Pakistan squandered a dream start by openers Mohammed Hafeez (78) and Nasir Jamshed (48), who added 129 for the first wicket from 27 overs. But when Jamshed fell, caught behind by Wade off Mitchell Johnson (2-33), the innings gradually lost momentum.

Shahid Afridi, fit again after missing the second match with a back injury, was pushed up to number three to try and build on that fine start but he made only seven before lofting Johnson to Maxwell at deep midwicket.

When Hafeez missed an attempted sweep at Clarke to fall lbw, Pakistan had lost 3-26 in six overs and although Asad Shafiq (27) and captain Misbah (25) tried to repair the damage, they were never able to break free.

Man-of-the-series Mitchell Starc (4-51) was once again the pick of Australia's attack, the left-arm fast bowler ending with a total of 13 wickets from four ODI matches against Afghanistan and Pakistan.

The sides will now face each other in three Twenty20 internationals in Dubai starting on Wednesday before heading to Sri Lanka.

© Copyright 2023 Reuters Limited. All rights reserved. Republication or redistribution of Reuters content, including by framing or similar means, is expressly prohibited without the prior written consent of Reuters. Reuters shall not be liable for any errors or delays in the content, or for any actions taken in reliance thereon.
Related News: Glenn Maxwell, ODI, Pakistan, Mike Hussey, Australia
COMMENT
Print this article
Australians 'clueless' on how to play Ajmal: Wasim Akram
US slaps sanctions on 8 LeT leaders including Sajid Mir
'Australia has the ability to take No.1 spot away from SA'