Images from Thursday's second ODI between India and Australia at the Eden Gardens, in Kolkata. IMAGE: Kuldeep Yadav celebrates his hat-trick wicket in the second ODI against Australia at the Eden Gardens, in Kolkata, on Thursday. Photograph: BCCI

Left-arm spinner Kuldeep Yadav became only the third Indian bowler to take a hat-trick as he helped the hosts demolish Australia by 50 runs in the second One-Day International, in Kolkata, on Thursday.

Chasing 253 on a tricky surface, Australia again had no answers to the guile of wrist spinners Yuzvendra Chahal (2/34) and Chinaman Yadav (3/54), who struck at crucial junctures to bundle out the opposition for 202 in 43.1 overs.

With Thursday's memorable feat, Yadav joined Kapil Dev (1991) and Chetan Sharma (1987) in a select club of Indians who have registered a hat-trick.

The victory was also India's eighth in a row in ODIs and they now top the ICC ODI rankings, albeit temporarily.

India's sensational bowling performance came after captain Virat Kohli scored a fluent 92 to take the hosts to 252, with opener Ajinkya Rahane scoring 55 at the top of the order. IMAGE: Mahendra Singh Dhoni removes the bails and uproots the stumps to have Glenn Maxwell run out. Photograph: BCCI

Australia, having surrendered to the Indian spinners meekly in the first ODI in Chennai, seemed equally helpless at the Eden Gardens as seven batsmen registered single digit scores.

Every time they tried to find their way back into the game, the Indian spinners responded with a breakthrough, carrying on from the good work done by pacer Bhuvneshwar Kumar (3/9) in the early overs.

Kumar made the ball talk in his opening spell, removing the dangerous David Warner and Hilton Cartwright to leave the Australians reeling at nine for two.

Steven Smith (59) and Travis Head (39) got together to resurrect the innings in a 76-run stand. However, the left-hander flicked a full toss straight to mid-wicket and became Chahal's first scalp and Australia found themselves under pressure again.

Glenn Maxwell (14) came out to support his captain and looked ominous straightaway, sweeping Yadav for two sixes in an over. But he too did not last long when his team needed another solid partnership. All Australian hopes disappeared with the fall of Smith, who was caught by the deep square leg fielder off a Pandya bouncer.

Then Yadav joined the party by sending back Matthew Wade, Ashton Agar and Pat Cummins in as many balls to send the Eden crowd into a frenzy.

His best ball, without doubt, was the hat-trick delivery. The young spinner showed remarkable calm to bowl the wrong one that took a thick edge of Cummins's bat before landing into the hands of Dhoni.

Yadav got through Wade's stumps before trapping Agar in front to be on a hat-trick.

Stoinis waged a lone battle for Australia towards the end with an unbeaten 62 of 65 balls. 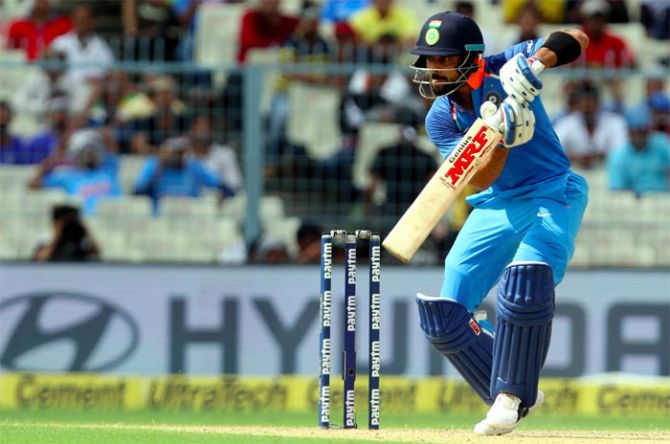 IMAGE: India captain Virat Kohli displayed sublime touch before falling for 92 and missing out on a 31st ODI century in the second ODI against Australia in Kolkata on Thursday. Photograph: BCCI/Twitter.

Earlier, Kohli and Rahane struck sublime half-centuries before Australia staged a strong fightback to bowl India out for 252.

Coming in to bat after the early dismissal of Rohit Sharma, Kohli (92) looked in great touch and along with Rahane (55) shared 102 runs off just 111 deliveries for the second wicket to set the base for the total.

Kohli’s 107-ball knock was studded with eight boundaries, while Rahane hit seven during his 64-ball innings.

As long as Kohli and Rahane were at the crease India were on course for a big score, but the latter's dismissal in the 24th over opened the gates for Australia.

The visitors forged a brilliant fightback through medium pacers Nathan Coulter-Nile (3/51) and Kane Richardson (3/55) who shared the spoils on a slow Eden Gardens wicket.

Pacer Pat Cummins (1/34) and left-arm spinner Ashton Agar (1/54) also picked up a wicket each for Australia. 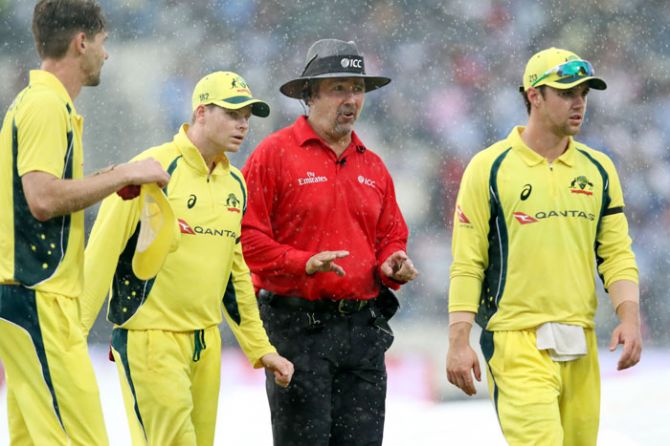 Included in place of James Faulkner, Richardson picked the key wickets of last match heroes Mahendra Singh Dhoni (5)and Hardik Pandya (20) as India were bowled out off the last ball of the innings after being comfortably placed at 186 for three in 35 overs.

Despite Rahane's run-out, Kohli was in full flow. He and Kedar Jadhav, who scored a run-a-ball 24, added 55 runs for the fourth wicket.

However, Coulter-Nile's twin strikes (Jadhav and Kohli) in successive overs titled the balance Australia’s way, as thereafter India seemed to have lost the plot.

Kohli played on and was denied his 31st ODI century, while Jadhav, while attempting a cut, was caught by Glenn Maxwell.

With 15 balls remaining in the innings, a passing shower held up the game for 18 minutes with India placed at 236 for 7.

There was also an injury scare for Pandya, who was hit hard on the grill of his helmet by a shot from Bhuvneshwar Kumar. Such was the impact that Pandya lay on the ground as the Aussies also rushed on to him. 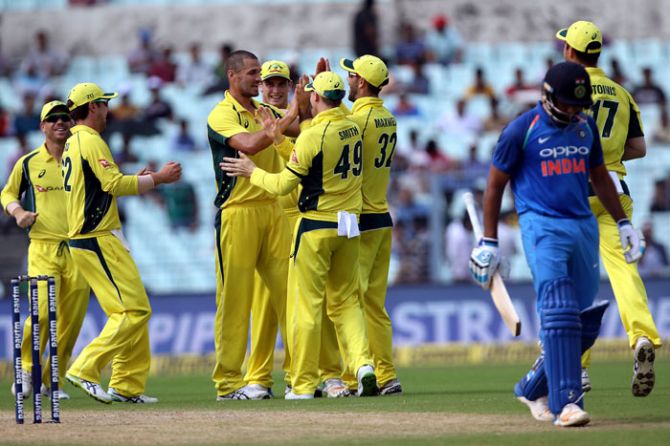 Earlier, India did not have the best of starts as Rohit, whose career-best scores in the all the three formats have come at the venue, had a rare blip at Eden Gardens, falling for seven. He mistimed Coulter-Nile for a return catch.

But the breakthrough in the sixth over hardly had any impact on India's scheme of things as Rahane and Kohli went about their business in style.

The duo played fluently as India reached the 100-run mark in 19.5 overs.

Smith tried out different things but nothing went Australia's way, till suddenly a run-out came to their rescue.

Going for a second run, Rahane was caught short of the crease by Hilton Cartwright.

Manish Pandey (3) continued his lean patch and was out in the space of 21 balls, becoming Coulter-Nile's second victim.

But Kohli was in his elements as he neared his 31st ODI century and India were on course for a 300-plus total with 15 overs to go before Australia slowly clawed back into the game. 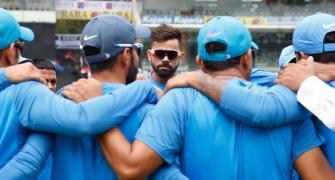 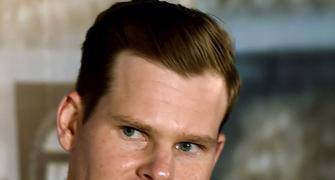 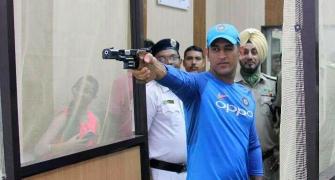 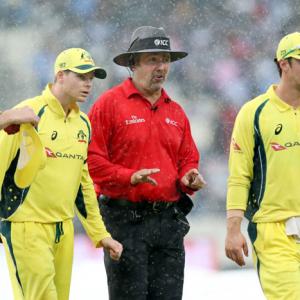 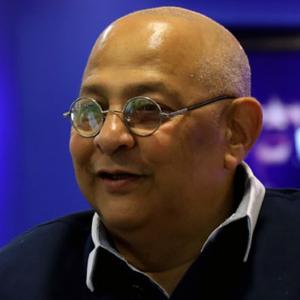