England battling to save Perth Test and keep series alive A dominant Australia were five wickets away from reclaiming the Ashes after hammering England with the bat and reducing them to 251 for five with the ball at the end of the fourth day of the third Test at the WACA on Monday.

Ben Stokes, who scored his maiden Test half-century and was 72 not out, and Matt Prior, unbeaten on seven, were at the crease, but the tourists were still 252 runs behind and will need to bat through the final day to save the Test and keep the series alive.

Shane Watson earlier smashed 73 runs off 40 balls for a spectacular century and George Bailey equalled the Test record for most runs from a single over before Australia declared at 369 for three some 40 minutes before lunch.

Requiring 504 runs for an unlikely victory, England's worst Test session for a long time had not quite reached its nadir and Ryan Harris sensationally bowled Alastair Cook for a golden duck with the first ball of the innings.

After lunch, Michael Carberry made 31 before being adjudged lbw off the bowling of Watson, while Joe Root scored 19 before he was brilliantly caught behind by Brad Haddin off Mitchell Johnson.

Kevin Pietersen was well set on 45 when, in a move unlikely to appease his critics, he strode down the wicket to take on spinner Nathan Lyon, sending the ball high into the sky but failing to clear Harris at the long-on boundary.

Ian Bell put on 99 runs with Stokes for the fifth wicket before an Australian challenge overturned a not out verdict when the TV umpire determined his attempted uppercut had nicked a Peter Siddle delivery to Haddin for 60.

It was the morning of intense drama and some high farce, though, that put Australia on firmly track for a victory that would give them an unassailable 3-0 series lead and ensure the return of the urn.

The hosts resumed 369 runs ahead at 235 for three and Watson, who started the day on 29, signalled his team's intent with two fours and a six off the first over from spinner Graeme Swann.

Watson has struggled to convert 50s into centuries but there seemed little doubt he would do so on Monday as three sixes and a four off another Swann over took him from 60 to 82.

England were left cursing their luck when Tim Bresnan caught Watson on 90 only to tumble over the boundary rope and the Australian soon captured his fourth test century with a clipped four to fine leg.

Watson's departure for 103 was as remarkable as his sparkling innings, which included 11 fours and the five bludgeoned sixes.

Bell waited for an age for a skied ball to come down only to drop it but Watson, not expecting the error, had stopped running and a quick-witted Bresnan ran him out at the non-striker's end.

Despite a string of dropped catches and some schoolboy fielding, England did manage to dismiss Steve Smith (15) and Haddin (five) but Bailey continued to punish the bowling.

When he blasted a record-equalling 28 off six James Anderson deliveries to reach 39 not out and take Australia's lead past the 500-mark, captain Michael Clarke called his players in.

The punishment was not over for England, though, and Harris produced a peach of a ball to remove Cook's off bail, the first time the England captain had been dismissed by the first ball he faced in his 100 tests.

There was some good news for England when scans confirmed that Stuart Broad had not broken a bone in his foot, although his movement was restricted when he had a bat in the nets.

Image: Australia's Peter Siddle celebrates after taking the wicket of Ian Bell during Day 4 of the third Ashes Test at the WACA in Perth.

© Copyright 2021 Reuters Limited. All rights reserved. Republication or redistribution of Reuters content, including by framing or similar means, is expressly prohibited without the prior written consent of Reuters. Reuters shall not be liable for any errors or delays in the content, or for any actions taken in reliance thereon.
Related News: Shane Watson, Brad Haddin, England, WACA, George Bailey
COMMENT
Print this article 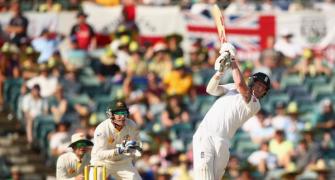 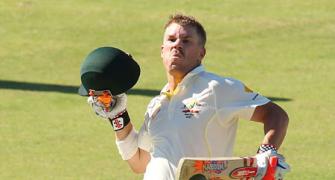 Ashes PHOTOS: Australia in command at WACA, close in on the urn 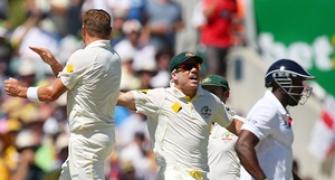 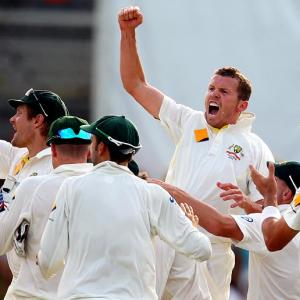 Ashes PHOTOS: Watson shines as Australia close in on victory in Perth