News
Business
Movies
Sports
Cricket
Get Ahead
Money Tips
Shopping
Sign in  |  Create a Rediffmail account
Rediff.com  » Cricket » There should be full transparency in the BCCI's actions: Justice Lodha

'We found that the time has come that the BCCI should be run professionally, it should not have any monopoly of a family or of an individual. There should be full transparency in its action, the office bearers must be accountable and there should be good governance and the day to day management should be in the hands of professionals and that has been accepted by the Supreme Court.'

It has turned out to be a red letter day for Indian cricket as the Supreme Court in a landmark judgement on Monday removed both the Board Of Control for Cricket in India president Anurag Thakur and secretary Ajay Shirke for not complying with its order on implementing reforms.

The reforms in the BCCI were suggested by the Supreme Court appointed Justice Lodha panel comprising of former chief justice of India Rajendra Mal Lodha, along with retired judges Ashok Bhan and R Raveendran, who were appointed in January 2015 after the ‘Conflict of Interest’ issue sparked a major controversy in Indian cricket.

The Lodha Committee had on January 4 recommended sweeping reforms and an administrative shake-up in the troubled BCCI, majority of which were accepted by the Supreme Court in July last year.

However, despite the Supreme Court accepting the recommendations on July 18 last year, the BCCI failed to fall in line and opposed the reforms which eventually resulted in the apex court sacking the top two officials of the board.

Justice Rajendra Mal Lodha spoke to Rediff.com’s Harish Kotian and explained what forced the Supreme Court to sack both Thakur and Shirke and the way forward for Indian cricket.

Firstly, your reaction on the Supreme Court verdict dismissing both BCCI president Anurag Thakur and secretary Ajay Shirke. What do you think has forced the apex court to take such a stern action?

Today’s order is sequated to the order passed by the Supreme Court on July 18, approving our report and largely accepting our recommendations. On that day, the Supreme Court tasked the committee to implement the order within 4-6 months and fixed the timelines for that.

We accordingly resumed working, invited the president and the secretary. The president didn’t turn up and despite the timelines being fixed by us nothing was done by the BCCI.

We were therefore constrained to submit a status report to the Supreme Court on three occasions. And finally, since there were impediments and obstructions, our timelines were not being followed or adhered to, the Supreme Court after hearing the BCCI has passed its order, so it’s a logical consequence.

Do you think there was ever a chance of a middle path if the BCCI had been co-operative and sat down with you and discussed the recommendations instead of opposing it? 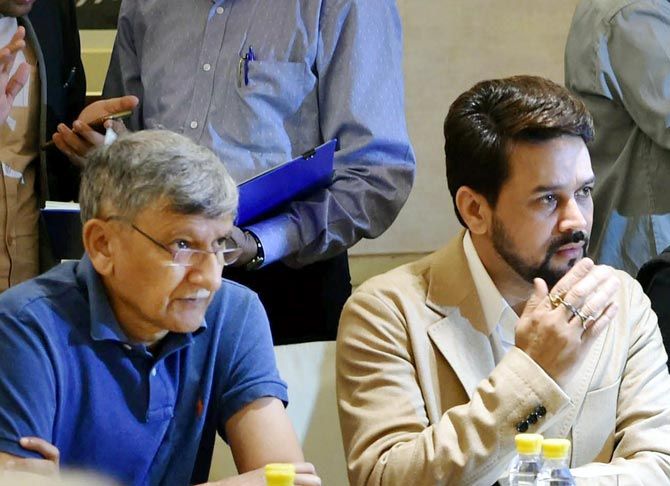 But was there a way out for the BCCI officials before July 18?

Before July 18, we had submitted but yes if something had come up we might have seen that and whatever could have been said on that we could said to the Supreme Court.

Actually they were right in not approaching us, instead objecting to our report in the Supreme Court.

With the BCCI president and secretary gone, and a new set of administrators taking over the day to day running of the board, is there any danger to forthcoming cricket series that will happen like the England series and the Australia series next month?

There should not be any confusion on it at all. The game should go on and the game will go on.

As per the Supreme Court verdict, the senior most vice president to act as the president and the present joint secretary will assume the work as secretary. If the current vice presidents are not eligible as per your recommendations like age limit of 70 years or cooling off period for three years or not more than three terms for office bearers among others, what would happen in such a scenario?

Look I haven’t read the order what have been observed by the Supreme Court. As I am told, the Supreme Court would be deciding about the team of administrators later after hearing the amicus curiae Gopal Subramanian and Fali Nariman, they would be suggesting a name.

Would you be suggesting any name?

No, no. If the Supreme Court has not given that task to us, why should we touch the subject? We will not.

Since the time you took over in January last year till now when the Supreme Court has finally delivered the verdict, what has been your major observations about how BCCI runs cricket in this country?

We had discussed the matter with almost 74 people from different walks of life, the stakeholders like the top players of the country, number of journalists, chartered accountants, all present administrators of the BCCI, some former administrators, the stakeholders, cricket fans, advocates, former chief justice and former judges. All these people gave us inputs and we found that the time has come that the BCCI should be run professionally, it should not have any monopoly of a family or of an individual.

There should be full transparency in its actions, the office bearers must be accountable and there should be good governance and the day to day management should be in the hands of professionals and that has been accepted by the Supreme Court.