'I have been made a scapegoat because the BCCI's ACSU unit wants to show to the world that they are doing something.'

'Would the Board have acted in the same manner if a big player was involved?' 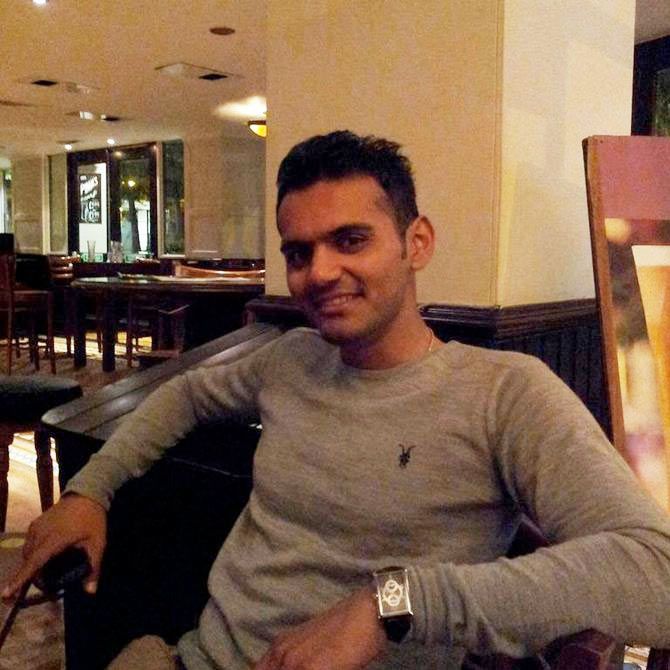 IMAGE: Hiken Shah. ' I can never think of betraying this game for money.'

Hiken Shah, who was handed a five-year ban for allegedly making a corrupt approach towards fellow player Pravin Tambe, vows to file a case against the Board of Control for Cricket in India.

Insisting he has been made a "scapegoat" because he is a small-time player, the 31 year old alleged that the BCCI's Anti Corruption and Security Unit, ACSU, penalised him despite not having any concrete evidence "because they want to show to the world that they are doing something."

Hiken tells Aruneel Sadadekar/Rediff.com how life has changed after the ban and his next course of action to get it revoked.

What is your next course of action?

Frankly, I never thought such a thing would happen to me. Despite the allegations, I was confident that I will come out clean of all this fixing mess. I have been associated with cricket and the BCCI since I was 17 or 18 and have never been on the wrong side of the law.

Obviously, I will fight my case and move the high court by next week after consulting my lawyer.

You were reported by your Mumbai teammate Pravin Tambe. What is your side of the story?

I know Pravin since 10 years. We have been playing in Mumbai maidans. In March last year, I called him to meet me at Oberoi Mall in Goregaon (northwest Mumbai). I wanted his help to procure an admission in the D Y Patil College as he plays for the club.

Yes, I thought of making some money by getting an admission done, but there was some serious misunderstanding from his side. He never mentioned it at that time.

Later, I got a call from the BCCI saying they wanted to meet me regarding serious 'fixing' allegations.

I was playing in England for a local club. The ECB (the England Cricket Board) barred me from playing in their country. I was forced to return and have not faced a single ball after that. IMAGE: Hiken Shah in action against the touring England side in 2012 at the D Y Patil stadium. Photograph: Facebook

Why would Tamble do this to you?

BCCI ACSU chief Ravi Sawani interrogated me. He barred me from talking to Tambe, saying serious action would be taken if I tried to influence the case.

Sawani also forced me to accept the word 'fixing.' I objected, saying I never used the word, but he told me, 'You have used the word fix-up to Tambe; we have proof and if you don't accept it, we will disclose everything to the media which is waiting downstairs. You will lose your job.'

The BCCI threatened me to admit I made a fixing approach.

I have no clue why Tambe said this. When I think of him, I can only rewind to our partnership in a match against Gujarat during the 2013 Ranji season.

We were playing at Valsad. I had four stitches on my right hand, which is my bottom hand, being a left-hander.

A left-arm spinner was bowling and the instructions were that I would play him to save Tambe (a right-handed batsman) from facing him. I played in that condition for 10 overs to save my team and teammate.

Now, I have no team and teammates!

After you were suspended, what was your reply to the BCCI?

Why don't you ask the BCCI to disclose my reply?

Also ask the Board to show the proof against me.

On the basis of a statement from one player they have banned me. Tomorrow, if I say this player approached me, will they ban him?

I was a small-time player who has never played in the IPL. So it is easy for the Board to throw me out without facing any repercussions.

I want to ask: Would the Board have acted in the same manner if a big player was involved?

But there are also allegations that a friend of yours approached a 'big player'?

Yes, I know of such allegations. If he approached, how do I become a fixer?

He is a friend of mine, but that doesn't mean he has influenced me. I have stopped talking to him after that incident.

I have been made a scapegoat because the Board's ACSU unit wants to show to the world that they are doing something.

I have been part of Mumbai's Ranji team since the inception of the IPL. Why will I make an approach now when I know that the Board has become very strict after the 2013 IPL spot-fixing scandal? You had a sensational debut season in 2007, scoring a hundred in your second Ranji match against Maharashtra. Later, you moved to Jammu and Kashmir and returned to Mumbai. You could never cement your place in the side.

In January 2015 you also mentioned your frustration at being dropped after playing only two matches.

I had five successful seasons with Mumbai before being dropped last year. I was scoring heavily in local matches and hoping to make a comeback.

Since the last eight years I have been playing in England in local league games. It helps me make money and also keep in touch with the game.

Frankly, I was happy with what I had and now I've lost everything. I can't play.

All my teammates, for obvious reasons, keep a distance from me. My family has stood behind me like a wall, but then our name is tarnished.

Even if I ever get out of this mess, there will be a black mark on my name.

You never played the IPL. Do you regret it?

I had given auditions ahead of the inaugural season of the IPL. I had trials with the Kolkata Knight Riders and Sunrisers Hyderabad. However, in Mumbai, every cricketer is branded either a four-day player or a T20 specialist.

They considered me suitable for the longer formats and I was happy about it.

After being dropped from the Mumbai side, how did you manage your finances? Was it difficult?

Not at all! I come from a lower middle class family. I grew up in a joint family where 10 of us stayed in a 280 square feet house.

Later, I bought a house in Borivali (northwest Mumbai), which was only possible because of cricket.

I played in England, which gave me sufficient money. I can never think of betraying this game for money.

Do any of your family members have to go through any kind of outcaste-like situation because of this ban?

My teammates stay away from me for obvious reasons. I am fine with it and completely understand their situation.

My son is too young to understand this. My wife has been my main support. Relatives don't show it, but I don't know if I have the same respect that I commanded earlier as a Mumbai player.

I want to fight for my lost pride. I am yearning to take a bat in my hand as soon as possible.