News
Business
Movies
Sports
Cricket
Get Ahead
Money Tips
Shopping
Sign in  |  Create a Rediffmail account
Rediff.com  » Cricket » I have made mistakes and learnt from them: Sreesanth

I have made mistakes and learnt from them: Sreesanth 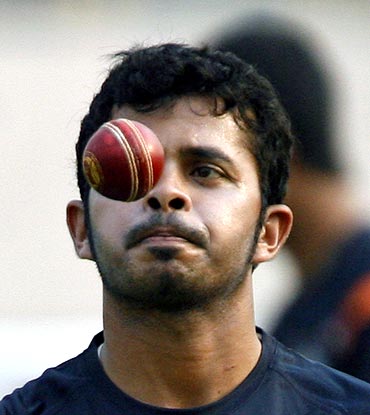 For S Sreesanth, the relief of making it back to the Indian team for the Test series in Sri Lanka is quite palpable.

Not so long ago, an injury lay-off and a disappointing showing for King's XI Punjab in the Indian Premier League's third season, virtually spelt the end of the road for the Kerala speedster. With the domestic season over and denied permission to play county cricket, he was forced to slog it out at the National Cricket Academy in Bangalore, with no real chance of impressing the selectors. However, with all the recently-tried young pacers failing to make it make it count, he got a recall.

Sreesanth, though, is not taking things for granted; he says he has changed for the good this time. So do not be surprised if you see him refrain from his usual tactics of charging at batsmen or having a few words with them in the upcoming matches. From now on, he says, his "bowling will do the talking".

In a freewheeling conversation with Senior Associate Editor Harish Kotian, the comeback man discusses his frustration at being left out of the team and the born again player he now is.

How big a relief was it to make a comeback to the Indian Test squad?

It is a great feeling. Very honestly, I am thrilled, because I always believe that there is no greater feeling than playing and serving your country. Thanks to the selectors and Board for showing faith in me. I will make sure I make the most of this opportunity.

Did you expect to be selected to the Test squad for the Sri Lanka tour?

I had a feeling that I would get into the Test squad because I had done well in the last series I played. I will make sure I perform to the best of my abilities, because opportunities don't come every time. I just want to keep it quiet and let my performance, rather than anything else, speak.

How tough are the conditions in places like Sri Lanka, where the pitches are either low or slow?

I always believe there is no fun without challenges. I just want to enjoy all those challenges because there are a lot of big series coming up, like the Australia and New Zealand series at home. Then there is the South African series. This is the start of the season for me and I just want to make sure that all the training I did at the NCA [National Cricket Academy] and in Kochi is put to use.

In the IPL [Indian Premier League] I did not play many games for King's XI Punjab, so I was training all the time. I am hoping it all serves me well ahead of the busy season so that I can stay strong and fit throughout and perform for my country.

How important is reverse swing for a fast bowler in sub-continental conditions? How does the team look after the ball once it loses its shine?

It is very important. Even conventional swing with the new ball is very important in these conditions because the Kookaburra does not reverse as much as the SG ball will reverse in India. It is going to be tough. Sri Lanka have got some very good batsmen. I am looking forward to playing against them because they have got a few world record partnership-breaking batsmen in their line-up. In the last few years they had some big partnerships which show that their batting line-up is talented. They are going to be very tough opposition; it will be a great challenge. It is not going to be a cakewalk.

I am going to make sure that I go there and be patient. I have not played much cricket recently, so I will take my time, get used to the conditions and use of the matches I get to pull myself up.

2009 was a difficult year.  You struggled with injuries and also got a final warning from the Board for your conduct? How tough was it personally to cope with everything?

Personally, it was damn tough. Thanks to my family, my dear ones, my friends and everyone who supported me, I could get through it. Actually, thank you to the Board as well for giving me an opportunity to play county cricket [last year]; they also allowed to me train wherever I wanted.

I am still under the BCCI contract, which is a big boost. Being under contract really gives me the confidence that I am still in the picture. That was a big motivation because I used to tell myself that I am still a contracted player, the Board still trusts me and one day I will definitely get a chance to play for India again. I love playing cricket, but the want to play cricket is more when it is taken away.

So will you be cutting down on your aggression after that final warning from the BCCI, or will you still continue to sledge batsmen?

I am from Kochi and have only seen players playing on television. I don't have any role models, except for Dennis Lillee Sir or Allan Donald. There wasn't anybody in Kochi whom I could follow properly. I followed them [Lillee and Donald] and I wanted to be like them.

Now the real Sree -- which you will see -- has come out since my county stint [last year]. I have mellowed down; I have changed. I am a different cricketer. I still have the fire or passion in my belly, but it will be in bowling spells rather than anything else. You won't see me having heated conversationshopefully!.

So no more clashes with batsmen?

I just want to run in hard, hit the deck hard and bowl well. I don't want use foul language or anything. I just want to make sure that I play good cricket, because cricket is a gentleman's game. I have made mistakes and learnt from them. I want to improve as a cricketer, a human being, and give my best for the country.

I want my bowling to speak for me. In fact, not only my bowling, my batting, my fielding. Overall, I want my cricket to speak. During the second Test against Sri Lanka in Kanpur, you had admitted that you thought you may never play for the country again? How did you overcome that tough period?

I thank my circumstances, very honestly. I can't really thank one person, because there was my family, my friends, my team-mates from Kerala, the Indian team, the Warwickshire county team, T A Sekhar Sir and Dennis Lillee Sir too. Everybody really pushed me during the tough times and encouraged me. They all thought I could do it and comeback to the Indian team.

Everybody was worried about my focus and commitment, so I changed. I focussed all my energy on cricket and made a comeback. That is exactly what I am doing right now and it is paying off. I want to continue what I am doing because it is giving me real good success. I was unlucky to get swine flu [last year] otherwise I would still have been playing in the Indian team.

How would you rate the 5 for 75 you took against Sri Lanka in your comeback Test in Kanpur last year? Would you say it was the turning point for your career?

Not really. The turning point would be 2006. I never thought I would play even one year for India. When I went to the West Indies everything changed. We won a Test match in Jamaica, we won the Test series in the West Indies after a long time. Brian Lara was around.

I will always cherish that series, because I believed in myself. Rahulbhai [Dravid] came up to me -- even Anilbhai [Kumble] and most of the other team-mates made me believe that I belong here. Rahul kept telling me 'you should get a lot of bowling'. He said 'you and Munaf are the best new ball bowlers I have seen; be consistent and you will do well'.

That gave me some hope. This success against Sri Lanka came now, but that West Indies series really motivated me. I would rate my performances in the West Indies and the South African series as the turning points of my career. Also the Twenty20 World Cup win where we could stand up and say here we are.

Have you cut down your pace in view of your recent injuries or do you still bowl at the same speed as you used to when you made your international debut?

India has a busy schedule this season with non-stop cricket leading up to next year's World Cup. How important is it to keep performing consistently in such a busy season with so much competition around?

It is very important to keep performing consistently. In cricket, I don't think about tomorrow; I play for the present and that is why I will never preserve my body for the next game. I will never be scared of injuries, because injuries are always bound to happen to a fast bowler. I am not worried about it at all.

So what targets have you set yourself for this season?

'Passion, not aggression, drives me'