Former India wicketkeeper and chairman of selectors Kiran More says captain MSD needs to move up the order. 'He knows when to attack, how to slow down and take charge.'

It has been a tough time for Mahendra Singh Dhoni and I can only feel for the man.

He is all heart and passion. So it is disappointing to see him being defensive at media conferences and having to explain his actions.

I really do not understand this idea to gag the team or the?support staff. It is of a huge help in these troubled times if you can have someone else who can share the burden with Dhoni.

This will ease up the captain and let him concentrate on the job on hand. What is happening now is that because the Board has disallowed the others from speaking, the onus is on Dhoni to speak to the media a day before a game.

He then faces upto the media after a game if the team loses. 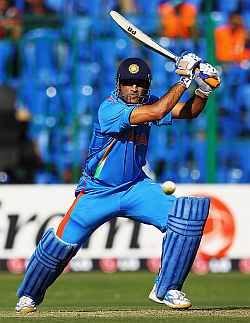 Just for Dhoni's sake, I wish the BCCI allows the coach Gary Kirsten to also speak to the media. What could help matters if the team fronts one player/ coach to the media every day like all the other teams have been doing during the tournament.

It helps matters in a big way. If there is regular interaction, the captain does not have to be answerable to all the pent up queries at one go. Now we have a week's gap, get ready for more defence from an usually aggressive Dhoni on Saturday.

This is just not done. Let's change the rules of the game a bit.

It helped in a big way in 2003, when Sachin Tendulkar stepped forward in Zimbabwe asked for restraint from fans during the World Cup. Things changed from thereon for the team. Even later in Australia in 2007-08, Anil Kumble's team fronted all the top players to the media and took the wind out of the Australia media.

Once freed of this task, Dhoni can think about what else he can offer the team on the field. I think Dhoni is the man who needs to move up the order. He is the best man for the powerplay overs. He knows when to attack, how to slow down and take charge. He reads the game better than anyone else.

We are currently number two in the world in one-day cricket. This tournament is important to show the world why we deserve to be number one. The only other team who plays more one-day cricket than us is Australia. But they use their players sensibly and rotate them.

Here we have a few ODI and Test specialists who only play that particular format. We needed to have used our players as well sensibly in the lead-up.

But before we go around sounding alarm bells, I just realised one fact: we have just lost one match in five games. So we are not that bad, actually.??

Calm your nerves, take a deep breath and say in one voice to the team: There is no reason to panic.