Former India captain ANIL KUMBLE says Yuvraj was the obvious hero of India's quarter-final victory over Australia, but it was the bowlers who set it up.

I wasn't at all surprised to see the clinical manner in which India disposed of Australia's challenge.

Having been a part of the last few campaigns, I know just how much the team was disappointed after the last two World Cups. Crashing out in the first round last time hurt as much as, if not more than defeat in the 2003 final to Australia, and it was apparent that India didn't want another heartbreak, and that too in front of their own fans.

Yuvraj was the obvious hero, but I firmly believe it was the bowlers who set up the victory. When you are playing the quarter-finals of the World Cup, you expect a stiff fight, no matter if the opponents are Kenya or South Africa. This was Australia, unbeaten in the last two tournaments, and for the Indian bowling to restrict them to 260 for six was a fantastic effort. 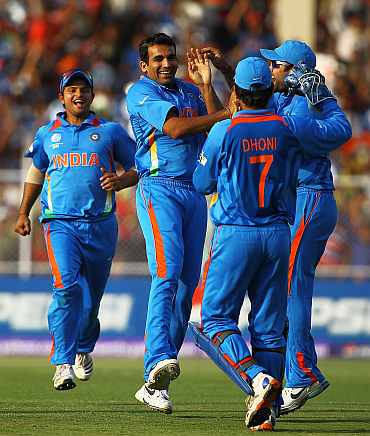 Having myself bowled in the early stages of the innings, with field restrictions in place and two men perforce required in catching positions, I know what it takes to bowl on unresponsive tracks against quality batsmen.

That's why Ashwin deserves a lot of praise. He has been sitting on the sidelines and watching the action during the early part of the tournament, much like Suresh Raina. Both men came into the team in the same match in Chennai, and both have made a huge impact immediately.

Harbhajan too had a very good game, except for the last over when he went for a few in the Power Play, while, as ever, Zaheer was phenomenal.

I have noticed Zaheer's development as an all-round bowler with great satisfaction and delight. When he is on song, he is virtually unplayable. He has been terrific throughout the World Cup, and Dhoni is fortunate that he has a lead bowler as versatile and accomplished as Zaheer.

Yuvraj, of course, is the man who can do no wrong, be it with bat or ball. Once again, he bowled a dream spell, a tidy ten overs which also brought him two wickets.

With Yuvraj bowling as well as he has, it's as if India have five full-time bowlers, which means Dhoni is less reliant on some of the more occasional part-timers like Raina, Sachin and Kohli.

Yuvraj's unbeaten fifty was a measure of his maturity and his temperament. At a time when the team could have panicked after Dhoni's dismissal, he took it upon himself to guide Raina through the early period, after which the duo batted with refreshing freedom. Cricket is all about looking out for your mate and playing as a unit. No one has done that better throughout the World Cup than Yuvraj.

His is a talent that just can't be ignored. Who would have thought three months ago that Yuvraj would take the World Cup by storm? He batted with great authority and struck the ball brutally towards the end, making sure there were no late stumbles. India didn't have anyone batting through the innings, but all those crucial partnerships and contributions from Sachin, Gambhir and Kohli before the Yuvraj-Raina stand again reiterated the need to deliver as a group.

I was perplexed by the sweetness with which Raina struck the ball right from the beginning. His timing was brilliant. It's never easy to sit on the bench for a long time, and then come out and perform in a high-pressure situation. What he did in a big game was the mark of a class player.

As impressive as the bowling and the batting was India's fielding. This is the best India can do as a fielding unit, because we are not the most naturally athletic. The signs are very encouraging  all three departments are coming along nicely.

Don't they say something about peaking at the right time?!