'India need a second spinner in the eleven'

Unless there is a dramatic improvement in the overall bowling and fielding, India, says ANIL KUMBLE, might have problems against teams with stronger and more consistent batting line-ups than Bangladesh.

It's still very early in the tournament, but India need to get their bowling sorted. If they are looking to use Sreesanth up the order, then he has to get them wickets; otherwise, they need to rethink their bowling strategy.

He was trying too much against Bangladesh and had a very poor game. Perhaps, his thinking was that with 370 on the board he could experiment somewhat. But this is the World Cup; you have to bowl smartly and not give away anything you can avoid giving away.

Munaf, actually, and Zak were very good examples of how a faster bowler needed to bowl --- you have to bowl wicket-to-wicket and make it so it's just not easy to score runs. If you frustrate the batsmen and put them under pressure, in this situation, they'll make mistakes.

I'm not sure what India's bowling strategy was and how bad Nehra's sore back is, but they have to seriously look at getting a second spinner into the eleven.

Bangladesh is a decent team at home; young and enthusiastic, but they were not seriously expected to stretch India, which they didn't, thanks to the runs on board courtesy Sehwag and Kohli. 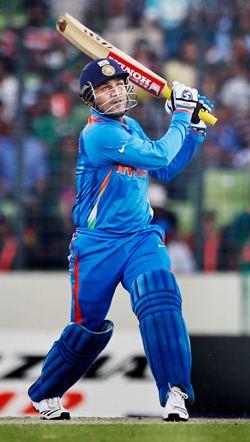 But unless there is a dramatic improvement in the overall bowling and fielding, India might have bigger problems against teams with stronger and more consistent batting line-ups.

Meanwhile, the other two games we got to see over the weekend went along expected lines, with New Zealand creating a few records against a Kenya looking out of their depth, and Sri Lanka, waltzing to victory against hapless Canada.

I've said this on air too, but I do believe that we should really look at giving only the two best associate teams an opportunity to play in something like the World Cup -- so 12 instead of 14 teams. One-Day cricket isn't like the T20s, where it's not just about skill and it's much shorter, so Associate teams can compete much better.

At the same time, Associates also need to play some top-flight competition regularly, not just once in four years, to help them get quality experience and the confidence that comes with that experience. For that, the ICC needs to look at a sensible programme that uses two things: 'A' teams of top-level countries and geographical proximity.

I'll explain this. Most top countries, like India, Australia, England, Sri Lanka and South Africa, also have very strong second elevens, the A teams. Both benefit from this arrangement: Associates get quality opposition and A team players get the opportunity to turn out for their country in international competition.

The ICC could also look to use the fact that every country is not playing constantly. Perhaps, you could have Kenya and Zimbabwe play a few games in South Africa; Ireland and the Netherlands go across to England, or Canada travel to the West Indies on exposure trips.

In any World Cup, we'll probably get the odd upset, a big team having a bad day and a minnow taking glorious advantage, but, for the most, if we want a tight, quality competition, we need it to be an even playing field.