The BCCI's decision to turn down a proposal to name the trophy for the India-England Test series after the legendary Tiger Pataudi prompts Faisal Shariff to dwell on the legacy behind the silverware in Indian cricket.

Last week, thanks to Sharmila Tagore, Indian cricket fans, journalists and, in fact, the entire cricketing fraternity in India got a nice refresher course in history of the sport in the country.

Tagore unwittingly provided everyone an insight into what Indian cricket's rich legacy is.

It really started with her suggesting that the trophy for the Test series between India and England be named after her late husband Mansur Ali Khan 'Tiger' Pataudi, the legendary Indian cricketer and captain.

While Tagore's argument may have been correct, I believe her claim did not hold good. 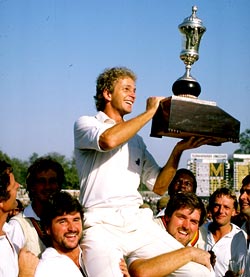 Why? Simply, because of tradition and history.

The Board of Control for Cricket in India may be blamed for everything from the market crisis in Europe to the job cuts in the USA, but you can never accuse the BCCI of not following tradition. The only problem is that the BCCI does so without the fanfare of a cricket board in say England or Australia.

Did you know, India retained its position last season as the winner of the Fatehsinghrao Gaekwad Trophy?

That trophy given to the winners of an India-West Indies Test series in India is named after the late Fatehsinghrao Gaekwad, the maharaja of Baroda and a doyen of Indian cricket administration.

Till the 1980s, every Test series played in India (including India versus Pakistan Tests) were played for the Anthony De Mello Trophy.

Only after the Indo-Australia Business Council offered to institute a Border-Gavaskar Trophy for India-Australia Test series did the name for those Tests change. Before that, even India-Australia Tests series in India were played for the Anthony De Mello Trophy. The late Mr De Mello was a BCCI top gun in the 1940s and 1950s.

Did you know that the L P Jai Trophy is awarded to the batsman scoring the fastest hundred in the knock-out stage of the Ranji Trophy since 1970-1971. It was donated by Mrs Kantaben L Jai in the memory of her late husband L P Jai.

The J M Ghorpade Trophy goes to the winner of the Baroda versus Gujarat Ranji Trophy match.

The P N Sahani Trophy goes to the winner of the Haryana versus Punjab Ranji Trophy match.

The Hyderabad versus Andhra Ranji Trophy match is played for the P S Venkateshwara Rao Trophy.

While we all know that the winner of the Ranji Trophy gets massive silverware, do you know the name of the trophy the runners-up get?

Well, it is the Imperial Tobacco Company Trophy, which has been in existence since 1946.

Some other cricketing trophies:

The context for some trophies have changed. For example, the zonal Ranji championship does not take place any longer; so, in some cases, the teams play the one-day tournaments for these trophies.

Elsewhere, the trophies are another reminder of the era that was in Indian cricket when everything was on zonal basis. Thankfully, that era is gone in everything except in terms of the constitution of the national selection panels!

In 2008, a year after the Pataudi Trophy was instituted, M S Dhoni received the Anthony De Mello Trophy for beating England in a surcharged series following the Mumbai attacks. 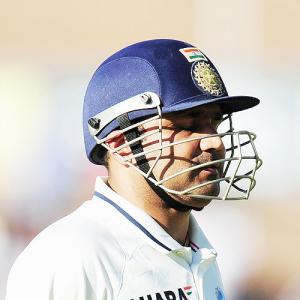 Why not open with Rahane? Have Sehwag at number six!